After enjoying a hearty breakfast in our hotel, we hopped in the car for the 25 minute journey to Marazion on Cornwall’s south west coast to visit St. Michael’s Mount.  We parked in the main Folleyfield car park which charges a flat rate £4 all day fee.  The car park is only a few minutes walk from the causeway but if you prefer to try and park slightly nearer there is a smaller car park charging 50p more but you may need to turn round if it is already full.

St. Michael’s Mount is a small rocky island, 500 metres from the shore in Mount’s Bay and is crowned with a medieval church and castle.  It was the site of a monastery in the 8-11th centuries and is now twinned with Mont Saint Michel in Normandy, France.  I’ve not had an opportunity to go there yet but my younger son visited awhile back on a school trip.

We had pre-booked a 10.30 a.m. timed entrance ticket to visit the castle.  Standard adult admission is £11.50 but free to members of the National Trust.  If you just want to stroll across the causeway and explore the small village at the foot of the mount there is no charge to do this.

The granite causeway is covered by sea at certain times of day so it is important to check the tide times prior to visiting.  It’s passable for two hours either side of low tide and at other times is accessible via a small boat but this was not running when we visited.  The stone setts were quite damp underfoot but although the path was uneven in places, it wasn’t slippery but I do recommend wearing a pair of sensible shoes.

The weather wasn’t at its best for our visit but it didn’t stop us enjoying our walk across to the island.  First, we explored the tiny hamlet at the foot of the castle which is now only home to a handful of cottages where around 30 people live and work.  Back in the 1800’s it was a flourishing village with 300 inhabitants and over 50 homes.  The buildings that housed the village laundry and pilchard press are still in use today but for different purposes including the gift shop and café.  During the Mount’s long history it has seen life as a priory, fortress and a place of pilgrimage before finally becoming the private home of the St. Aubyn family in 1659.

We had our tickets checked before climbing the steps up to the castle.  The walk up to the top is quite steep and although there are handrails visitors have to navigate up a series of stone steps, gravel slopes and uneven sized slabs but it’s worth the effort as there are some stunning views to be had from the top, even when it’s raining.

We followed a one way, self guided tour through the castle which we entered through a heavy medieval doorway that led us into the Entrance Hall.  This contained a collection of weapons and the coat of arms of St. Aubyn’s on one of its walls.

Continuing, we moved into St. John’s Room with its panoramic views out to sea.  This study houses an historical tidal clock which was very useful for planning trips to the mainland.  Our tour then took us into the Library and Great Hall with its wonderful stained glass windows.

My favourite part of the castle was the Blue Drawing Room where Queen Victoria enjoyed afternoon tea with the housekeeper during an unannounced visit in 1846 when the family were away from home.  Finally, we looked in the Priory Church, a 12th century chapel which is still in use today for Sunday services.

Back outside, we stepped onto the terraces high up on the castle walls where we were rewarded with some breathtaking views back across the causeway and down onto hillside gardens which surround the castle.

After viewing the battlements we carefully made our way back down the steep path towards the causeway. We passed the formal, terraced gardens which were designed in the 1780’s but as they are only open until the end of September we could just catch a glimpse of them from afar.  Despite being in an exposed position with strong winds, the Gulf Stream tempers the climate here so that frosts are a rarity creating a micro climate where numerous tender plants are able to survive.

Fortunately, the rain clouds had started to give way to a glimmer of sunlight as we strolled back across the causeway which was a promising sight.  Before returning to the car we took the opportunity to explore the pretty little village of Marazion where we found a selection of cafes, galleries and gift shops.

The large car park was almost empty when we had arrived a couple of hours earlier but on returning, there was hardly a space to be found so it’s a good idea to arrive early and beat the crowds if at all possible.

From Marazion it was then only three miles to Penzance where we found some unrestricted parking along Belgravia Street very close to the town centre.  Penzance is a seaside town and popular tourist destination. It’s also the final stop on the Great Western rail line in the south west.  We were ready for a bite to eat and a coffee so we found a pleasant pub for some lunch before taking a look at what the town had to offer.

The centre is pedestrianised and lined with small shops and cafes, many offering the local delicacies of Cornish pasties and crab sandwiches which we intended to sample during our stay in the county.  After browsing the shops we continued past the Market House and along Chapel Street.  The Market House historically contained the town’s market and guild halls, with prison cells below the market hall.  Nowadays it’s a branch of Lloyd’s Bank.  Chapel Street is the most historic street in Penzance and runs from the centre of town to the harbour and is lined with an assortment of antique shops and galleries.

We enjoyed a stroll around the working harbour which has been the lifeblood of the town for hundreds of years.  Along with nearby Newlyn, Penzance is the first secure harbour on the coast of the English Channel when approaching from the Atlantic, it still operates fishing boats as well as regular passenger services to the Isles of Scilly.

Along the seafront at Battery Rocks, we came across an art deco open air lido known as the Jubilee Pool.  It’s only open to the public during the summer months but appeared to be available to clubs off season as some brave people were actually braving the elements and taking a dip.  Some, but not all of them were wearing wetsuits and it made me feel cold just to watch them.  The lido also contains a sheltered sun terrace and small café which would be pleasant during warmer weather.

We continued along the promenade until we spotted a sign for the Morrab Sub Tropical Gardens which are free to visit and link the seafront to the town centre.  This sheltered three acre garden surrounds a stucco villa, now in use as the library.  The park boasts a Victorian bandstand, fountain and numerous sub-tropical and Mediterranean plants which flourish in Cornwall’s mild climate.

It was then not far to walk back to the car.  Penzance had been a lovely small town to visit and we were soon on our way again, this time to the picturesque village of Mousehole, pronounced ‘Mowzel’.

We parked along the seawall on the approach to Mousehole, which is free and also avoids the narrow, twisting roads in the centre.

Walking into the centre didn’t take very long and on arriving at the waterfront the village looked gorgeous with its picture perfect tiny harbour and stunning views.  Mousehole was known as the centre of the Cornish fishing trade for its shoals of pilchards and became a bustling little port with ships lined up waiting to export the cured pilchards to France.

The sun had put in a welcome appearance and we enjoyed a stroll along both sides of the harbour wall before taking a look at the village itself.

It’s one way streets are incredibly narrow so we were glad we had parked further out and were able to explore the quaint little shops, pubs and cafes on foot.  We decided to walk back to the car along part of the South West Coast Path which hugs the shoreline.  After a short walk along the edge of the pebbled beach, we found a flight of steps back up to the road which, by chance, brought us out near where we had left the car.

As we’d passed through Newlyn on our way to Mousehole, we called there on our way back finding street parking outside the RNLI visitor centre (currently closed).  We enjoyed a short walk around its fishing harbour and couldn’t resist taking a look at some of the boats moored in the harbour.  Newlyn is a working harbour and isn’t quite as pretty as its close neighbour Mousehole, but certainly worth a short stop.

It was then around 5.30 p.m. by the time we returned to our hotel in Camborne after a lovely first full day exploring Cornwall.  Dinner in the pub, a catch up on the news and more planning for the next day. 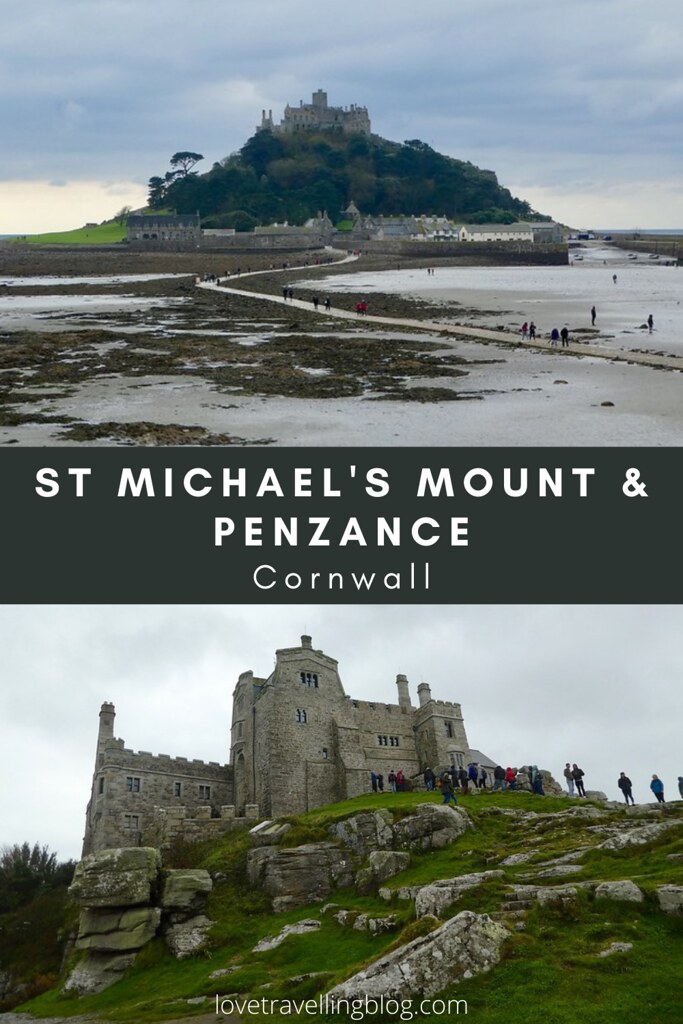