This is the first in a series of posts on our recent 10 day road trip across Ireland – starting in Derry/ Londonderry before travelling along the Causeway Coast and then down the Wild Atlantic Way – I hope you enjoy reading.

We arrived into City of Derry Airport the previous evening, flying with Loganair from London Stansted.  The flight took just 85 minutes, passing quickly with light refreshments handed out by the cabin crew.  Arriving into Derry was a pleasant contrast to the hectic Stansted and we’d soon collected our bags and were in a taxi to the city centre.

The airport lies nine miles north east of the city centre with taxi fares averaging £12 for the 20 minute journey.  A Translink bus service (No.234) operates between the airport and Foyle Street bus station several times a day (£4 single) but as schedules vary it’s best to check before travelling.

We were staying at the Holiday Inn Express located on Strand Road in the heart of the vibrant city centre.  Our spacious room was well equipped boasting a stylish bathroom and had everything needed to ensure a relaxing stay.

After settling in and having a bite to eat we just had time for a short walk along the river past the Peace Bridge and to the Guildhall to give us a flavour of the city before returning to the hotel.

The next morning we were up bright and early to enjoy a buffet breakfast in the hotel before setting out for the day.  The Visitor Information Centre was located just around the corner on Waterloo Place so we popped in there to pick up some maps and leaflets.  The building is newly constructed with state-of-the-art interactive displays, close up views of the city walls and helpful staff.  There’s also a small theatre where we sat down to view a short film about the story of Amelia Earhart and her epic solo flight across the Atlantic in 1932.

Leaving there, it was then just a short walk to The Siege Museum on Society Street (standard admission £5).  The museum’s galleries cover three floors and relate the history of the Siege of Londonderry and of the Associated Clubs of the Apprentice Boys of Derry.

We viewed artefacts, banners and other memorabilia relating to the Siege which took place between 1688-89 when 13 young apprentice boys closed the city gates on the Catholic King James and a bitter 105 day siege followed with a great loss of life.  The Protestant battle cry of ‘No Surrender’ during the Siege remains a loyalist cry to this day.

From there it was just a few steps to St. Columb’s Cathedral on London Street (free admission but donations welcome).  This cathedral, designed in Gothic style was the first in the British Isles to have been built after the Reformation.  There was little change to the building from 1663 to 1776 when the Bishop of Derry added 21ft to the tower plus a very tall spire.  Unfortunately, 20 years later the additions showed signs of giving way and needed to be taken down and rebuilt leaving what we see today.

The cathedral’s interior is a joy to behold from its ornate entrance hall and staircase to its marble pillars and intricately carved pews and choir stalls.  There are many fine stained glass windows which have recently been restored, a selection of regimental flags, memorials and a large collection of historical items from the time of the Siege.

The Cathedral overlooks the city walls where we were heading next and we were just in time to join a Martin McCrossan City Walking Tour which take place daily at 10.00, 12.00, 14.00 and 16.00.  Tours depart from outside Level 4 of the Foyleside Shopping Centre on Carlisle Road with no pre-booking necessary (£4).

Derry is the only remaining completely walled city in Ireland and one of the finest examples of a walled city in Europe.  Our tour guide Charlene was very knowledgeable and clearly passionate about her home city giving an unbiased view of Derry’s political and religious troubles.  As we made our way along the walls landmarks were pointed out with their historical significance explained.

Seven gates surround the original town with Derry being one of only a few cities that never saw its fortifications breached from their construction in the early part of the 17th century, with cannons still in place to this day.  From the top of the walls we enjoyed some splendid views of the city skyline.

I would highly recommend joining one of these tours as they are very enjoyable and such good value for money.  There were around 30 people on our tour and everyone agreed that it was one of the highlights of visiting the city.

Following the walk we were ready for something to eat and being fans of the award winning Channel 4 comedy, a themed ‘Derry Girls’ afternoon tea was an absolute must.  These take place at the Everglades Hotel just a short taxi ride out of town (journey £4 approx) where the cast and film crew stay when filming locally.

The popular television comedy is set in the 1990’s and follows the lives of five teenagers living their lives amidst the backdrop of the Troubles.  The first series aired in 2018 with the second the following year.  The final series was delayed due to the pandemic but is being filmed at present.  Whilst walking around the city walls we had seen the Derry Girls mural portraying the show’s stars on the side of Badger’s Bar on Orchard Street.

The afternoon tea menu takes inspiration from the series with its cream horns, cone of chips, the famous Derry sausage roll bap and even a cheese and onion crisp sandwich.  Alongside these specialities are the usual afternoon tea favourites of dainty finger sandwiches, warm scones with cream and jam, desserts and a selection of cakes and macaroons.  Unlimited pots of tea or coffee and a delicious Derry Girls cocktail are also included.

It’s a very relaxing experience seated in either the hotel’s restaurant or lounge bar and diners each get to take home a souvenir Derry Girls Michelle plastic duck which now has pride of place at the side of my bath.  Boxes are provided to take away anything remaining on the cake stand and with such a large and varied selection I defy anyone to manage to finish it all there and then.  (Afternoon tea pre-bookable at £30 with accompanying walking tours of filming locations operating at certain times of year (additional charge). Derry Girls Afternoon Tea

Feeling very full after gorging on sausage roll baps, scones and cakes we took a taxi to the Bogside district so that we could visit the Museum of Free Derry to learn about the other side of the story from The Siege Museum which we had visited earlier in the day.  Standard admission £7, open Tuesday-Saturday 10.00-16.00.  The museum is located near Free Derry Corner, a historical landmark in the Bogside area.

Awarded Northern Ireland’s Authentic Experience of the Year in 2018, the museum tells the story of what happened in the city during the period 1968-1972, known as ‘The Troubles’ from the perspective of the Catholic Bogside area.  Galleries cover the civil rights era, Battle of the Bogside, Internment, Bloody Sunday and Operation Motorman and include film footage, photographs, letters and personal artefacts.

On leaving the museum we walked back up the hill to the city centre and then spent the next hour looking around the shops and visiting the Craft Village tucked away off Shipquay Street with its quaint small shops selling locally produced handmade products alongside cosy little cafes.

We then returned to our hotel for a short rest before walking across the Peace Bridge to enjoy dinner at the Walled City Brewery in Ebrington Square, a former army barracks that has been transformed into an attractive public space.  Stepping indoors, we were impressed by the gastro-pub’s stylish design from chandeliers fashioned out of beer bottles to its wall murals depicting some of its craft beers.

The selection of craft beers on offer changes frequently in groups of nine, these being displayed on a blackboard, numbered from light to dark.  Rather than choosing a pint, we opted for flights giving us the opportunity to sample a wider selection.  I’m not normally a beer drinker but with guidance from Catherine who was looking after us at our table, we both enjoyed our varied selection.

The food is reasonably priced at £23 for two courses or £28 for three.  We opted for Vietnamese style chicken wings and soup of the day for starters, moving on to a Thai chicken curry and pork with black eyed peas and smoked bacon for mains.  Each dish tasted delicious and portions so generous that we had to skip desserts.  Spending the evening at the Walled City Brewery had been a perfect end to our first full day exploring Derry and the short walk back across the Peace Bridge to our hotel was just enough exercise before settling in for the night. 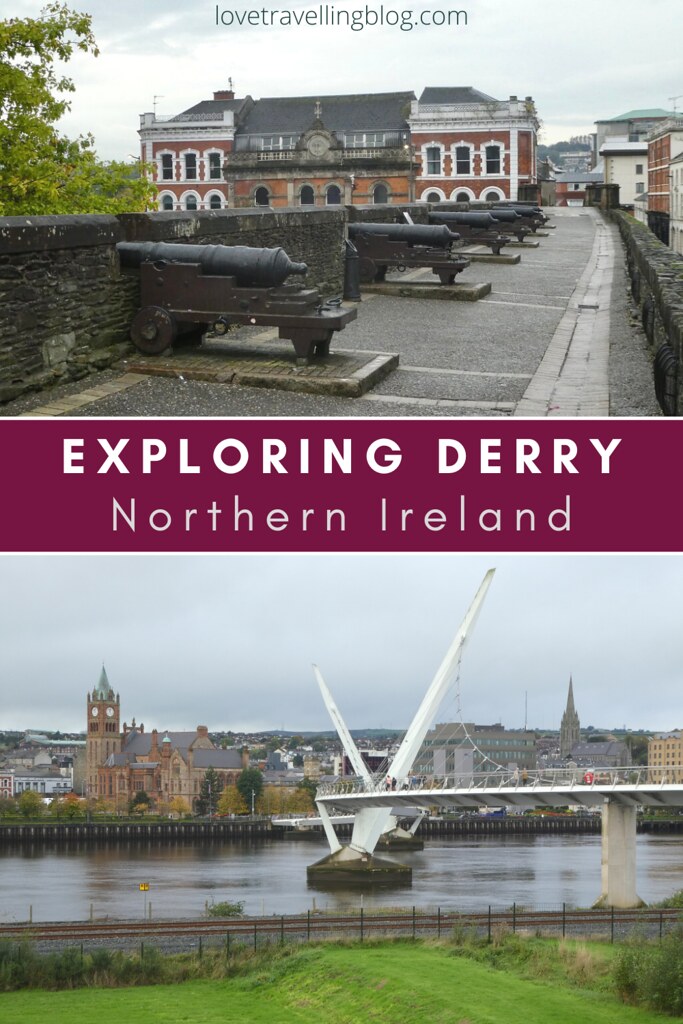