After checking out of our accommodation in the city centre we left our bags to collect later in the day and then walked the short distance across to Liverpool Central Station to take a train to Birkenhead Park.  Our plan was to continue along the same line to New Brighton later in the day so we were able to buy day returns to there and break our journey along the way.  (Standard day return £4.35).

Merseyrail were running on time and in a little over 20 minutes we were leaving the station and following signs to Birkenhead Park.  We were interested to explore there as it was the world’s first publicly funded park, opening in 1847 with the aim of creating a ‘park for the people’.

Birkenhead was also a major influence on the design of many other parks around the world including the world famous Central Park in New York.  We entered through the park’s large ornamental entrance gates which lead through open meadows and natural woodland to the park’s two lakes which were designed to be shaped like rivers.

The Swiss Bridge forms a decorative walkway over the east lake and this is one of the garden’s highlights.  Curiously, its design and name are contradictory as despite being called the Swiss Bridge it has a Chinese style which was a result of a compromise between the two leading architects.

Along with the Swiss Bridge, the Roman Boathouse is another of Birkenhead Park’s impressive features.  Perched on the lakeside it has ornate Doric style pillars and a red, pitched tiled roof.

Stepping inside the boathouse we admired the intricately pebbled mosaic floor and looked out over the lake through its ornate arches.  Located beneath the boathouse at water level we noticed a semi-circular opening which appeared to be for the storage of small boats.

Our morning stroll continued around a loop of the gardens passing the visitor centre which was sadly closed, before returning to the station to continue our journey.

The coastal town of New Brighton was to be our second destination taking just a further ten minutes to reach.  The town is located on the north eastern corner of the Wirral Peninsula, at the point where the River Mersey meets the Irish Sea.  It takes its name because the Liverpool merchant James Atherton purchased 170 acres of land in 1830 with the intention of building a seaside resort similar to Brighton on the south coast.  From its early beginnings it soon became a bustling seaside resort serving Liverpool residents as well as those from further afield, if not quite on the scale as its southern namesake.

It was just a short walk from the station down to the seafront which nowadays contains a mix of both Victorian and modern buildings.  As the café in the park was closed earlier we were ready for a drink and on spotting a JD Wetherspoon pub, called The Master Mariner along the promenade, we sat ourselves down on its outside terrace and ordered some drinks.

Feeling re-energised after a nice long break and two cups of coffee we set off once more for a stroll along the seafront.  Facing the sea are the usual seaside attractions including a funfair, cafes and fast food outlets all doing a brisk trade on this, the first weekend after the easing of lockdown.  We continued as far as the Floral Hall theatre then crossed the promenade to return along the seashore from where we had views back across the estuary to Liverpool.  It was a little overcast but we couldn’t complain as we’d enjoyed wall to wall sunshine on all the previous days of our visit to Liverpool.

We explored the exterior of Fort Perch Rock which was built as a coastal defence to protect the Port of Liverpool during the Napoleonic period and from there had a stroll along the beach as far out as the New Brighton Lighthouse.

The Lighthouse stands 95ft tall and is said to be modelled after the trunk of an oak tree but I couldn’t quite see the resemblance.  The lighthouse was built in 1830 and was in continuous use until it was decommissioned in 1973.

After continuing along the seafront slightly further we turned inland and had a look in some of the small independent shops on Victoria Road on our way back to the station.

Combining visits to both Birkenhead Park and New Brighton created an interesting outing and an opportunity to see more of Merseyside.  Back in the city centre we enjoyed one final meal sitting outside a café on Church Street and then collected our luggage from the hotel before heading back to Lime Street station for our journey home. 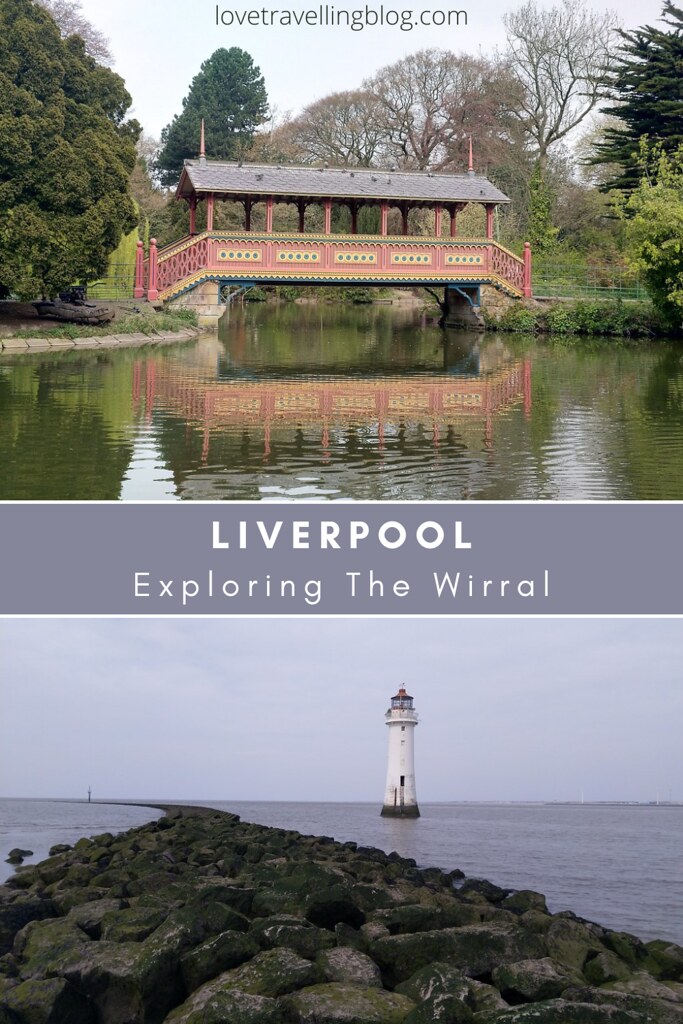