It had rained overnight but fortunately we woke to another bright, sunny morning.  After breakfast in Camborne, we set off for Falmouth located on the south coast, which is one of Cornwall’s largest towns.  The journey took us 40 minutes and our 10.15 a.m. arrival afforded us ample street parking opportunities along the seafront cliff road.  Facing the sea are several grand hotels which were built in the days when Falmouth was a destination of choice for Victorians taking holidays on the Cornish Riviera.

Leaving the car, we enjoyed the view overlooking Falmouth Bay.  The tide was in  and we spent a few minutes watching the large waves crashing into the shore.  Perched high on the headland was Pendennis Castle, a fortress built by Henry VIII to defend the country from invasion.

It was quite blustery as we made our way from the exposed open sea at one side of the headland to its picturesque sheltered harbour on the other.  Within ten minutes we had reached Discovery Quay which is home to Falmouth’s premier attraction, the National Maritime Museum Cornwall.  Standard adult admission is £14.50 and pre-booking a time slot to visit is recommended but not essential.  We had arranged to visit at 10.30 a.m. as this fitted in with our plans for the remainder of the day.

This timber clad building opened in 2003 on the site of a former boatyard.  Its spacious interior contains 12 galleries arranged over three floors documenting Falmouth’s history as a harbour and of Cornwall’s seafaring heritage.

The main hall features the National Small Boat Collection which was originally started by the National Maritime Museum in Greenwich.  Boats on display are all under 30ft (14.2m) and originate from all corners of the world.  A number of the boats are hung from the ceiling creating a hanging flotilla of small boats overhead.

Included in this collection is Ben Ainslie’s Olympic winning Finn dinghy and a Falmouth Quay punt which was sailed to the Antarctic.  The museum also features the story of the solo round the world expeditions by Robin Knox-Johnston and Ellen McArthur as their voyages started and finished in Falmouth.

Another interesting gallery was the RNLI Rescue Zone featuring an RNLI quad bike, rescue boat and a rescue water craft.  The rescue boat called Arancia went into service at Fistral Bay in Newquay and on numerous occasions has ben put into use.

Climbing the museum’s lookout tower and taking the lift down to The Tide, an underwater viewing area, were both temporarily out of bounds due to the ongoing pandemic.  Still, there was much to interest us in this large museum and if you have a liking for boats and anything nautical then I’m sure you would also find it an enjoyable place to visit.

Despite being unable to take in the views from the lookout tower, we thought they were just as stunning from outside the building.  Falmouth harbour sits at the mouth of the River Fal and is the deepest natural harbour in Western Europe.  Moored in this sheltered estuary were boats as far as the eye could see with everything from Royal Naval vessels through to yachts and family cruisers, it really was a splendid sight.

To one side of Discovery Quay is a large open plaza known as Events Square.  It’s surrounded by numerous places to eat and drink and where Rick Stein has one of his seafood restaurants.

From the museum we headed down Arwenack Street with its shops and cafes that leads onto the bustling Custom House Quay.  This used to be Falmouth’s main harbour which gained importance with the coming of packet ships.  These small, fast ships were the news carriers of their day and it was to Falmouth that overseas news first reached Britain.  Nowadays the quay is lined with quaint pubs, each of them with stunning views of the picture perfect harbour.

Lying close to the quay is the Prince of Wales pier which was constructed in the 1900’s.  It’s now the starting point for ferries across the bay and up the River Fal.  We had considered taking a boat over to the village of St. Mawes but as all ferry services were suspended that day due to strong winds, it wasn’t possible.

Instead, we continued along High Street which looked pretty with its rows of brightly coloured bunting strung across the road.  The town has a prosperous feel with lots of independent shops, cafes and galleries.  In 2018 it made the Sunday Times ‘Great Places to Live’ list and it’s easy to see why as it’s very appealing.

By the time we’d made it up to The Moor, a pleasant open square surrounded by civic buildings including the library and art gallery we were ready for some lunch so we popped into The Packet Station for a bite to eat and a little rest.  Feeling energised, we continued up to the top of the High Street from where we had more splendid views of the Fal River.

It was then back to the car and just a seven mile drive to the National Trust’s Glendurgan Garden at Mawnan Smith.  This sheltered exotic valley is open Tuesday-Sunday with standard admission £10.50 and free to NT members.  The garden was planted in the 1820’s by the Falmouth pilchard magnate Alfred Fox and being tucked into a ravine, it benefits from a humid microclimate enabling numerous sub-tropical plants to flourish.

There wasn’t much in flower at the time of our visit but we were still able to enjoy a pleasant walk down through the garden to the hamlet of Durgan on the Helford River.  This is accessed through a gated path at the far end of the garden.  From there, we followed a narrow footpath across some fields along the north side of the river.  After crossing a stile the path continued along the coastal path leading us to the small village of Helford Passage which looked very pretty with its cluster of stone cottages surrounding the small beach.

We were mindful of the time as the garden was due to close within the hour and as we didn’t want to get locked out and be unable to collect our car, we retraced our steps back along the path and into the garden.

We actually made quite speedy progress despite there being a steep uphill slope back to the garden’s main entrance.  As we were following a one way route, the highlight of our upward trek was a view of the garden’s cherry laurel maze which dates from 1833.  In normal times it’s open to the public and is definitely Glendurgan’s crowning glory.

There was sufficient time to take a quick look in the gift shop before returning to the car for our journey back to Camborne.  The end of yet another fun filled day in Cornwall, this time exploring Falmouth and the Helston River. 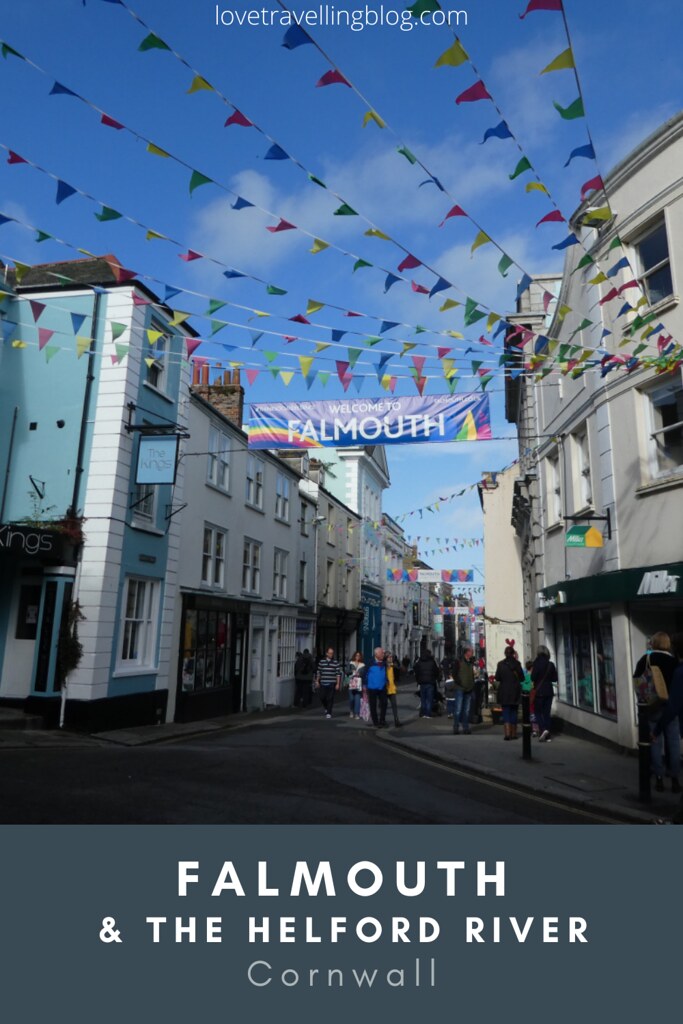 64 thoughts on “Day 5. Falmouth and a visit to the Glendurgan Gardens, Cornwall”