When considering where to go on holiday in these uncertain times, Belfast ticked all the boxes for us.  We’d still be travelling by air, feeling as if we were actually going abroad but with the security of knowing that we couldn’t be quarantined on our return as Northern Ireland is part of the United Kingdom.  Not only that, but as Aer Lingus recently launched six new routes to Belfast City Airport from the U.K. starting at £29.99, it couldn’t have been easier.

We travelled from Manchester on an ATR 72 taking only 40 minutes for the short hop across the Irish Sea.  If taking this route, do try to sit on the right hand side of the plane when travelling to Belfast as if it’s clear you are able to see the Isle of Man as you fly over.

On arrival into George Best Belfast City Airport, as we only had hand luggage, we were able to walk straight out of the terminal building and into a waiting taxi taking just 15 minutes to our hotel just south of the city centre. The airport also has good public transport connections with trains from Sydenham Station (just a short walk across the footbridge) taking 5-10 minutes and Bus 600 from outside the terminal taking a similar length of time into the city centre.

We’d been invited to stay at The Harrison, a newly opened boutique hotel in the affluent Queen’s Quarter.  Located on the leafy Malone Road this Victorian gem has been painstakingly restored by its owner Melanie Harrison and is an absolute delight.

Each of its 17 rooms are individually styled and named after a writer or artist linked to Belfast or one of its neighbouring towns.  When Melanie showed me into the C.S.Lewis suite it felt just as if I had stepped into his study as I could just imagine what it must have been like, sitting there in the bay window writing the Chronicles of Narnia.

The C.S.Lewis is a two bedroom suite with an antique king sized bed in the main room and a single in the smaller room.  Melanie offered no guarantee that my huge wardrobe in the dressing area would lead to Narnia in the Lion, The Witch and The Wardrobe but I still loved the suite with its original fireplace and bureau filled with antiquarian books.

Meanwhile, my son was settling into the Swift room on the floor above which was equally lovely.  Jonathan Swift served in the city and on a clear day it’s sometimes possible to make out the shape of Cave Hill which is thought to have inspired his timeless Gulliver’s Travels.

After a welcome pot of tea and some homemade cakes we freshened up in our luxuriously appointed en-suite bathrooms and then set off into the city centre.

Belfast is a compact city and being relatively flat it’s easy to get around on foot.  Our walk to The Crown Liquor Saloon on Great Victoria Street took no more than 20 minutes.  Dating back to the 1880’s The Crown is the only pub to be owned by the National Trust and is a marvellous example of the Victorian era.

We were shown to our table which was actually our own private snug.  The Victorians obviously knew how to social distance as our dining area came with its own private door, intricate Italian panelling, leather seating and an antique bell system to ring for service.

These private areas were created for people who preferred to drink without being seen.  Each snug comes complete with a gun metal plate that was used for striking matches.  It’s probably the most beautiful pub I’ve ever been in and the food was delicious too.

I opted for a steaming hot bowl of Irish stew with soda bread whilst on the other side of the table, the beef and Guinness pie went down a treat.  We couldn’t resist desserts and our raspberry crumble and clotted cream cheesecakes set us up for the short walk back to the hotel.

Back in my room, I sat in the window to examine the old Remington typewriter on the desk.  It had a qwerty keyboard but otherwise bore no resemblance to today’s modern gadgets so I think it would have taken me a very long time to type this blog post on it.  I did though enjoy sitting at the desk reflecting on our first few hours in Belfast and writing my notes in the moonlight.

I was soon asleep in the large comfortable bed nestled between the luxurious high thread count Egyptian bedlinen dreaming about our plans for exploring the city centre the next morning. 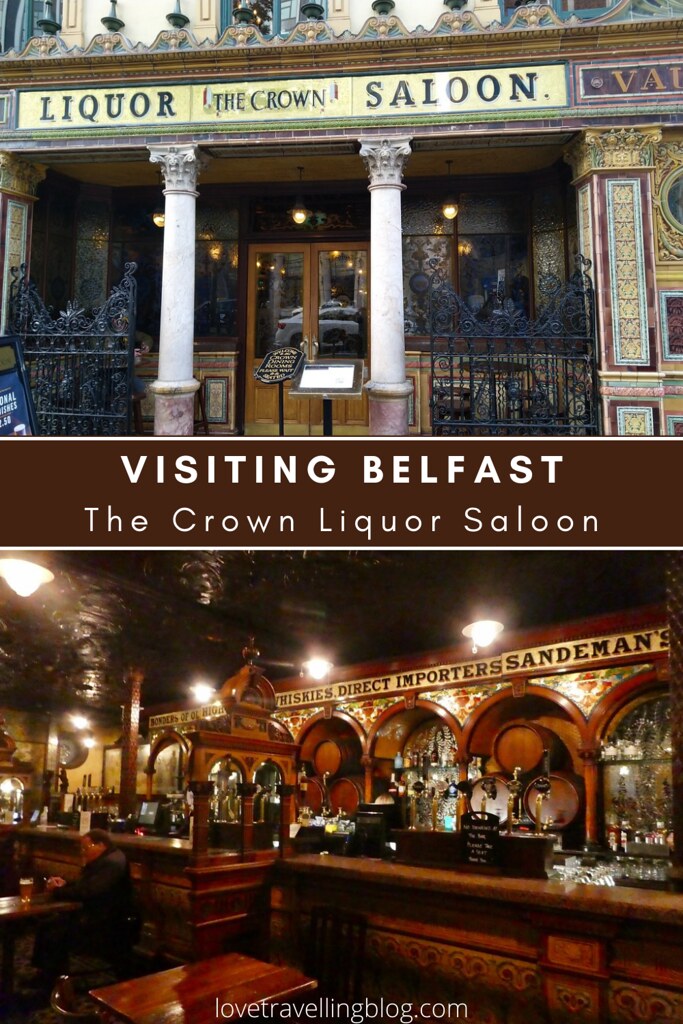