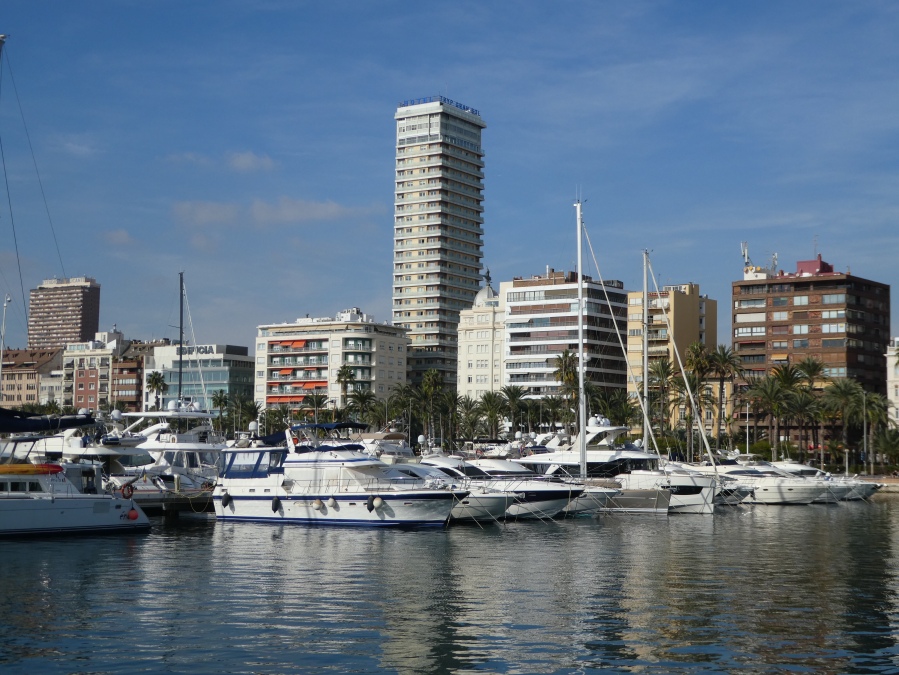 At the time of booking our 6.20 a.m. flight to Alicante it seemed a good idea, breakfast on arrival and a full day of sightseeing in a new destination. In reality, when my phone alarm woke me at 3.10 a.m. to the sounds of a howling gale and rain battering on the windowpanes I would have preferred nothing more than a few more hours snuggled under my duvet.  Somehow, we eventually managed to drag ourselves out of bed and were ready for departure just minutes before our taxi arrived at 4.00 a.m.

Our Ryanair flight was only the third of the morning to depart so Leeds-Bradford airport was exceedingly quiet and we were soon coming back to life with large cups of coffee in one of its airside cafes.  The 2 hour 20 minute flight over to Alicante was slightly bumpy due to strong winds but these must have been helping us on our way, as we touched down 20 minutes ahead of schedule at 10.00 a.m. local time.  I managed to sleep for most of the flight, only waking with a jolt when the aircraft wheels hit the runway, leaving me disorientated for a few seconds whilst I worked out what was happening.

The modern airport had lots of e-gates so we were able to speed through immigration and then take a C6 bus from outside the departure hall into the city centre. Buses run every 20 minutes but we must have just missed one as we had to wait around that length of time for the next service to appear.  Adult single tickets cost €3.85 (£3.20) and can be purchased on board and paid for using contactless cards.  The bus had ample luggage storage facilities and the journey was quick, taking us along the resort’s seafront where we alighted at the marina.

As it was too early to check into our hotel we wandered through the town and soon came across a pleasant bar for a late breakfast.  We ordered the brunch offer and our bacon, eggs and chips served with toasted baguette and jam was very tasty if not the most healthy of options.

To walk off our breakfast, we strolled along the palm tree lined esplanade with its marble, wavy patterned pavement and enjoyed the warm sunshine.  We were actually feeling a little too hot in our coats and with carrying our heavy bags around but I wasn’t complaining as it was preferable to the icy weather we’d left behind. Passing the beach, you would not have thought it was winter with the number of people sunbathing and taking dips in the sparkling clear blue Mediterranean Sea.

Although check-in wasn’t supposed to be until 2.00 p.m. at the TRYP Ciudad Alicante our room was ready when we called in an hour early which was good news.  Accessed by the tiniest lift possible which was a squeeze for the two of us with our bags, we made our way to our 4th floor room.  This was well equipped (just missing a kettle) with a newly installed bathroom which was nearly as big as the room itself.  The hotel sits one road back from the seafront and our room had what one might call ‘sea glimpses’ as there was a gap between two buildings to one side of our window through which the promenade was just about visible.

After quickly unpacking we set off exploring, happily leaving our bags and coats behind.  Our first stop was along the seafront for a walk by the marina where we admired some of the many yachts moored there.  The path continued around the back of the marina, parallel with the sea and took us to the Volvo Ocean Race Museum with a yacht outside its entrance which took part in the 2006/7 race.

The museum offers free admittance and documents the history of the race from the first event in 1973 onwards.  We learnt that the race which is the longest and toughest nautical event is held every three years.  The museum is based in Alicante as its marina has been a port of departure four times, the last one being as recent as October 2017.

The museum offers a fascinating tour of the event detailing clothes, equipment and technical data.  There are hands-on exhibits, games and even a simulator called ‘The Ride’.  We queued awhile to experience the simulator but as it was popular we would probably have had to wait quite a long time so decided not to bother.

Leaving the museum, we followed an elevated walkway towards the Playa de Albufereta beach and part way along there we sat on a bench to take in the views, rest awhile and enjoy a few rays of the Spanish afternoon sun.  It was so nice just sitting there without our coats on in winter.

Across the promenade from the marina stands the Plaza de Ayuntamiento, dominated by the beautiful baroque Alicante City Hall.  Heading inland we came across more palm tree lined avenues with stylish shops and cafes.  We spotted a branch of El Corte Inglés, the Spanish equivalent of John Lewis, so we spent some time browsing its numerous departments, especially liking its gourmet food hall.  Alicante has some beautiful architecture and even in winter, its flowerbeds looked attractive planted out with red cyclamen and poinsettia.

On our way back to the hotel, we popped into a seafront cafe for tea and cakes then went back to our room for a rest as the early start to the day had caught up on us.  After a couple of hours rest we felt refreshed and a little hungry so we set off in search of a typical Spanish restaurant for dinner.  We didn’t have to look far, as just behind the hotel we came across a small restaurant called La Crispeta which looked to have a cosy atmosphere with its candlelit tables.  Menus were printed on folding wooden boards and our chosen dishes of rack of lamb and grilled chicken breast were freshly prepared and arrived beautifully presented.  The staff were attentive and friendly making us feel very welcome and we enjoyed our meal.

It was about 9.00 p.m. when we left the restaurant and the streets were still crowded with locals enjoying a late evening stroll so we joined them and wandered around awhile ourselves before returning to our hotel for the night.