Pulling back the curtains we witnessed the most beautiful sunrise over the bay and it made me so happy to be spending time in wonderful Gibraltar.  Breakfast at The Rock Hotel takes place in the Terrace Restaurant where we tucked into a large buffet selection of fresh fruit, cold meats, cheese, bread and pastries.  Eggs are cooked to order in any way you wish and my poached eggs on toast arrived promptly and were just as I like them.  Attentive waiters were on hand to refill our coffee cups setting us up nicely for the day ahead.

We didn’t have very far to go to reach our first activity as it was just across the road in the Alameda Botanic Gardens.  The gardens are free to visit and cover an area of 15 acres.  They were established in 1816 when the British Governor General commissioned a park for the soldiers stationed in the territory to enjoy relaxing in whilst off duty.

Nestled in one corner of the gardens is the Alameda Wildlife Conservation Park.  It’s mission is to care for exotic animals confiscated by Gibraltar customs and unwanted exotic pets.  The park also receives animals on loan from international zoos to raise awareness of endangered species through conservation.  Entrance to the wildlife park is a nominal £5 and a small selection of souvenirs can also be purchased at the kiosk to help fund the project.

We had the pleasure of meeting Jessica Leaper, the Wildlife Park Manager who showed us around explaining how the animals had come to be there.  Jess is very passionate and during the last 12 years has introduced many new initiatives to the zoo.  Set amongst lush vegetation, we wandered along narrow winding pathways observing some very chatty parrots, inquisitive otters running around, bats hanging upside down, snakes, tortoises, lemurs and numerous other species.

My favourite, surprisingly were the pot bellied pigs one of whom was having oil rubbed into his back to help relieve a skin condition.  I also fell in love with an adorable rabbit called Billy who had the most appealing eyes.  If I wasn’t away from home so much I’d just love one like him.

After leaving the wildlife park we spent some time strolling around the botanical gardens.  For such a small territory Gibraltar isn’t short of green spaces and in this oasis of calm we spotted locals participating in tai-chi beside the lake with its koi carp and exotic water lilies.

Winter temperatures are significantly warmer here than home but reminding us of its Britishness, there is even a traditional red telephone box.  An open-air theatre completes the picture, seating almost 450 and home to a host of concerts, shows and weddings.  With the proximity of the gardens to our hotel, hopefully we’ll find time to pop in again during our stay.

A short downhill walk followed to stroll through the old city walls at South Bastion, one of the three 16th century fortification Southport Gates.  This brought us out onto Main Street, the main artery through the city stretching for almost 1 km all the way to Grand Casemates Square.

Not far from the city gates stands The Convent, the official residence of the Governor of Gibraltar since 1728.  The building takes its name as it was originally a convent of Franciscan friars.  Between 1903-1943 it was known as Government House until King George VI reinstated the name convent during the Second World War.

Facing The Convent is the Convent Guard House at Number 6 Convent Place.  It’s Gibraltar’s answer to London’s 10 Downing Street and the headquarters of Her Majesty’s Government of Gibraltar and is where the Chief Minister’s Office is located.

Main Street is a shopper’s delight with its VAT free prices and mix of British high street names including the likes of Marks & Spencer & Debenhams rubbing shoulders with local stores such as the upscale Trends department store.  Also to be be found are a mix of small independents, Spanish retailers, Moroccan greengrocers along with numerous bars and cafes.  Above the shopfronts, Gibraltar’s rich heritage can be seen with decorative Portuguese tiles, Genoese shutters and elegant British wrought iron balconies.

Running parallel with Main Street is Irish Town, it’s not a town but just a narrow lane with a good selection of bars and cafes.  We popped into Sacarello’s, a coffee shop/ coffee roasting business in a former merchants house on the corner of Tuckey’s Lane, which has traded there since 1906.  The cafe is arranged over two floors and exudes old world charm.  We settled down at a cosy corner table to sip our delicious cappuccinos, rest our feet, and soak up the convivial atmosphere for awhile.

A highlight of a visit to Gibraltar is undoubtedly to take a ride on the cable car to the top of the Rock and with clear blue skies, the weather couldn’t have been better for our trip.  The bottom cable car station is located near the southern end of Main Street close to the Botanical Gardens so we headed there next.

Round trip cable car tickets cost £17 for the 6 minute journey, taking passengers 412m to the top of the Rock.  For those feeling energetic it might be a good idea to just ride the cable car to the top and then walk back down by following one of the signposted trails through the reserve.

The views from the cable car are breathtaking and on reaching the top station we were greeted with a troop of Barbary monkeys.  Having taken part in the Monkey Talk experience the previous day, we put our knowledge into practice and by keeping calm and standing our ground the apes merely gave us a passing glance and then continued with whatever they were doing.

If the views had been stunning on the upward journey, then they were even more spectacular from the top station terrace.  We gazed down in wonderment over the town below, and standing on the edge of two continents were in almost touching distance of both Spain and Morocco.

Our table reservation was at the Mons Calpe Suite perched on the summit of the Rock and boasting the best views in town from its 360 degree restaurant windows.  Mons Calpe means ‘hollow mountain’ as the Rock contains a warren of tunnels hewn out over time to defend the historic fortress.

The restaurant menu offers a wide selection from lobster to the more humble fish and chips and our selected mains of Prawn and Mushroom Risotto and Iberico Secreto (a tender slice of ham served on a bed of leeks and potato) tasted delicious.

The ambience and setting of this iconic restaurant coupled with delicious food and friendly service creates a thoroughly memorable experience.  With views to die for and being able to watch the Barbary macaques through the floor to ceiling windows, I’ve had no difficulty rating it as my favourite sky high restaurant ever!

Before taking the cable car back down we spent time exploring the area around the top station.  If you wish to combine a cable car ride with a visit to the Upper Rock Nature Reserve its necessary to pay an entrance fee of £13.

The views were equally good on our way down and with few passengers on board the cable car we had photo opportunities aplenty.  After such a wonderful experience we wandered back up the hill to our lovely hotel taking no more than 15 minutes from the lower station.  Here we enjoyed more sublime views looking out to sea from our balcony.  The end of another splendid day exploring Gibraltar. 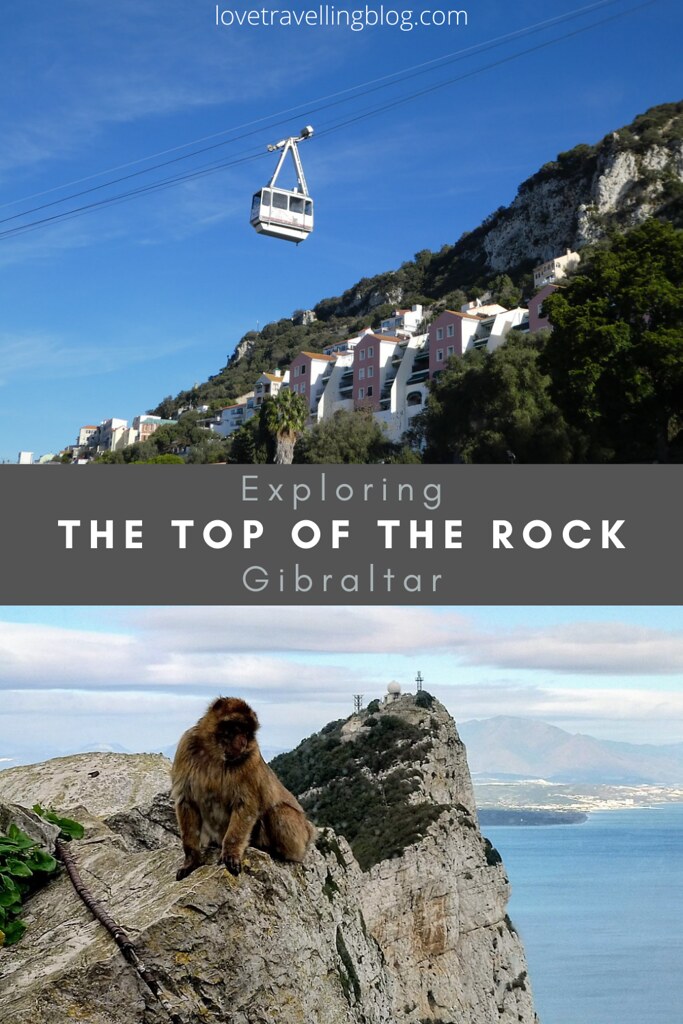