After sleeping soundly in our lovely room at the Hotel Indigo Bath we popped downstairs to start the day by tucking into a delicious buffet breakfast in the attractive Elder restaurant.

Ready to go after a couple of cappuccinos we ventured south east of the town to visit the American Museum and Gardens (standard adult admission £14.50, gardens only £9.00).  The museum has ample free parking and is located two miles from the city centre, close to the main campus of the University of Bath.  Visitors using public transport can take either Bus U1 or U2 to the university from where it is approximately a 15 minute walk to the museum.

This is the only museum of Americans outside of the United States and was founded to bring U.S. history and culture to Britain in order to demonstrate the achievements of Americans in the decorative arts.  As the founders owned a summerhouse in the Bath area they decided to purchase Claverton Manor when it came on the market in 1958 and to transform it into a museum which was then opened three years later.

Most tours of the house are self-guided with volunteers on hand to answer questions in many of the rooms.  However, on the Saturday morning of our visit one hour guided tours were taking place so we joined the 11.00 a.m. one led by an American lady who was very informative and kept our group of all ages entertained throughout.

We toured a series of 18 period rooms designed to document the development of American Decorative Arts from 1680 to the 1860’s.  The rooms contain folk and Native American art, an extensive collection of more than 200 quilts which one member of our tour group had travelled a considerable distance especially to see, furniture and old maps.

In addition to the period room settings we viewed the American heritage exhibition in the basement which recounts the story of the founding fathers, the history of native Americans and of the American Civil War.

Outdoors, the extensive grounds which extend to 120 acres of which 40 acres are open to the public feature gardens containing a collection of North American trees and shrubs.  Of interest also is a recreation of the garden at Mount Vernon, the Virginia home of George Washington.  On site also is an attractive cafe and a dinosaur exhibition which is popular with young families.  I really enjoyed our visit there and would recommend adding the American Museum and Gardens to your Bath itineraries.

We then returned into Bath so that we could visit The Holburne Museum just a ten minute walk from the city centre.  Some readers might recognise this building as several scenes from the Netflix drama Bridgerton were filmed there as it was portrayed as the exterior of Lady Danbury’s townhouse.

Although the period drama is set in Regency-era London, numerous locations in Bath were used as the city has conserved its historic appearance and been awarded UNESCO World Heritage Status for its history and architecture.

The museum was originally built as the Sydney Hotel and has since been a private house.  It is now home to an art gallery of fine and decorative arts built around the collection of Sir William Holburne (Standard admission £11).  We viewed the permanent exhibitions, one of which was a Dutch gallery displaying some masterpieces from the Golden Age.  Also of interest was a temporary exhibition featuring pencil drawings by David Hockney but as photography was not permitted I am unable to showcase this gallery.

We then left the Holburne by its rear exit which leads out into Sydney Gardens, formerly the pleasure gardens of the Sydney Hotel.  Strolling through the gardens was very pleasant and I can imagine how popular it must have been in Regency times to take an afternoon promenade there.  The park contains ornamental temples and leads to bridges over the canal and railway line.

From the gardens we followed the main path and just after the railway we went through a wrought iron gate onto the towpath of the Kennet and Avon canal.  We then followed the canal to its junction with the River Avon so that we could take a look at Bath Locks.  This series of six locks raise and lower boats 65 feet between the Kennet and Avon canal and the River Avon with one of them being the second deepest in the country.

It was lovely to stroll along this stretch of canal and being so close to Pulteney Bridge and the station, it is easily accessible.  We crossed the iron Halfpenny Bridge which was erected in 1878 to replace an earlier wooden bridge that collapsed when too many people tried to cross it at the same time.  The bridge takes its name from its original toll fee of half a penny.

Our final destination of the day was to Bath Abbey which is free to visit with donations towards its upkeep being welcome.  The Abbey has exquisite stained glass windows and a splendid fan vaulted ceiling.  Music filled the air as a choir practice was taking place for the Evensong service that was due to begin shortly.

We had arranged to take the final Tower Tour of the day at 5.00 p.m. (£10 for a one hour tour).  There are 212 steps to the top of the abbey tower but these are broken down into manageable chunks with a pause part way up to look in the bell ringing room and to hear a short history of the abbey’s bells.

Leaving there, we were taken into a tiny room hardly bigger than a cupboard, where we actually sat behind the clock face for a few minutes and learnt about its workings.  After climbing a few more steps we then inspected the bells themselves and watched as one of them struck the half hour.

On reaching the Abbey roof we had splendid views over the city and then had ten minutes to admire the views and take some photos.  I always enjoy behind the scenes church tours as they are so interesting and an opportunity to discover how these wonderful buildings were constructed and of course to admire the views.

At the end of the tour we collected our bags from a locked room as it was preferable to leave them there safe and secure rather than carry them up and down all the winding stairs.

After all this exertion we returned to the lovely Hotel Indigo Bath for a rest and to enjoy a soak in our roll top bath. 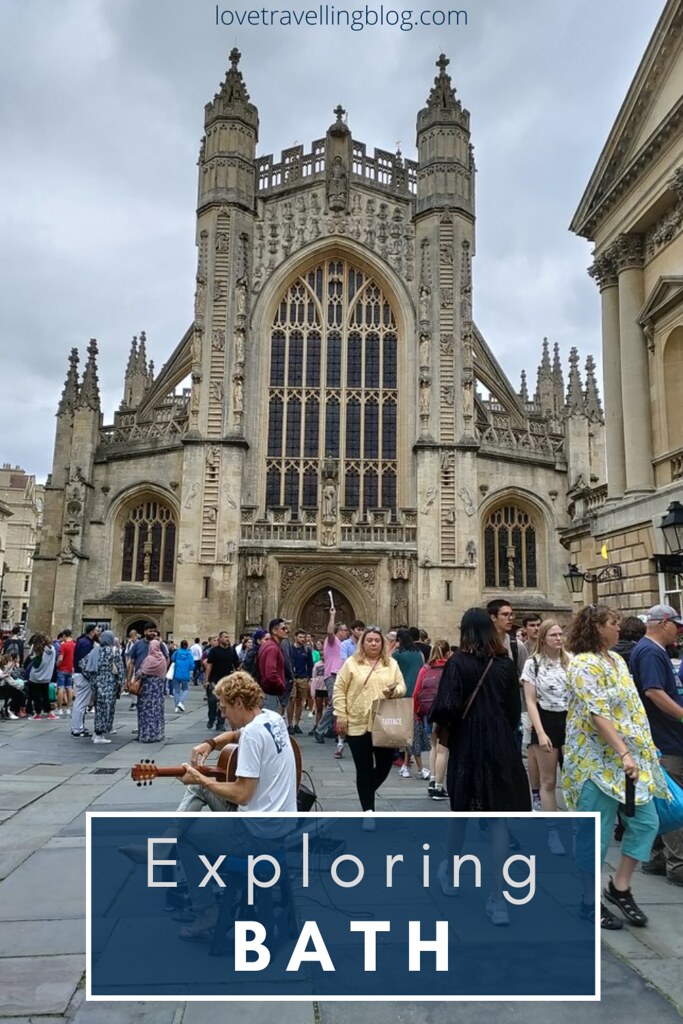