It was a bright, sunny morning just perfect for our planned trip to the neighbouring towns of Oliwa, Sopot and Gdynia.  As they are located close together it’s very easy to combine a visit to all three by taking the SKM train from Gdansk Glowny station.  Our Gdansk Cards included the use of transport in the wider Gdansk area so we did not need to buy an additional ticket.

All three towns are on the same rail line so we decided to visit the nearest one first which was Oliwa, a prosperous neighbourhood located 5 km from Gdansk.  On leaving the station we walked along the main road to Oliwa Park which took us around 10 minutes.  This park is one of the city’s most beautiful with its many shady winding paths, ponds, sculptures and a waterfall.  The park was founded in the 15th century by the Cistercians as a monastery garden for growing their vegetables and herbs.

The main path through the park stretches from the entrance to the rococo Abbots Palace which formed part of the Cistercian monastery and is now home to the Museum of Modern Art.  Entrance to this museum is included in the Gdansk Card but as we were visiting on a Monday it was closed.  Surrounding the palace is a French inspired garden with flowerbeds surrounded by neatly trimmed low hedges.

The path continues a short distance to Oliwa Cathedral which dates back to the 12th century.  There is no charge to visit the cathedral, the interior of which is really beautiful with its vaulted ceilings, canopied high altar and flags hanging from the walls.  The cathedral organ is also of note as it was one of the largest of its type in Europe when constructed with an incredible 7,896 pipes and registers.

On leaving the cathedral we strolled back through the park along a different path where we spotted a red squirrel and then came across a Japanese Garden which had more recently been landscaped with azaleas, a pagoda and a tori gate.  The entire park is a lovely place to visit and it only takes a short time to get there from the city centre.

We then hopped back onto the train to visit the seaside town of Sopot, a little further down the line.  As soon as we had exited the station we knew straightaway that we were going to enjoy spending time there as we strolled along the road with its beautiful architecture and tree lined avenues.  The town’s origins as a spa town grew up around its mineral springs with elegant hotels built for the many visitors wishing to come for the beneficial effects of the water.

We wandered down Monte Cassino which starts at the neo-gothic church of St. George and leads to the sea.  This leafy, pedestrianised thoroughfare is lined with many high class shops and lots of inviting cafes.

For our morning coffee stop it was hard to choose but we eventually settled on the pretty Santa Cafe tucked away in a small square off the main street.  It’s only small but such a lovely place with its antique furnishings and drinks served in fine china teacups.

We could have lingered in the cafe longer but there was still much we wanted to see so we continued down the hill until we reached Spa Square with its art-nouveau buildings.

No trip to the seaside is complete without a stroll on the pier and with the sun shining we couldn’t have wished for a better day to breathe in the fresh sea air.  Sopot pier is notable for being both the oldest and longest wooden pier in Europe.  It extends over 500 yards, almost half a kilometre, out into the Gulf of Gdansk.  Entrance to the pier is 9zl (£1.65) with tickets sold at an office to the left hand side (free in winter).

The pier’s original function was to serve as a boat harbour but in latter years it has been transformed into an attractive leisure facility.  More recently lower and side decks have been added from where we admired the many yachts moored alongside the pier.  Unusual for a pier a further section has been added at the sea end at right angles to the main structure.  This area contains additional moorings and seemed popular with sunbathers as the sea wall behind provided shelter from the wind.

At the far end of the pier we climbed up some steps to a raised platform from where we had splendid views looking back towards the town and of the sheltered cove and wide, sandy beach stretching along the coast.

Leaving the pier, we then strolled along the beachside path a short distance before retracing our steps to the station.  On the way back we noticed a very strange building, so strange in fact that it has been selected as one of the 50 strangest buildings in the world!

It’s called Krzywy Domek (crazy house) and this fairytale inspired building is home to cafes, shops and a local radio station.  In my opinion, it looked totally out of place in such a beautiful town and its appearance must certainly divide opinion!

It was then back on the train for the final destination of the day which was to Gdynia which along with Sopot and Gdansk forms the tri-city metropolitan area.

It took us around 15 minutes to walk down to the marina from the station.  Unlike Sopot, the port city of Gdynia was developed between the 1920’s and 1930’s and is characterised by its modernist architecture.  This lacks the charm of it’s near neighbour although it’s still a pleasant place to spend a couple of hours.  The port provides regular ferry connections with the Baltic countries and is also the headquarters of the Polish navy.  The marina is approached by Kosciuszki Square, named after Poland’s national hero who led the 1794 uprising against Russia.  This square connects the South Pier where two historic ships are located.  With its many boats, Gdynia is known as Poland’s sailing capital and the city has hosted numerous international races.  Overlooking the square stands an aquarium, cinema and theatre complex with a cafe/restaurant.

We strolled along the quayside admiring the museum ships moored there.  ORP Blyskawica meaning ‘lightning’ is a Grom-class destroyer and the oldest preserved ship of its kind, having been commissioned in 1937.  The ship took part in the Dunkirk evacuation (Operation Dynamo) in 1940 as well as various battles in Europe and the North Atlantic.  She became a museum ship in the 1970’s and forms part of the Polish Naval Museum.  Admission 24zl (£4.49) includes both the ship and the naval museum.  Please note that this is not included in the Gdansk Card.

Berthed alongside her is the Dar Pomorza, a fully rigged sailing ship.  She was launched in Hamburg in 1909 and was the first Polish ship to sail around the world flying the Polish flag.  The boat was used for Tall Ships races in the 1970’s and since 1983 has become a museum ship in Gdynia.  Admission to the boat is 20zl (£3.68) and included in the Gdansk Card.  We would have enjoyed climbing aboard this boat to have a look around but as it was a Monday it was sadly closed.

Before returning to the station we found our way to the Kamienna Góra Gdynia funicular which we were led to believe was operating.  However, when we got to the bottom station at Plac Grunwaldzki we discovered it was closed despite the opening times on the door stating it should have been open.  The funicular is free of charge and takes passengers up and down a 115 m track in a single carriage holding 12 people.  It was a little disappointing that we couldn’t ride up to the viewpoint as planned.  We did consider walking but as we’d already covered quite a distance we decided not to.  Instead, we returned to Gdansk on the SKM train taking 25 minutes.

Back at the hotel we enjoyed a short rest and then later went for a wander around the scenic old town finding a cosy Georgian restaurant for dinner.  There we tucked into generously sized portions of wholesome food and drank glasses of the local Tyskie beer.  It was the end of another lovely day exploring Gdańsk and the surrounding area. 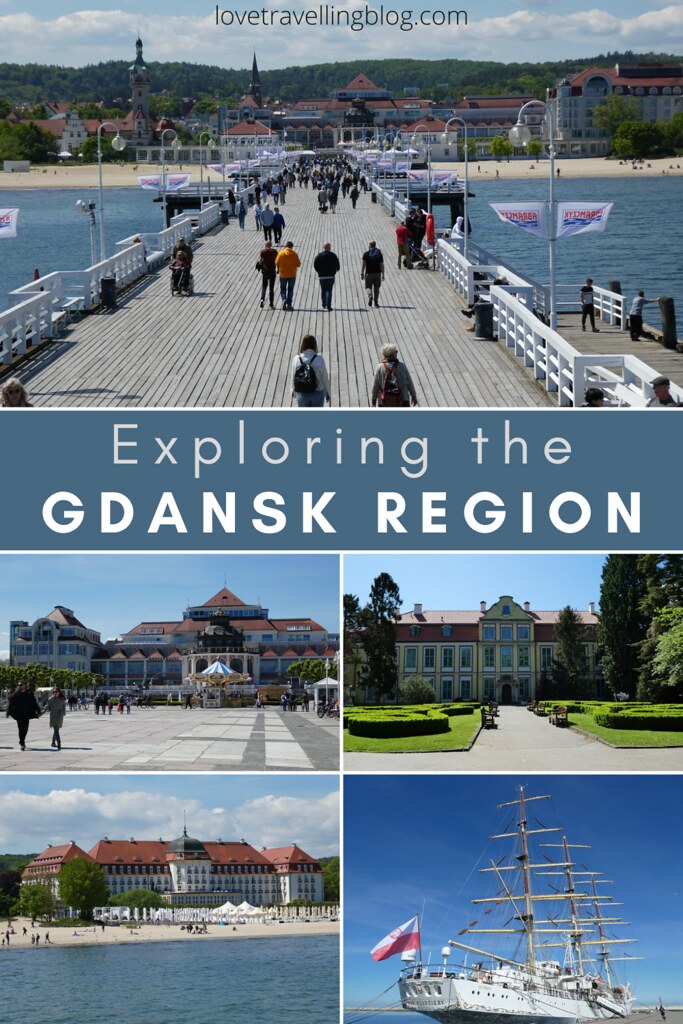