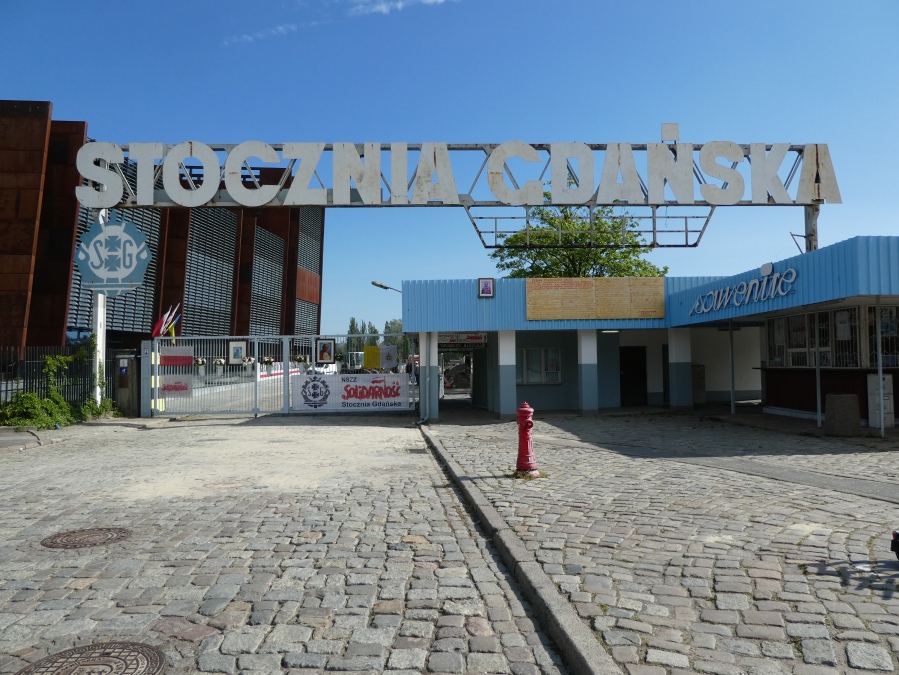 We started off the final day of our weekend in Gdansk with a short tram ride to the European Solidarity Centre which was constructed alongside the historic shipyards.  It is free to enter the building but tickets are required for the permanent exhibition 30zl (£5.55).

The exhibition begins with the widespread strikes of August 1980 following more than ten years of unrest.  It details the birth of the Solidarity movement and the emergence of Lech Walęsa as their leader.  Also covered is the Polish born Pope John Paul’s visit to his homeland the effects of which led to freedom not only for Poland but for all the occupied countries of the communist bloc.

The building has a large atrium filled with trees and plants, feeling light and airy.  There’s also a large reference library, conference facilities, cafe and gift shop.  We took the lift up to the rooftop terrace from where there are splendid views overlooking the shipyards and further afield.

Outdoors in Solidarity Square stands the Monument to the Fallen Shipyard workers of 1970.  The memorial was unveiled in 1980 to commemorate the events of 1970 when 45 people died during street riots against the communist regime.

To one side of the monument is Gate 2 of the Gdansk shipyard.  This famous gate is where Lech Walęsca stood to announce that a deal had been secured with the Communist government in 1980.

Leaving there we hopped back onto a tram back to the old town so that we could visit the Museum of Amber.  Standard admission 12zl (£4.08) Included in the Gdansk Card.  The museum moved into new premises in 2021 and arranged over two floors there are dazzling displays of the stone illuminated against black walls providing a striking contrast.

The exhibition begins by taking visitors back millions of years to when fossil resins and Baltic amber began to form.  The Baltic Sea is unique for its wealth of amber deposits with small nuggets of this semi-precious stone found around the coast.

The museum goes on to describe how amber is extracted, what its properties are and the ways it has been used across the ages.  On display are natural lumps of stone as well as finished products such as jewellery, utensils, sculptures and ornaments.  I knew very little about amber before visiting but enjoyed learning about this semi-precious stone in this well designed and informative museum.

Leaving there, our next stop was to the National Museum of Gdansk standard entrance 10zl (£1.86).  The museum is located in a former Franciscan monastery and is a joy to visit to admire the inside of the building with its vaulted ceilings and large, sweeping staircases.  The galleries contain paintings and sketches by European masters from the end of the 15th to the beginning of the 19th century.

On display is the Last Judgement by Hans Memling which was created between 1461-1471 and is one of the most valuable pieces of work owned by the museum after it was returned to Gdansk by Russia in 1956.

Close to the museum lies the Gdansk Market Hall, constructed in 1896 in neo-Gothic style this red brick and wrought iron masterpiece could easily be mistaken for a grand railway station.  Going indoors we found it to offer the usual range of market items from clothes and footwear through to household items.  Outside we discovered more stallholders selling fresh fruit,  vegetables and tasty snacks.

Our walk then continued to the magnificent Green Gate that forms the link between the old town and Granary Island.  We had walked through these archways numerous times over the weekend but not yet been inside the building which is home to the Green Gate Photo Museum, entrance  5zl (93p).  The museum forms part of the National Museum we had just visited and displays sketches of old Gdansk within its two rooms.  The sketches were interesting but as none of the signage was in English we had difficulty understanding their significance.  The building was a good place though to enjoy aerial views of both Long Market and the riverside.  I am unable to include any photos as this is not permitted inside the museum.

On leaving there we wandered over to Granary Island to visit the Blue Lamb Granary which is a branch of the Archaeological Museum.  It’s located in one of the former granaries close to the river and is yet another of Gdańsk’s museums located in historic buildings.

We didn’t know quite what to expect but were very impressed with the museum layout, signage and exhibits which include a recreated Hanseatic street from the 14th/15th century.  Wandering along this alleyway we felt as if we had been transported back to medieval times with the sights and sounds of life during those days.  Displays of craft workshops, people’s homes and shops help to bring the museum to life and whilst we were there a primary school group were enjoying the galleries just as much as we were.

This concluded our visit to Gdansk’s museums, many of which we’d had an opportunity to visit during our four day visit.    There was still time for one last stroll through the delightful old town and whilst making our way along Long Market we noticed a Fahrenheit thermometer on display so paused to take a closer look.  We discovered that Daniel Fahrenheit (1786-1736) the physicist and inventor was born on an adjoining street from this recreation of his ‘mercury in the glass’.  He gave his name to the temperature scale and his contribution to science has endured for centuries.  Whilst many nations have since abandoned the Fahrenheit scale in favour of Celsius it is still widely used in the USA and several other countries.

After our gentle stroll we enjoyed dinner at a restaurant on Granary Island before collecting our luggage and heading back to the airport.  For the return journey we decided on a different method opting to take a tram to the central railway station and then a bus from outside which took us straight back to the airport.  This took about the same length of time as the train/tram option that we used on arrival but as the bus service is less frequent I think it’s best to check the timetable to see if it fits with your arrival time before deciding which one to take.

The airport was operating efficiently with our return flight to London Stansted departing on time.  The end of a super weekend in Gdansk, a city that I would highly recommend visiting.

Our visit was supported by Visit Gdansk and as always all views and opinions are entirely my own. 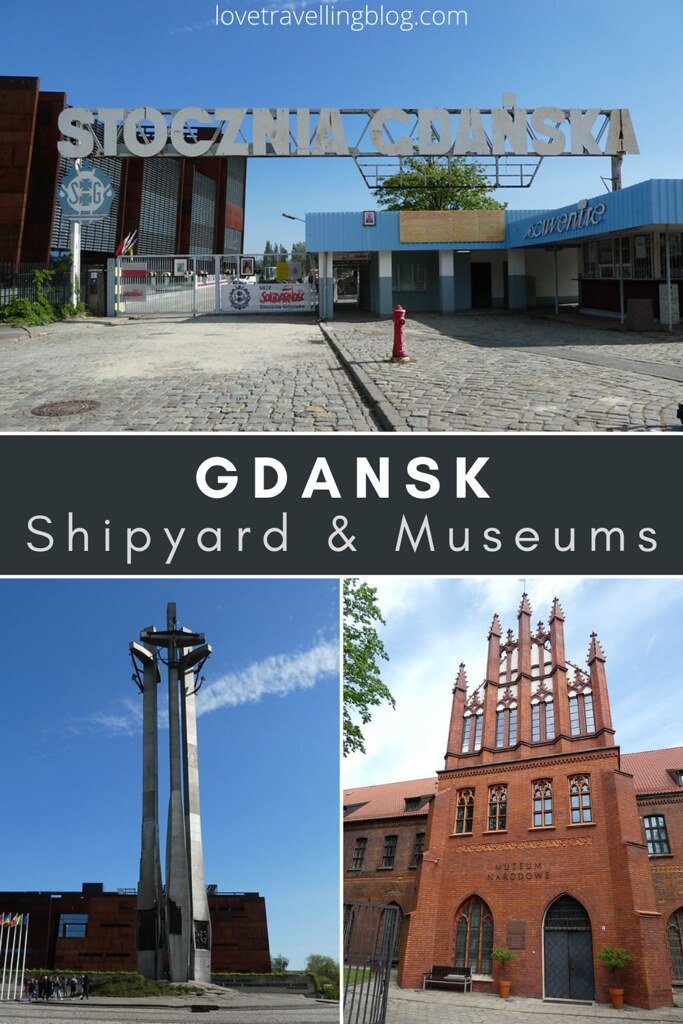