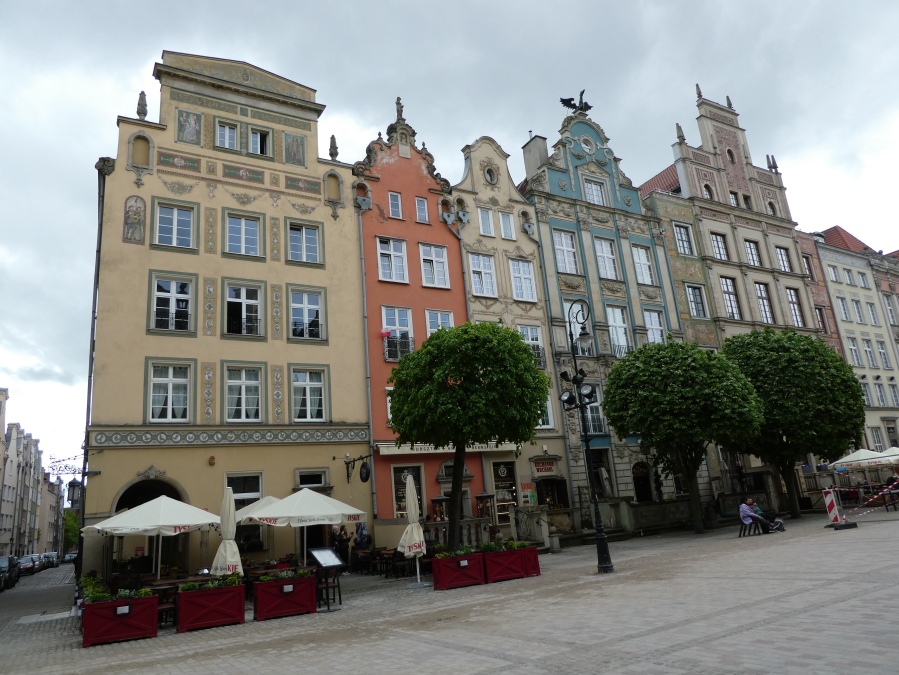 It was another early morning start for our journey to London Stansted airport for our 8.25 a.m. Ryanair flight to the Polish city of Gdansk.  We managed to catch up on some sleep during the flight and it seemed no time at all until we were touching down into Lech Walęsa airport at 11.30 a.m. local time.

There was a lengthy queue to buy tickets on the railway station platform from the one and only working machine resulting in us missing the first available service.  Eventually we were on our way, taking a train to Gdansk Strzyza, an interchange station from where we took Tram 9 onto Granary Island, passing the central railway station.  For our journey we purchased 60 minute tram tickets costing 3.80zl (70p).

We’d reserved accommodation at the Novotel Gdansk Centrum located on Granary Island which was just a few minutes walk from the nearest tram stop.  Although it was only 1.00 p.m. it was pleasing to discover that our room was ready so we quickly unpacked and freshened up before heading out for some lunch.

The hotel benefits from a large garden and by leaving the grounds via that exit we were just steps away from the historic old town making it a very convenient place to stay.  We were both feeling hungry so before embarking on an afternoon of sightseeing we enjoyed lunch at Bar Mleczny nearby.  There, we tucked into bowls of thick beef soup which tasted delicious and was very filling as it was more like a hearty stew.

On leaving the cafe we strolled across the Green Bridge which links Granary Island with the old town.  The bridge was filled with people as it was a Saturday afternoon.  Leaning over the bridge we enjoyed spectacular views of the River Motlawa and of the historic waterfront with its Dutch inspired merchant’s houses lining the riverbank.

We then passed through the magnificent four arched green gatehouse which was originally built as a palace for Polish monarchs despite no Polish kings ever staying in the building.  Just inside the bridge along the charming Long Market lies the tourist office so we called in there to collect our 72 Hour Gdansk Cards.

There’s an option to include public transport covering the entire metropolitan area (Tricity) to the cards and as we planned to travel around we thought this would be useful.  It is worth noting that the transport period of the cards does not need to commence at the same time as the tourist card.  This worked to our benefit as we wished to begin visiting museums straightaway but did not require the use of public transport until the following day.

Wandering slowly along Long Market is an absolute delight with its characteristic merchant’s houses, the façades of which demonstrate the importance of the former Hanseatic city of Gdansk.  The royal route of Kings stretched from the magnificent Green Gate in the east to the Golden Gate at the western end of Long Market, the main thoroughfare of the old town.  During the Middle Ages the city was an important trading port due to its location on the Baltic Sea and many noblemen and merchants chose to settle there.  Second World War bombing devastation caused many of the buildings to be destroyed but these have since been painstakingly re-built mostly on the basis of old documents, photographs and illustrations of the 17th century city.

A short distance from the tourist office stands the beautiful Neptune Fountain which is one of the city’s key landmarks.  It comprises a bronze statue of the Roman sea god which was erected in 1617 and later converted into a fountain.  To protect the fountain during the ravages of the Second World War it was dismantled and hidden away along with many of the city’s other treasures and was only returned to its rightful place in 1954.

The fountain stands in front of Artus Court which now forms part of the Gdansk Museum with entrance included in the Bratislava Card (standard admission 16zl  £2.95).  This restored former merchants’ meeting house was first constructed in the mid 14th century and remains symbolic of the city’s power during the 16th and 17th centuries.  The name Artus Court is derived from the medieval legend of King Arthur and the Knights of the Round Table.

Artus Court is centred around its Great Hall which definitely lives up to its name with its beautiful wooden staircase, detailed woodcarvings, lavish furnishings, statues and tapestries.  Other interesting features include paintings of Old Gdansk, ship models, armour and coats of arms.  The court functioned as a centre for meetings, banquets and other formal events of the city’s most famous people including merchants and politicians.

Leaving there, we visited another of the city’s grand houses Uphagen’s House which forms part of the historical museum.  This reconstructed 18th century home has been restored and is one of only a few merchant town houses in Europe open to the public.  The house was purchased in 1775 by Johann Uphagen who was a merchant, art collector, historian and city councillor who remodelled it to suit the needs of a wealthy merchant.  Since his death ownership passed through several generations of the same family before it became a museum.

From touring this beautiful house with its elegant drawing room, formal dining hall, smaller sitting rooms, kitchen, scullery and courtyard garden we gained an insight into the day-to-day life of a rich burgher in the 18th century.

Next on our list of places to visit nearby was to the Old Toy Gallery which houses a private collection of toys made in Poland between 1920 – 1989.  The museum is tiny but in its small space are hundreds of toys gathered from donations and house clearances.  The taking of photographs is not allowed so I am unable to illustrate the range of dolls, stuffed animals, tin and wooden toys, board games and a cabinet full of pencil sharpeners on display.  It was fascinating to look into the glass cabinets to see the quality and workmanship of these Polish toys and to reflect on the enjoyment of the children who played with them.

Moving on from there we visited the Basilica of St. Mary which is said to be the largest brick church in the world.  This city landmark dominates the skyline and its vast three nave interior can hold up to a staggering 25,000 people.  We admired the high altar which dates from the 1500’s, ornate astronomical clock on the northern transept and several of its 31 side chapels.

Whilst it’s free to enter the church a fee of 17zl (£3.09) is charged to climb to the top of its bell tower.  Naturally we couldn’t resist doing this even though there were 405 steps.  The climb began with a narrow spiral staircase which then crossed over to the main tower where we saw two large bells.  The main tower had a much wider staircase and was easier to ascend.  We paused part way to get our breath back before continuing to the viewing platform from where we could see the Gdansk shipyards, city rooftops and river views from this vantage point despite it being a cloudy afternoon.

After the exertion of climbing up and down all those steps we were ready for a rest so we returned to the hotel for awhile.  A little later we ate dinner at the Trzynastka restaurant close to the hotel on Granary Island.  Shortly after we ordered, a live music session began which was an added bonus as the female vocalist sang both Polish and English songs.  Glancing at the menu I couldn’t resist a plate of  pierogi (Polish dumplings) on my first night back in Poland which I accompanied with a salad and a large glass of Tyskie beer.

To round off our evening we enjoyed a stroll along the riverside promenade which seemed to look even more beautiful illuminated in the night sky. 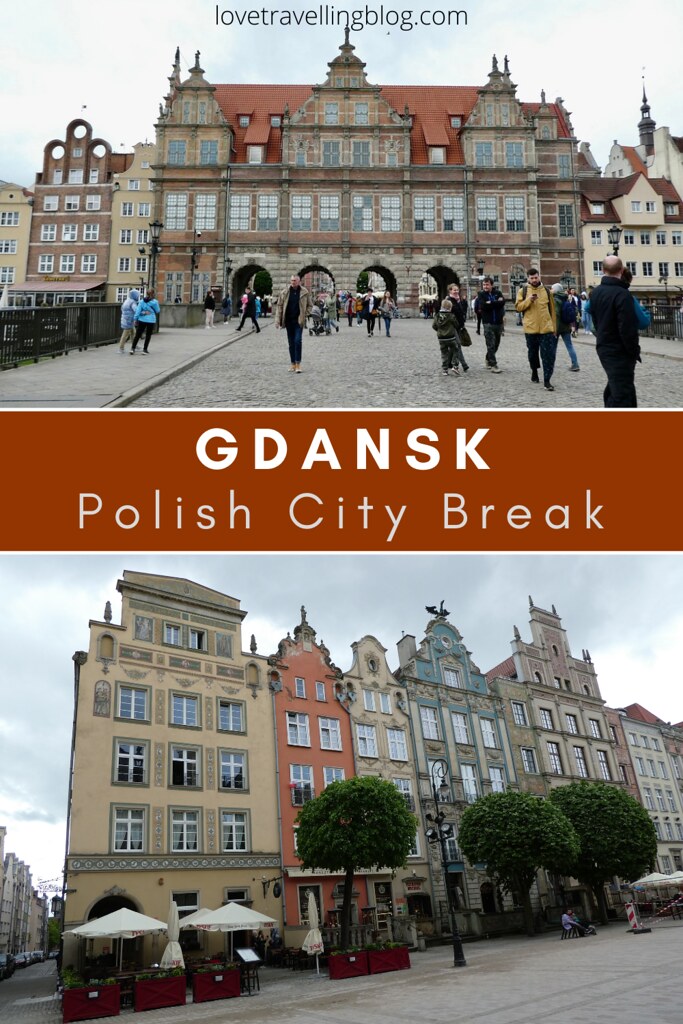