We started the day with a leisurely breakfast at the Holiday Inn Express Derry~Londonderry.  After checking out of the hotel and leaving our bags to collect later in the day we walked across the Peace Bridge as we had only viewed it after dark the previous evening.  Since it’s opening in 2011 the bridge has been held in high regard for both its beauty and as a symbol of peace connecting the two communities across the River Foyle.

Ebrington Square also looked different in daylight as we strolled through the former army parade ground of the barracks.  To the west of the square adjoining the river stands the Mute Meadow, an art installation comprising 40 pairs of columns illuminated at night with a palette of colours depicting the Guildhall windows.

Our morning stroll continued into the adjacent St. Columb’s Park, a natural woodland area bordering the river with various walking trails.  The trees were looking at their best with leaves starting to put on their autumn display of golden shades of yellow and brown.  We followed a path taking us along the riverside from where there are fine city views across the water.

We had timed our walk well as we arrived at the Guildhall just as it was opening at 11.00 a.m. (free admission).  This magnificent building overlooking the River Foyle is fashioned in neo-gothic style and is a stunning local landmark boasting the second largest clock face in the British Isles after London’s Big Ben.

The building was originally named Victoria Hall as, at the time of its construction, it was a custom to name buildings within the British Empire after the current reigning monarch.  The Guildhall takes its current name in honour of its connection to the City of London and its Guilds and has been at the heart of the city since 1887, presiding over Guildhall Square.

On entering the grand hall we viewed the magnificent window alongside tall plaques relating to the history of the building and the city.  The Guildhall contains a vast collection of stunning stained glass windows which were donated by London companies representing local crafts from tailors to fishmongers.  The windows recount the history of the city from its earliest days and are a celebration of the achievements of the City of Derry.

Former mayors and civic dignitaries also donated windows depicting economic developments with other windows featuring the achievements of the three Irish divisions of the British army.

The most recent window commemorates the victims of Bloody Sunday on 30th January 1972 with a trail of poppies symbolising remembrance for the deceased whose names are written on crosses.

The Guildhall is still a working building serving as a meeting place for the elected members of Derry and Strabane District Council and is also home to the Council Chamber and Mayor’s Parlour.  Additionally, it’s a popular venue for weddings and other social events.

After exploring the magnificent building we visited the Plantation of Ulster exhibition on the ground floor.  Through interactive experiences we learnt about the colonisation of Ulster during the reign of King James I in the 17th century and viewed numerous interesting historical artefacts including the Great Parchment Book.

From there, we made our way to the nearby Tower Museum, standard admission £4, open daily 10.00-16.00 to further our knowledge of the city.  This museum appears small from the exterior but is surprisingly large with modern, well laid out galleries depicting the Story of Derry through the Plantation of Londonderry, the Siege of Derry and following the city’s growth.  The interesting galleries take visitors through the 18th and 19th centuries with exhibits exploring the city’s colourful and dramatic history.

Also covered are the dramatic events of the early 20th century including Partition which is presented in a balanced way taking into account all aspects of this difficult period.  A further gallery focuses on the Troubles and its impact on the lives of people living in Derry during this period.  A wide range of artefacts and interactive displays make the museum suitable for all ages with dressing up clothes and brass rubbing to keep young children engaged.

A separate permanent exhibition in the tower itself is entitled An Armada Shipwreck – La Trinidad Valencera which sank off the Donegal coast in 1588 and was rediscovered by divers from the City of Derry Sub-Aqua Club in 1971.  This fascinating display includes numerous interesting relics retrieved from the ship including a cannon, goblets, coins and shoes.

Before leaving the museum we took the lift to the top of the tower as there is an outdoor viewing terrace with panoramic views across the city and riverside.

We were then ready for a coffee so we wandered back across to the Guildhall which has an attractive cafe on its ground floor called Guild.  It appeared to be a popular meeting places for locals and visitors alike with a large outdoor terrace overlooking the riverside.  We relaxed awhile with tea and scones thinking about where to head next.

Feeling refreshed after our lunch break we decided to return to the Bogside area so that we could view the series of 12 murals known as The People’s Gallery along Roseville Street and Lecky Road.  The Bogside area takes its name because the land where the old city was built was originally an island in the River Foyle and when the river diverted to its current course it left behind a marshy wetland.  Below are photos of a selection of the murals. 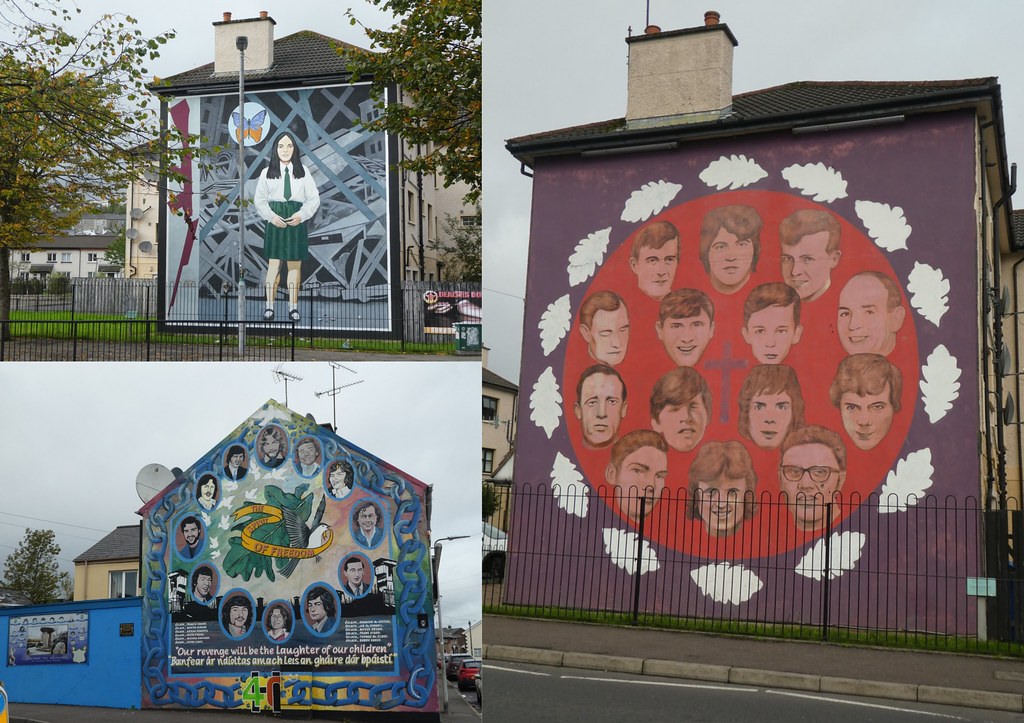 Over our weekend in Derry we had come to realise that the city is compact and easily walkable and with this being the case we had time to fit in a visit to St.Eugene’s Cathedral, the Catholic cathedral of Derry located in an elevated position outside the city walls on Infirmary Street.

Slightly further along Infirmary Street stands Brooke Park so we took a short walk through its gardens.  The park first opened in 1901 and features ornamental flowerbeds, lawns and an attractive small pond overlooked by Gwyn’s Cafe and Pavilion.

There was little in flower but the autumn tints made up for this and we strolled along the tree lined paths before returning to the hotel to collect our bags.  Our weekend in Derry had been wonderful and we had enjoyed every minute of it.  Whatever you prefer to call the city it doesn’t matter because to us and probably everyone else who has been there and experienced the warm welcome, it is best described as LegenDerry!

After taking a taxi back to the airport we collected a hire car from Hertz, piled our bags in the boot and drove the short distance to Limavady in the scenic Roe Valley.  We had arranged to spend the night at The Willows which offers luxury bed and breakfast accommodation in the main house exclusively for adults and self-catering suites in the grounds ideal for families.

We received a warm welcome from Annie, the owner and her gorgeous Yorkshire terrier Mabel.  After sitting down to tea and homemade scones we settled into Aspen, our charming room on the first floor of the main house complete with a large stylish en-suite bathroom.

For guests use there are gas barbecues and a pizza oven which must be a lovely way to spend a relaxing evening outdoors in warmer weather.  With the weather not being at its best, we opted to eat out and had reserved a table for dinner in the Coach House at the nearby Roe Park Resort.

It only took about ten minutes to drive to the large resort which specialises in golf breaks but is open to non-residents for meals.  The Coach House restaurant lies on the upper floor and divided into sections giving it a more intimate feel.  Service was attentive and from the menu with enjoyed melon with a raspberry sorbet and a prawn cocktail with baked cod and roast duck to follow. All the dishes were nicely presented, of a generous size and tasted delicious.

Having tucked into freshly baked scones a little earlier we resisted the temptation of a dessert despite them looking very appetising as they were being served to nearby tables.

Our evening hadn’t ended there because back at The Willows we spent an hour relaxing in the hot tub with glasses of Prosecco.  I’d never experienced a hot tub like it as this Canadian designed tub came equipped with fountains, sprays and colourful lights which we enjoyed experimenting with whilst relaxing our muscles in the warm bubbles, the perfect way to end a memorable day!

A walk around Belfast City Centre 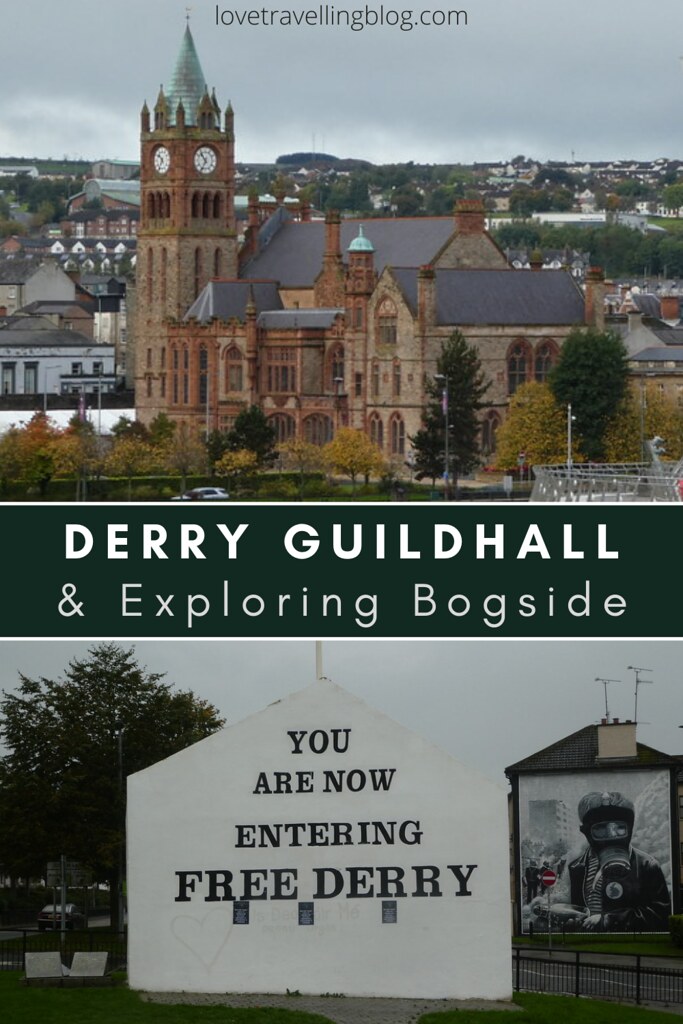