After enjoying breakfast in our aparthotel we walked the short distance to Liverpool Central Station for a Merseyrail train to Waterloo.  As we intended to make another journey later in the day we purchased off-peak day returns at £4.20 each.

The journey heading northwards along the coast took just 17 minutes and from there we turned left out of the station down South Road passing numerous shops, bars and cafes until we reached the promenade.

It was another bright, sunny morning and ideal for a bracing walk along the seafront following a path through Crosby coastal park and the lakeside.  Before going out to sea the path winds its way between two lakes and then across sand dunes.  It didn’t take very long until we had reached the beach and the first of Antony Gormley’s figures had come into view.

Crosby Beach is now the permanent home for his installation, ‘Another Place’ after having previously been displayed in Germany, Norway and Belgium.  The statues were due to be moved to New York back in 2006 but the council agreed they could remain permanently at Crosby as it helped to bring tourists to the area.

Antony Gormley, best known for his Angel of the North statue in Gateshead created this installation in 1997, three years after winning the Turner Prize.  It consists of 400 life size cast-iron figures spread over a 3.2km stretch of Crosby Beach.  Each statue weighs 650 kilos and is a cast replica of the artist’s own body, all of them staring out to the Irish Sea in silent expectation.  As the tides ebb and flow the figures are revealed and submerged by the sea.

As the tide was out we wandered down onto the beach to take a closer look at some of the figures.  As several of the statues are positioned up to 1km out to sea, it is not advisable to go so far out as it is easy to get cut off by the fast incoming tide or to get stuck in the soft sand or mud.

As well as viewing the sculptures it is a very pleasant walk along the promenade and on the Saturday morning of our visit it was popular with both walkers and cyclists.  For the energetic, the promenade also forms part of the Sefton Coastal Path, a 21 mile walking/ cycling route between Crosby and Southport.

To our left we enjoyed far reaching views across the Mersey estuary to the Wirral peninsula whilst to the other side were pleasantly wooded areas with numerous Edwardian villas on the road behind facing the sea.  We turned inland by the coastguard station and continued to Hall Road railway station 450 m from the promenade.  Our leisurely morning walk had taken approx. 75 minutes and was 3.2 miles (5.1 km) in length.  If you prefer to travel by car there is free parking along the seafront and in the local car parks.

After returning to our accommodation for a little rest and some lunch we were ready to set off again and make further use of our rail day ticket.  Back at Liverpool Central Station we caught a train on the same line as earlier but this time heading in a southerly direction to St. Michael’s station as we wished to explore Sefton Park.

The station is located one mile from the park entrance and accessed via Belgrave Road and then by following Lark Lane to its end.  Sefton Park is Liverpool’s main park covering 200 acres taking the form of a natural landscape rather than formal gardens.  I think we had arrived at the best time of year as it looked delightful with cherry trees in full bloom by the lakeside and banks of daffodils still in flower.

There were lots of people out enjoying the fresh air but as it’s so vast it didn’t seem crowded, with ample room for everyone to spread out.  Several bands were playing in different areas, providing entertainment for families enjoying a picnic or just lazing in the spring sunshine.

Positioned next to the main café stands a 7ft statue of Eros, the Greek God of Love.  If you think you might have seen this somewhere else you would be correct as it is a replica of the one in Piccadilly Circus, London.

A second casting was unveiled in 1932 and its designer Sir Alfred Gilbert is thought to have preferred the Liverpool one because it was set on a fountain.

Taking pride of place in the park is the magnificent Palm House, a Victorian glass panelled building erected in 1896 and more recently restored to its former glory.  It contains over 200 plants some of which are extremely rare and now doubles as a popular wedding and event venue.

Another point of interest we came across was the Victorian bandstand which is said to be the inspiration for The Beatles song Sgt. Pepper’s Lonely Hearts Club Band.

On leaving the park we decided to visit another of the city’s parks on our way to the riverside.  It took us around 20 minutes to reach Festival Gardens, a former household refuse site which was transformed into the UK’s first ever International Garden Festival in 1984.  The festival was a concept designed to boost tourism in the city and during its five months a staggering 3.4 million visitors came to visit.

Since then a large part of the gardens were developed to form residential housing whilst the remaining gardens fell into disrepair.  Starting in 2010 the gardens have been transformed with boardwalks and woodland trails.  Both a Japanese and a Chinese pagoda have been restored both originating from the festival and we enjoyed following some of the winding paths that link through to the waterfront.

We had now arrived at the Otterspool Promenade, a level walking and cycling path connecting to Pier Head in the city centre.  We hadn’t walked very far before we came across The Britannia Inn and as luck would have it, we managed to secure a table bathed in sunshine overlooking the river estuary.  After months of pubs being closed, we relished our glasses of lager sitting out on the terrace feeling that life was once again returning to normal.

Refreshed, following our welcome break it then took us just under an hour to walk back to the hotel passing Brunswick Dock, Manners Wharf and Queens Dock on our way.  Soon afterwards we turned inland by the M & S Bank Arena, a venue I had seen ABBA The Musical at back in 2010 when it was known as the Echo Arena.  It had been perfect spring weather and both our short train journeys to Crosby Beach and Sefton Park had provided us with lots of interesting things to see and do.

Later in the evening we couldn’t resist going out again taking a short walk to Pier Head where we saw the city’s landmark buildings and The Beatles statue after dusk. 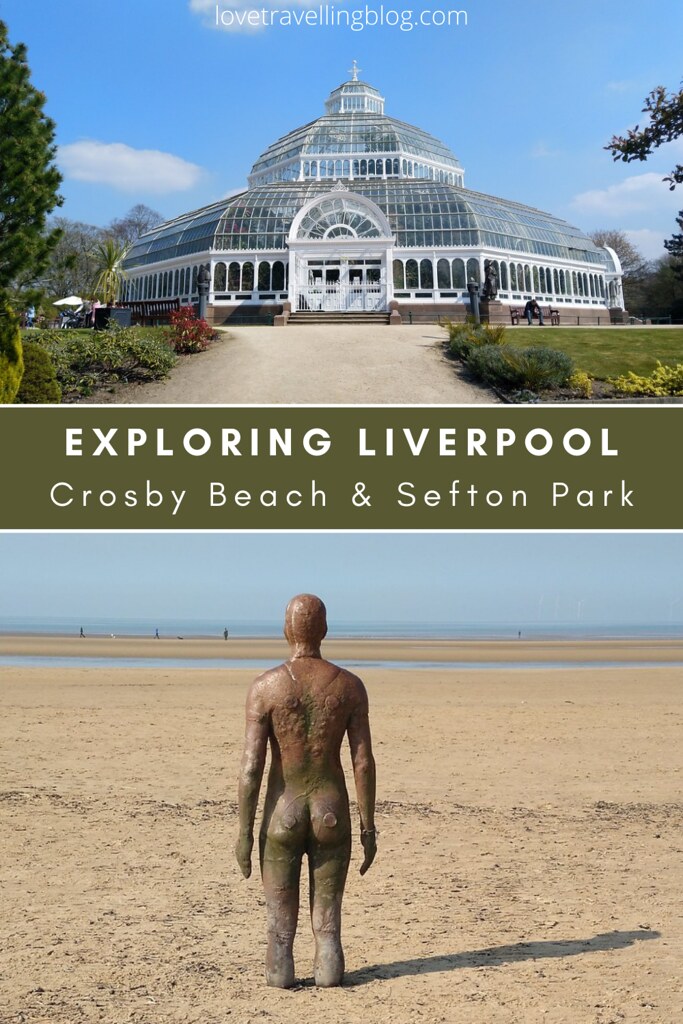