We woke to another bright, sunny morning which was just perfect for our planned walk around many of the city’s major sights.  Our self-guided tour began at the St. George’s Quarter located just across the road from Lime Street station.

This historic district forms part of Liverpool’s World Heritage Site and includes some of the country’s finest architecture with classical style Victorian and Edwardian buildings.  These include the magnificent St. George’s Hall, Liverpool Central Library, World Museum Liverpool and the Walker Art Gallery all centred around St. John’s Gardens.

The terraced gardens form part of the conservation area and contain ornamental flower beds and memorials to notable people in the city.  It’s an oasis of calm yet only minutes away from the the station and the bustling city centre.

With museums unable to open at present we’d come to visit the Central Library which was again welcoming visitors through its doors.  I’m a huge fan of libraries and regular readers will know that I try to seek them out wherever I travel and this one had been on my wish list for quite awhile.

The Library is a unique blend of historic and modern architecture as the building dates back to 1860 combining original features with a modern entrance hall incorporating a glass dome with criss-crossing staircases up to the ceiling.  The dome was designed to mirror the library’s Picton Reading Room and features a balcony with spectacular city views although this wasn’t accessible during the time of our visit.

After taking the escalator to the first floor we followed signs into the Picton Reading Room which first opened in 1879 and is named after Sir James Picton, Chairman of the Library Board at that time.

The reading room has a distinctive semi-circular frontage with Corinthian columns and was the first library in the country to have electric lighting, a much safer option than gas lights given its large number of books.  Sixteen Liver Birds, the emblem of Liverpool can be seen carved around the ornate stonework on the exterior of the building.

Its magnificent circular interior is stunning with balconies accessed by narrow, wrought iron spiral staircases, it’s oak bookcases and central dome.  The gold ring which can be seen just above the top level of bookshelves is actually a cleverly disguised ventilation system designed to keep the room cool.

Located in the next room is the Hornby Library named after Hugh Hornby who donated £10,000 for its creation together with his vast collection of rare books, letters and etchings.  The exquisite room is fashioned from Bath stone in a classical style.

Adjacent to the Hornby Library is the Oak Room named after the golden wood of its floor and bookcases.  It is home to one of the country’s rarest books entitled ‘Birds of America’ which is kept safely in a climate controlled glass cabinet as it is valued at several million pounds.

It really had been a delight to visit the Central Library and I would recommend adding it to your own itineraries.  From the library it was then a 20 minute walk to the University of Liverpool. The university is a member of the prestigious Russell Group and is one of the oldest in the country.  We’d come to take a look at the Jubilee Quadrangle, a focal point of the city’s Knowledge Quarter.

The quad has an oval shape taking inspiration from the form of spun sugar in respect of Henry Tate, the sugar magnate who donated a large amount of money to the university.  It was designed in celebration of the Queen’s Diamond Jubilee and is surrounded by several of the university’s grand buildings including the Harrison Hughes School of Engineering.

The use of pleached trees create a contemporary style forming a stunning elevated screen around the quad.  This style of planting was very popular in the 17th and 18th centuries particularly in France and Italy where the trees could be seen lining the gardens of stately homes and it is now becoming popular once again and looked stylish in the square.

Strolling through the university campus we came across the Victoria Gallery and Museum housed in another impressive Victorian building.  The museum wasn’t open but it will be interesting to return when it is to view the fascinating collection of objects covering the long history of the university.

Moving on, our next destination was just steps away bordering on the edge of the campus.  The Metropolitan Cathedral of Christ the King is Britain’s largest Catholic cathedral, perched on a hill high above the city.

Its controversial styling definitely splits opinion of both affection and consternation but whether you view it as a modern masterpiece or not, it’s certainly one of Liverpool’s most recognisable buildings.

Leaving the Cathedral, it was then a fifteen minute walk across to the Georgian Quarter with its cobbled streets, Georgian townhouses and pubs.  The city boasts some of the largest collections of Georgian architecture outside of London taking in the streets of Rodney, Catherine and Falkner.  Reflecting the city’s rich history, these houses display a wealth of decorative features from wrought iron railings and balconies to ornate doorways and fanlights.

The National Trust have preserved Hardman’s House at 59 Rodney Street for the nation where visitors can step back in time to explore this fascinating home and photography studio.  Another place I definitely want to visit, when I can.  The neighbourhood is often used as a backdrop for television period dramas and films.

From the Georgian Quarter our stroll through the city continued to Liverpool Cathedral on St. James Mount.  It’s Britain’s biggest Cathedral and the 5th largest in Europe.  King Edward VII laid the foundation stone in 1904 and by 1910 the first part of the Cathedral was complete.

Fortunately, the building was open and we were able to explore its vast interior and beautiful Great West window.  Not only is the Cathedral the country’s biggest but it also boasts the UK’s largest organ made up of a staggering 10,267 pipes which took three years to build.

In front of the altar steps a photograph of the Duke of Edinburgh had been placed with a Book of Condolence for visitors to sign in recognition of his numerous visits to the city.  After strolling through the grounds it was then a downhill walk to Chinatown, the next place on our list.

Liverpool’s Chinatown starts from the top of Duke Street and continues along Nelson Street and is home to one of the largest and oldest Chinese communities in the country with its collection of supermarkets, bars and restaurants.

The focal point is the traditional Chinese arch which is adorned with more than 200 dragons.  This ornate entrance welcomes visitors to Chinatown and also celebrates Liverpool’s twin city status with Shanghai.

On our way back to the hotel we walked along Bold Street, starting at the top by the Church of St. Luke and following the street all the way down to Concert Square in the heart of the city.

This narrow, pedestrianised street is a vibrant area noted for its small independent shops, cafes and restaurants spilling out into the road.  The area is known as Ropeworks as the street was originally laid out as a Ropewalk, a long, thin area of land used in the manufacture of rope.

The measurement from one end of the street to the other was the standard length needed for sailing ships.  Last summer we came across a Rope Walk by the riverside in Ross-on-Wye, an area that was used to dry ropes that were manufactured nearby.

We were now close to our hotel and after popping into Marks & Spencer located in a grand old building we were ready for some tea and cakes after an enjoyable day touring the city centre on foot.  Liverpool is reasonably compact and it is unlikely that you will require the use of public transport unless you are travelling further afield. 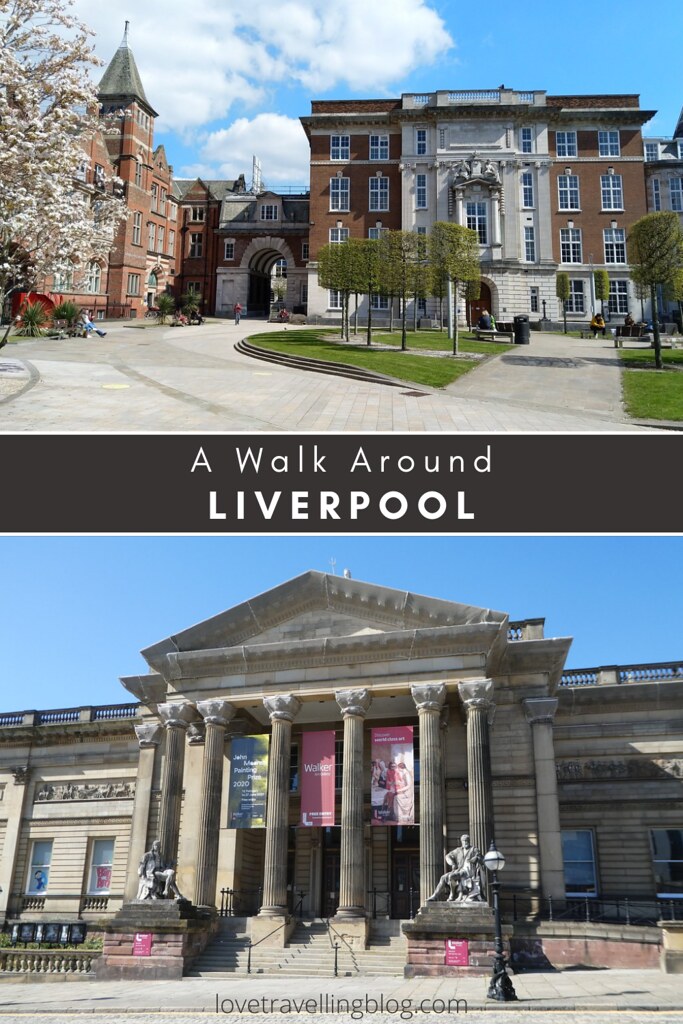 71 thoughts on “Day 2. A walk around Liverpool”