After breakfast in our hotel, it was back to Saō Bento station again with its beautiful blue tiled concourse. Our destination was to be Portugal’s third largest city, Braga, return day tickets €7 each.  The train was reasonably quiet and we enjoyed looking at the passing scenery from the carriage windows during the 75 minute journey which terminated in the city.

In complete contrast with Saō Bento in Porto, the station was quite modern and nondescript but it was good to see that the small old station building had still been retained.  Looking at our phone map we followed its suggested route into the centre, taking around ten minutes.

Located on a hill between the station and the centre are the Campo das Hortas gardens so we spent a few minutes there before continuing into the historic centre through its triumphal archway, the Arco da Porta Nova which has stood there since the mid 18th century.

The archway leads onto Braga’s main thoroughfare, Rua Dom Diogo de Sousa.  The pedestrianised high street is narrow and appealing as it’s lined with medieval buildings and had banners strung out across the road.

Our walk then took us to the Biscainhos Museum which is set in the 17 & 18th century palace.  The museum takes visitors on a journey through the daily life of a noble family living in the palace and includes collections of furnishings and ceramics.  The central staircase features some magnificent azulejos (blue tiling).

The stable block contains numerous carriages and riding equipment of the period and this leads out into the formal sumptuous gardens.  Its terraced lawns and flower beds are considered one of the best remaining examples of Baroque period gardens with their ornamental sculptures and box hedges.

Just around the corner from the Biscainhos Museum are the Gardens of Santa Barbara.  This small, but beautiful garden was ablaze with colour as despite the summer bedding plants starting to fade, the dahlia beds were in full bloom.  These formal gardens, again with manicured box hedges, surround the north walls of the imposing medieval wing of the former Archbishop’s palace.

It was then time for some lunch so we sat out on the pavement terrace of one of the bars in the Praça da Republica which is considered to be the heart of the city.  It was a perfect place to sit and watch the world go by whilst enjoying some lunch with splendid views of the Arcada gardens and its fountain.

It was just as well that we had taken a rest as our next activity involved climbing 640 steps!  No visit to Braga can take place without making a visit to the Baroque staircase of Bom Jesus do Monte.  It’s located 5 km out of town but very easy to get there by public transport.  Bus 2 departs every 20 minutes from various points in the city centre and terminates at the monument.  A single fare is €1.65 and only cash payments are accepted (change given).

In search of the correct bus stop we passed the Raio Palace with its bright blue tiled rococo façade and then conveniently arrived at the stop just as the bus was arriving so we couldn’t have timed it better.

Fifteen minutes later we had reached the foot of the Bom Jesus staircase which is one of Portugal’s finest monuments and a UNESCO World Heritage Site.  The monumental staircase has 170 steps but to reach there, its necessary to climb an additional 470 steps first.

Fortunately, it wasn’t too hot for the climb which has steep slopes and flights of steps leading up to the actual staircase.  The Baroque staircase depicts the ascent to heaven and is adorned with statues and fountains depicting the five senses.  Pausing occasionally to take a rest we turned round and took in the spectacular views across the city and surrounding countryside.

For those less able to walk, the world’s oldest water powered funicular is usually on hand to whisk visitors up to the sanctuary from near the bus stop but it was out of action during our visit.

The sanctuary is a pilgrimage site and has been attracting religious devotees since the 14th century.  The church stands at the top of the staircase and to one side is a viewing terrace and cafe next to the upper funicular station.

Visitors can even climb a little higher as just above the sanctuary are some woodland trails, a boating lake and cafe.  We enjoyed a pleasant stroll by the lakeside before descending the steps back to the bus stop at the bottom, which was much quicker and easier than going up.

Visiting the Bom Jesus staircase is free of charge and with easy public transport access, a definite must visit cultural attraction whilst visiting Braga.

After returning to the city centre we just had time to visit the Cathedral before returning to Porto.  The city’s cathedral has undergone numerous modifications over the years, its internal highlights being the Baroque double organ and its wonderful gilded choir stalls.

It was just as well that our train was terminating in Porto as after such an active day we soon found ourselves nodding off to sleep.

Visiting Cascais and Estoril from Lisbon 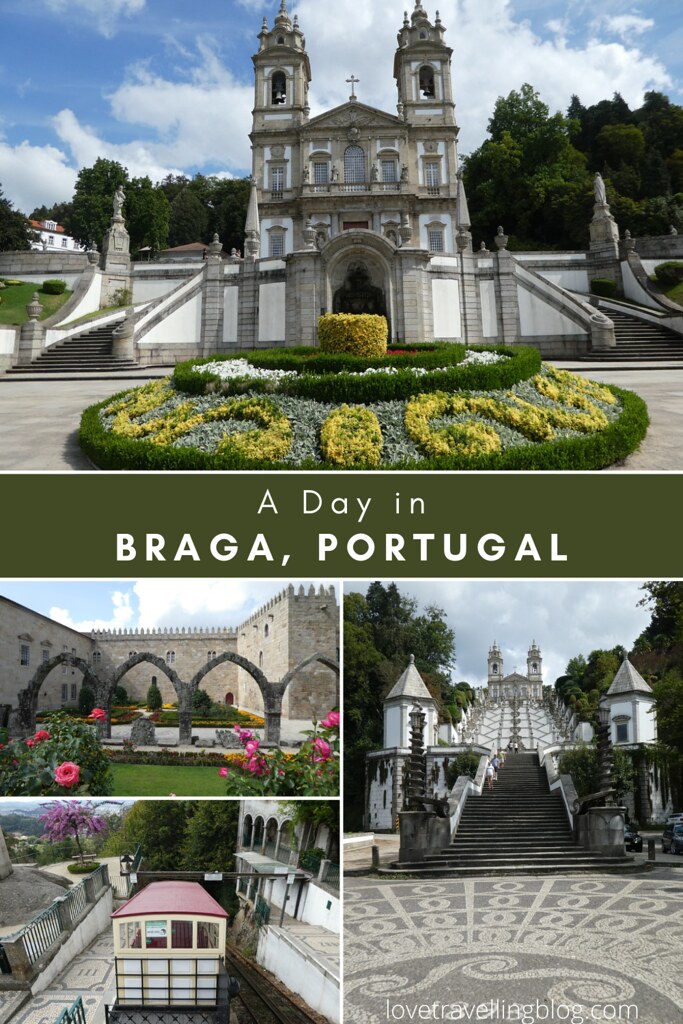