We’d arranged to take a tour of Chester Cathedral but as this wasn’t scheduled to begin until 11.00 a.m. there was time for a short walk after breakfast.  Just along Pepper Street from the Leonardo hotel lies the Roman Gardens which we’d viewed from the city walls but not yet explored.

The gardens were established in 1949 as the city’s contribution to the 1951 Festival of Britain.  They contain a series of Roman artefacts discovered throughout the city, including fragments of stonework and murals.  The columns from the exercise hall of the Roman bathhouse are on display along with a recreation of a hypocaust, an ancient Roman heating system.  Useful information boards explain the significance of the artefacts and it was a tranquil spot for a morning stroll.

It was then just a short walk to Chester Cathedral.  This impressive building is an example of several architectural styles.  It began life as a Benedictine Abbey in 1093 where the monks built a church in the Norman style.

The Norman influence can still be seen today in the north transept, north tower and parts of the cloister.  I always enjoy wandering through a cloister and the one at Chester is beautiful with its leaded glass windows overlooking a lawned inner courtyard.  The cathedral was rebuilt from 1250 onwards in a much more dramatic gothic style.

The choir stalls found in the Quire have intricately carved misericords with all kinds of creatures including hounds, angels, dragons and maidens carefully woven into the woodwork.

Unlike many cathedrals up and down the country, Chester offers free admission although donations towards the upkeep of the building are obviously welcome.  We did though comes across a very interesting fund raising project for the church.  A huge 350,000 piece LEGO recreation of Chester Cathedral has been underway for quite some time and on payment of £1 visitors can add an additional brick to the model.

It was approaching 11.00 a.m. so we made our way back to the visitor desk as we were booked on the Cathedral at Height Tour (£10).  I always enjoy taking ‘behind the scenes’ tours of buildings as from these hidden spaces one can learn more about the history of the place than from just the public areas.

There were 11 people on our tour and we followed our guide through a small oak door leading up a narrow winding stone staircase to the top of the cathedral tower.  There are a total of 216 steps to the top but it was an easy climb as we stopped frequently to examine carvings and to look at how the church was constructed.

We accessed the former bell ringing room via three separate spiral stairways, narrow passageways and along stone balconies.  We were all ready to sit down for a few minutes but my thoughts went to the bell ringers who, after their exertion of climbing the tower had then to pull on the ropes to peal the bells.

Prior to the 1970’s this central tower housed a 29 cwt ring of ten bells with the ringing room positioned directly beneath.  However, with costly remedial work needed it was decided to build a separate bell tower in the grounds.  This was a controversial decision but over time the tower has blended in with the existing building.

After our short rest, we continued out onto the rooftop 125ft high.  The weather was favourable and we spent 10 minutes taking in the views from the summit.  From this lookout point we were able to see across the border into Wales and the city centre below.

We took a slightly different route back down and from one of the stone balconies we had spectacular views of almost the entire church.  The hour long tour had been very interesting with the time passing by quickly as our guide was clearly passionate about the cathedral and of sharing his knowledge with us.

Leaving there, we caught a bus to another of the city’s top attractions, the famous zoo.  Getting there by public transport couldn’t have been easier as both the X1 and No.1 buses run a frequent service to the main entrance of the zoo taking around 15 minutes.  If you are travelling by car then there is ample free parking available onsite.

Chester Zoo (standard admission £29.08) opened by George Mottershead and his family in 1931.  It is one of the country’s largest zoos covering 125 acres and housing over 7,000 animals covering 500 species.  The zoo has its own free smartphone app which includes an interactive map showing your location in the park along with a day planner of activities taking place which we found useful.

It was around 1.15 p.m. when we arrived so we decided to eat lunch first.  The zoo has a variety of cafes, kiosks and street food stalls dotted around but The Oakfield a ten minute walk inside the entrance is something special as it is the historic family home of the Mottershead family.  Over the years it has also served as the zoo’s head office and as a wedding venue.

This unique British pub is an absolute gem with dining in its old library, and drawing room adorned with family heirlooms and animal paintings.  The pub serves a varied menu of high quality dishes using locally sourced produce wherever possible.  Our mains of blade of beef and salmon pavé were very flavoursome and well presented.  We’d been relatively good in not ordering starters but couldn’t resist the yummy desserts.

There were a good selection of beers on offer and with 50 different gins to choose from, I was well catered for too.  Service was friendly and efficient with prices moderate.  Attached to the original building is a bright and airy garden room with additional seating leading out onto the terrace for warmer days.  It’s a great place to spend an hour or two relaxing over a meal in between viewing the animals.

After our delicious lunch we needed to walk off some calories and what better way than by exploring the zoo on foot.  It was a bitterly cold afternoon with a stiff breeze but we were nice and snug with our duvet coats tightly buttoned up.  It was fun wandering around and our highlights included viewing the Asian elephants and learning that Chester was in fact the first zoo to breed elephants in the U.K.

The Butterfly House was beautiful with its large and varied collection of butterflies fluttering around.  I tried numerous times to take a photo of some of them but they always closed their wings or disappeared just as I pressed the shutter.

The penguin enclosure was very popular and it was fun to watch the endangered Humboldt penguins waddling around on the surface and darting around extremely quickly under water.  I was surprised to read that using their flippers they can reach speeds of up to 25 mph.

The zoo is attractively laid out in a landscaped parkland setting with clearly marked paths and slopes that are accessible to all.  We viewed so many animals that I couldn’t possibly include them all here but there’s much to interest the entire family from giraffes and lions to chimpanzees, some of which have lived at the zoo for over 30 years.

This brought our weekend in Chester to a close and what a time we’d had from walking along the city walls, taking a leisurely river boat trip, climbing to the top of the cathedral tower and visiting the zoo.  It had all be very enjoyable and coupled with a good hotel and some first class places to eat it had turned out to be a perfect city break.  After reading this series of posts, I hope I might have inspired some of you to think of visiting Chester too, as I’m certain you would enjoy it just as much as us.

During our stay we were guests of  Visit Chester and the Leonardo Hotel and as always, all views and opinions are entirely my own. 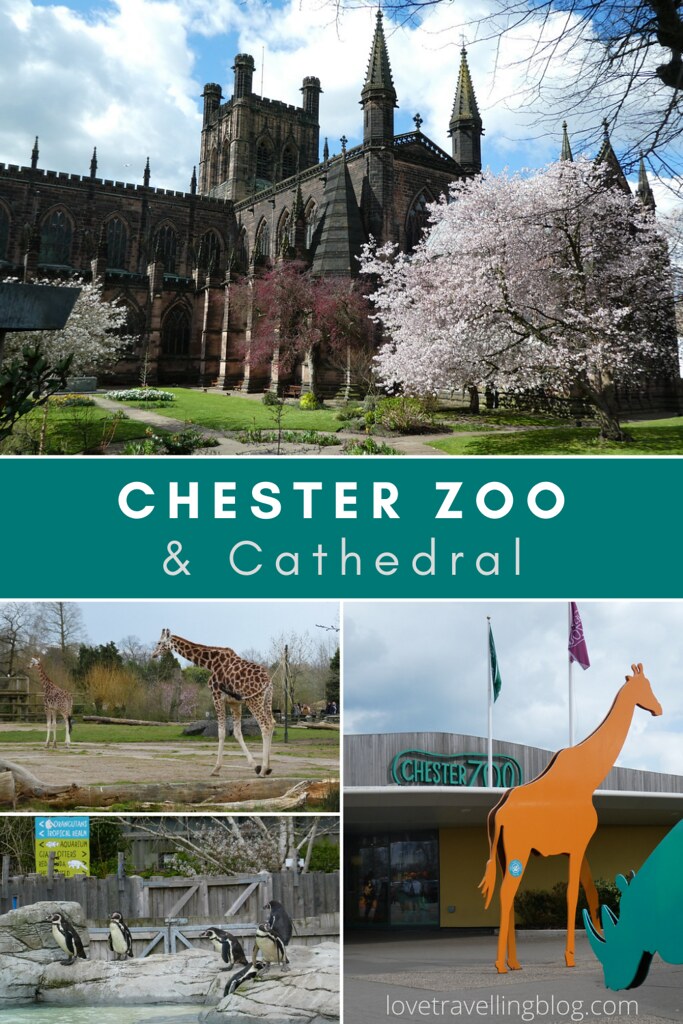