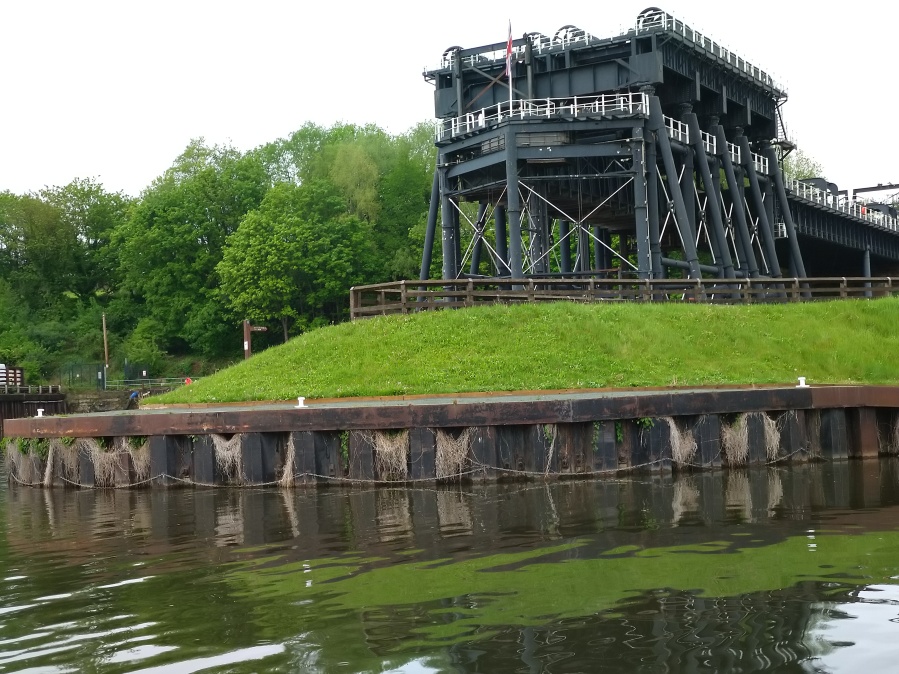 After enjoying a relaxing breakfast in our idyllic Garden Room accommodation at Cheshire Boutique Barns, we set off for Northwich, 22 miles to the north.

On our way we made a brief stop at Nantwich Marina where we had hoped to take a stroll along the towpath of the Shropshire Union canal but the weather wasn’t in our favour so we made a hasty retreat back to our car.

Our activities for the remainder of the day were mostly indoors which was just as well as the rain seemed to be persisting.  Our first stop was at the Lion Salt Works, located in Marston, one mile from Northwich town centre.  The Lion Salt Works made salt since opening in 1894 until production finally ceased in 1986, and were a major employer in Northwich playing a vital role in the community.  It is now one of only four historic open pan salt making sites in the world.

In 2015 the salt works reopened after a £10 million restoration project.  The museum is open from 10.30-5.00 p.m. daily (closed Mondays except public holidays) with standard adult admission £6.25.  It is regarded as one of the finest museums in Cheshire so we were keen to investigate.

Before entering the museum we had little or no knowledge about salt apart from its uses in food preservation and for sprinkling on chips so it was interesting to learn something about the production of this everyday store cupboard item.

On arrival Hannah, one of the museum guides gave us an overview of the museum and its various buildings then sent us on our way with a laminated map.  Our self guided tour began with the geology of the local area.  The Cheshire plain has deep deposits of salt beneath it which is a legacy of the shallow salt marshes formed during the Triassic period.  The Romans were the first to boil the substance bubbling up from natural brine pits to create salt crystals.

Salt, because of its importance in the preservation of food has been an integral part of the Cheshire economy with brines forming locally above the highest remaining rock salt beds.  The museum contains displays of the full range of processes involved in the production of salt from mining and evaporation of the brine to drying, storing and transportation of the refined product.  The process of salt making begins with the brine being pumped from under the ground and stored in brine tanks from where it was then fed by gravity into evaporation pans.

These pan houses allowed the heat and steam to escape as the brine was heated by fires in brick furnaces beneath the pans.  As the brine evaporated salt crystals formed and were moulded into blocks and then taken to the stove house to dry.  Once dry, the salt was then cut or crushed for bagging, a labour intensive task usually carried out by women who stitched up the cotton and hessian bags by hand.

Our tour also took us to the manager’s office and the Red Lion pub where employees could relax after work with a pint whilst having a game of skittles, dominoes or cards.

Visiting the museum was very interesting with the process of boiling brine down to salt crystals clearly explained via audio and video projection.  The site also contains a gift shop, cafe, butterfly garden and children’s play area.

It was then time for a spot of lunch before our second activity of the day which was to be found on the other side of Northwich.  Taking a ride on the Anderton Boat Lift was something we had long wanted to experience as it is listed as being one of the Seven Wonders of the Waterways.  The lift was the winner of the large visitor attraction of the year 2018.  We had already had the pleasure of visiting the Bingley Five Rise Locks also on the list, but as yet none of the others.

There are brown visitor attraction signposts from the centre of Northwich, leading to a large canal side pay and display car park (£2 for 3 hours or £4 all day).  A pathway leads from the parking area to the visitor centre where tickets can be purchased for a ride on the lift (£8.25 standard adult admission) or a combined ticket to include a canal boat trip along to Northwich and back (£12.25).  The latter was unavailable at the time of our visit but we were still excited to take a ride on the lift.

The Anderton Boat Lift hoists boats and barges 50 feet from the River Weaver Navigation to the Trent & Mersey Canal.  It is an incredible feat of engineering perched on the banks of the River Weaver and was built by Edwin Clark in 1875 using two huge water tanks, each with watertight sealable doors (caissons).  The original counter-balanced system was replaced in 1908 by an electric operation.

The lift operated until 1983 when serious deterioration of the structure was discovered. It fell into disrepair laying idle until 2001 when £7 million was raised to fund its restoration.  The lift was then restored to full hydraulic operation with the 1908 structure and pulley wheels retained as a static monument.  After successful completion the lift re-opened in 2002.

Visitors can either ride up or down the lift and I don’t believe it makes any difference from which direction you set off.  Our tickets were for the downward lift so we glanced in the large gift shop and cafe at the top whilst waiting for our boat to depart.  The cafe has floor to ceiling windows with stunning views of the lift mechanism.

Outdoors, we stood at the side of the lift and looked down as the tour boat named after Edwin Clark, the engineer who constructed this ingenious piece of Victorian machinery came into view.

Soon it was time to board and it was indeed a unique experience being manoeuvred into the huge watertight tank which would transport us 50 feet downwards.  It was surprisingly gentle with no thuds or bumps and we waved to the crew of the narrowboat we met midway who were travelling in the opposite direction.  Throughout the 30 minute ride we enjoyed an excellent commentary about the tour boat, the lift, its history and how it had been brought back to life.

I enquired why it was decided to build a lift rather than a set of locks and learnt that a boat lift was cheaper to build and maintain with much faster transit times for boat traffic.

After disembarking at the bottom of the lift, we returned uphill through the lower level visitor centre exhibition hall which documents the lift’s history and the people who worked on and around it.  This level also contains the high tech lift control room which has glass walls for visitors to watch how it operates nowadays.

It had been a splendid trip and I can’t wait to visit the remaining five ‘Wonders of the Waterways’ we’ve yet to experience in the United Kingdom.

After such an interesting day we returned to our accommodation for a rest before having dinner at The Hartford Hall Hotel in Northwich.  It is part of the Marston’s Inn collection of pubs and is a former 17th century nunnery.  We opted to dine in the contemporary restaurant which was stylishly furnished and just perfect for casual dining.

We received a warm, friendly welcome from Isobel and Chris who looked after us during our meal.  The menu is varied with a selection of traditional pub favourites and daily specials all reasonably priced and offering excellent value.  I opted for a sirloin steak with sides of chips and creamy garlic mushrooms which was succulent and cooked perfectly to my liking of medium rare.

Across the table my husband selected the tomato and red pepper glazed cod loin served with crushed herb potatoes, wilted spinach, roasted tomatoes with a pea and mint purée which was beautifully presented and I’m reliably informed tasted delicious.  We accompanied our mains with glasses of wine which we took through to the bar area later and sunk back into deep padded chairs relaxing after such a lovely day out.

Bingley and its Five Rise Locks