After enjoying weekends in the historic centres of York and Lincoln we decided to turn our attention to Chester.  Located in the north west of England the M53 motorway links the city to the main road network with a frequent rail service connecting to major cities.  We opted to travel by train and leaving home bright and early we arrived into Chester by lunchtime.

From the station it only took about 15 minutes to walk into the city centre but if you prefer to save your energy for exploring or are weighed down with luggage then a shuttle bus operates every quarter of an hour.

We’d arranged to stay at The Leonardo Hotel on Pepper Street, located within the historic city walls.  We were too early to check-in so left our bags as we didn’t want to be carrying them around all day.

This newly opened hotel is just steps from Newgate, a beautiful sandstone bridge carrying the walkway of the city walls over Pepper Street.  It was a sunny afternoon and ideal conditions for a stroll along the fortified city walls.  Not only that, it was also a great way of getting an overview of the city’s layout.

Chester was originally the Roman fortress of Deva with its walls created to defend the city.  Nowadays, the walls which extend 2 miles (3 km) are a pleasant place for a stroll and to gain a perspective of the historic city from above.  The walkways are paved and at several access points there is ramp access making them accessible for all.  It was springtime with daffodils out in bloom and we couldn’t have picked a better time to enjoy our walk.

Soon, we had reached Watergate so called because the River Dee once reached this gate.  From there, we had good views along The Groves, Chester’s riverside promenade and the starting point for pleasure boat trips.  I’d just read an information board detailing the abundance of wildlife on the river and it couldn’t have been more true as I then spotted this heron perched on the ancient Roman weir.

Just ahead of us, the old stone arched Dee Bridge then came into view.  This used to be the main route into Wales until 1832 and is still in use today as a secondary route for both motorists and pedestrians.

Chester Castle was the next point of interest, a Norman stronghold that was built by William the Conqueror’s nephew, the first Earl of Chester.  Parts of the buildings are used today as Crown Courts and as a military museum.

The walls then descend to ground level for a short distance and after crossing Grosvenor Bridge the route took us along the side of Chester Racecourse.  The course is also known as The Roodee, which originally opened in 1539 making it the world’s oldest still in operation, built on the site of the old Roman harbour.

Back at a raised level once more we climbed the steps up to the King Charles Tower, located on one corner of the wall.  It was from this lookout point that Charles I is said to have observed the defeat of his army in 1645.

A few steps further and we had the most wonderful view of Chester Cathedral, a stunning Gothic structure that we planned to visit later in our stay.  The cathedral was a medieval Benedictine abbey before becoming a cathedral in 1541.

Our walk along the walks ended at the magnificent Eastgate Clock positioned on a footbridge overlooking Eastgate, Chester’s main shopping street.  The clock was erected in 1899 to commemorate the Diamond Jubilee of Queen Victoria two years earlier.  It is thought to be the second most photographed clock in England after London’s Big Ben and it’s easy to see why.

It was then time for a look around the shops and what a treat we had in store.  Shopping in Chester is like nowhere else as it takes place along tiered streets.  These medieval first floor walkways line the four main streets of the city centre and are known as The Rows.

Steps lead up from ground floor level to long covered balconies lined with shops, galleries and restaurants.  These continuous half-timbered walkways are arranged directly above those at street level and I defy anyone not to marvel at their beauty.  Not all of the magnificent Tudor buildings have withstood the centuries and whilst some are original others date from Victorian times but they are all equally beautiful.

A new visitor attraction recently opened in the former St Michael’s Church so we decided to take a look there next.  Sick to Death (admission £6) is all about the history of diseases, doctors and dying in medieval times and documents all the gory details of medicine through the ages.  Visitors are each handed a UV pen which shows up fluorescent green plague spots splattered around the museum, its a great way to keep children entertained whilst looking around.

We started off by walking down Diagnosis Alley, a filthy disease ridden passageway of olden times.  Next, we experienced a post-mortem room and learnt why they were so important in furthering our understanding of the human body.  Other areas demonstrated the use of herbs and medicinal potions in the apothecary.  The self-guided tour is both fun and educational as there’s a timeline of the key breakthroughs in medicine, covering the invention of antiseptics and x-rays through to the more recent use of anti-viral drugs.

The attraction was conveniently located on the corner of Pepper Street close to our hotel so we popped back there to check-in and to relax awhile.  Our room was located on the 1st floor and of a good size with a comfortable armchair and 50″ television.  We made ourselves cups of tea and couldn’t resist nibbling the complimentary shortbread and stem ginger cookies left for us on the hospitality tray.

Refreshed after our short rest, it was then just a short walk to Storyhouse an award winning cultural centre incorporating a library, theatre and cinema.  The building was formerly a 1926 art-deco Odeon cinema that has been restored and renovated to include a restaurant and two bars.

The library in Storyhouse boasts the longest opening hours in the United Kingdom as it remains open until 11.00 p.m.  It had been suggested that we dine in The Kitchen casual dining restaurant before attending a mid-evening performance.  What a great idea this was, as we were shown to a table surrounded by shelves of books, aptly the library’s cook book collection was just behind where I was sitting.

We were greeted by friendly staff and we sipped glasses of wine whilst studying the menu.  Decisions made, we settled on mains and a dessert and both my Lebanese chicken kebab and my husband’s shredded chilli and date glazed beef shin were very flavoursome, beautifully presented and good value at under £9 each.

I adore Middle Eastern cuisine so couldn’t resist the pear and tahini streusel with a wild cherry sorbet.  Across the table, my husband’s choice of apple, fig and cinnamon sponge served with vanilla pod infused cream looked delectable too, so for the needs of blog research I felt duty bound to sample that one as well (my verdict – also delicious).

We didn’t think we’d allowed ourselves enough time for a coffee before the show started but the helpful server suggested bringing us them in paper cups so we could take them into the theatre with us as this was permitted.

We’d come to see a performance by BalletBoyz Deluxe – eight extraordinarily talented young dancers, their unique style of dance combined with music and film.  The first scene was entitled ‘Ripple’ and was very graceful contrasting well with the second scene entitled Bradley 4:18, which was faster moving and exhilarating.  A short walk back to our hotel followed and we were sound asleep in seconds after such a fun filled day exploring Chester.

A short break in Cheshire 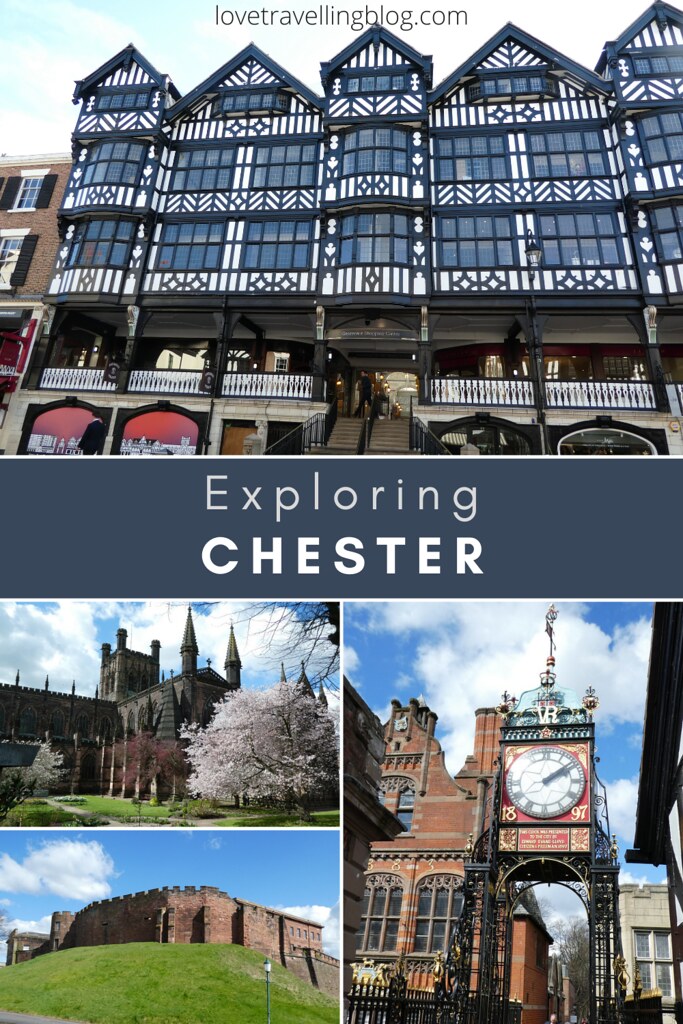