After another blissful night’s sleep we tucked into hearty breakfasts downstairs in the Percy Arm’s cosy restaurant.  As the inn has South African owners included on the menu are some interesting dishes.  My husband was tempted to sample the S.A. breakfast which comprised two fried eggs, bacon, Boerewors farmers sausage, polenta, chakalaka spicy bean relish and tomato.  When served it looked surprisingly similar to the traditional English version but with different flavours.  The dish got a big thumbs up and was said to be very flavoursome whilst my smashed  avocado and eggs were also up there with the best.

After bidding our farewells to Alfred and the rest of the team at The Percy Arms we packed up the car and drove the short distance to the Artingtom Park & Ride on our way into Guildford (£2.30 return per person including unlimited stay parking).  A bus was just about to depart so we dashed across the car park and ten minutes later we were getting off in the town centre.

Guildford is the county town of Surrey, situated just 27 miles south west of London and less than an hour by train, making it a desirable place to live outside the city.  As we were unfamiliar with the town, we had arranged a walking tour with Steve, one of the Guildford Town Guides whom we met beneath the Tunsgate Arch midway along the cobbled high street.

After welcoming us to Guildford, Steve began our walking tour by explaining that the Tunsgate Arch resplendent with Doric columns was built in 1818 as the entrance to the town’s Corn Exchange.  It takes its name as it stands on the site of one of Guildford’s former coaching inns called The Three Tuns.

Facing the arch is the Guildhall with its magnificent gold bracketed clock hanging over the high street.  The building has Tudor origins and was formerly a court room but is now the official office of the mayor and where official events take place.  Unfortunately we had arrived in town on the very morning that scaffolding was being erected ahead of renovations to the building, rendering my photos quite poor, but it couldn’t be helped.

Steve then led us up Tunsgate towards the castle where he pointed out that the Castle Square formed the boundary of the medieval town.  Credit must go the the council gardening department because even though we were visiting in mid-winter the Castle gardens still looked beautiful with their careful planting.  It was quite a dreary morning but we still enjoyed some good views over the old town below.

Moving on, we explored the exterior of the Great Tower (also known as the Castle Keep) which was built by Normans in the early 12th century on the site of an earlier wooden fortress.  Although the castle saw little or no military action it was utilised as the main Surrey and Sussex prison.  Restoration work took place in 2004 and it is now open to the public but was unfortunately closed at the time of our visit.

Our attention was drawn to a sculpture of Alice Through The Looking Glass which was created in memory of the famous children’s author Lewis Carroll who lived nearby with his seven sisters at The Chestnuts until his death in 1898.  It was here that he wrote much of his world famous book.

Our walk continued through the castle arch onto the narrow Quarry Street lined with buildings of architectural interest.  Among them is Guildford Museum (free admission) which documents the town’s rich history.

From Quarry Street we looped back around to the high street and were led down some steps to The Undercroft.  This 13th century stone vaulted space hidden beneath the modern shops of today would once have been a medieval store where expensive clothes, silk and wine would have been sold.  It was pleasing to discover that it has been retained for future generations to enjoy and had we not been on a guided walk, we would surely have walked past without noticing it.

Across the road from there stands The Angel Hotel (dating back to 1522) now Guildford’s only surviving coaching inn.  As Guildford was a convenient stopping point on coaching routes to the south coast, the town attracted up to 200 travellers each day.  The inn continues to be popular with today’s modern travellers.

At the top of the High Street stands the magnificent Abbot’s Hospital founded in 1619 by George Abbot when he was Archbishop of Canterbury, creating these almshouses for the benefit of elderly local people.  The hospital is opposite the Georgian Holy Trinity Church which needed to be re-built in 1761 after its original spire collapsed during alterations to the existing building.

This concluded our Story of Guildford walking tour which I’d highly recommend as we were taken us to some hidden gems that we probably wouldn’t have come across had we just wandered around on our own.

After thanking Steve, our tour guide for showing us around he suggested that we head down to the river for a stroll, so we took his advice and crossed the river at Town Bridge over to Mill Mead.  The Wey Navigation dates from 1653 and was one of the first navigable river systems in England transporting cargo to and from London docks before the arrival of the railway.

A short distance along the river bank stands a second Alice in Wonderland sculpture, this one being Alice and the White Rabbit.  It depicts the opening moments from the children’s book when the white rabbit vanishes down a rabbit hole.

Our stroll continued as far as the Town Mill which for centuries was used for milling corn and pumping the water supply.  We then wandered back into the centre alongside Town Wharf where river barges used to unload their cargoes.  We rounded off our visit to the town with some shopping in the Friary Centre and a spot of lunch in one of the cosy inns.  Back at the Park and Ride bus stop we only had a few minutes to wait for a service to take us back to the car park making it a convenient and inexpensive way of visiting the town.

Readers may have come across Shere before without actually realising it as it is the village where the romantic comedy The Holiday (2006) starring Cameron Diaz, Kate Winslet and Jude Law was filmed alongside a location in Southern California.  In the film, two girls from different countries swap homes to get away from their relationship issues and although the village was a real film location, the exterior of the idyllic cottage was actually constructed in a field near to the village church of St. James for the film set.

We wandered around the village where almost all the buildings look like the lids of chocolate boxes or the feature of jigsaw puzzles with their idyllic timber frames and thatched roofs dating from between 1569 and 1620.  A prominent feature of the village is the Old Fire Station overlooking the village stream which was built in 1885 and today serves as public conveniences.

As well as the Dabbling Duck cafe there are two lovely village pubs so we popped into The William Bray for a pot of tea and a slice of cake to set us up for the journey home.  The pub has a charming interior and glancing at the menu it would make an ideal place to stop for a meal whilst exploring the village.

After driving for a matter of minutes we noticed a signpost to the Newlands Corner viewpoint so we pulled over to take a look.  This popular beauty spot lies just four miles east of Guildford and is the starting point for numerous walks across the Surrey Hills, an Area of Outstanding Natural Beauty (AONB).  The viewpoint has ample free parking, a visitor centre (temporarily closed) and picnic benches.

We didn’t have time to put on our walking boots but instead got out of the car to admire the spectacular views over the Surrey Hills and across the Weald ridge.  It’s an area of chalk downland where the crime writer Agatha Christie staged her disappearance from Newland’s Corner in 1926 but was found a few days later many miles away in Harrogate.  We weren’t intent on staging a disappearance but we did set off north bound heading home after an absolutely beautiful three days exploring the Surrey Hills.

We were guests of  Visit Surrey and The Percy Arms and as always all views and opinions are entirely my own.

A day in Winchester 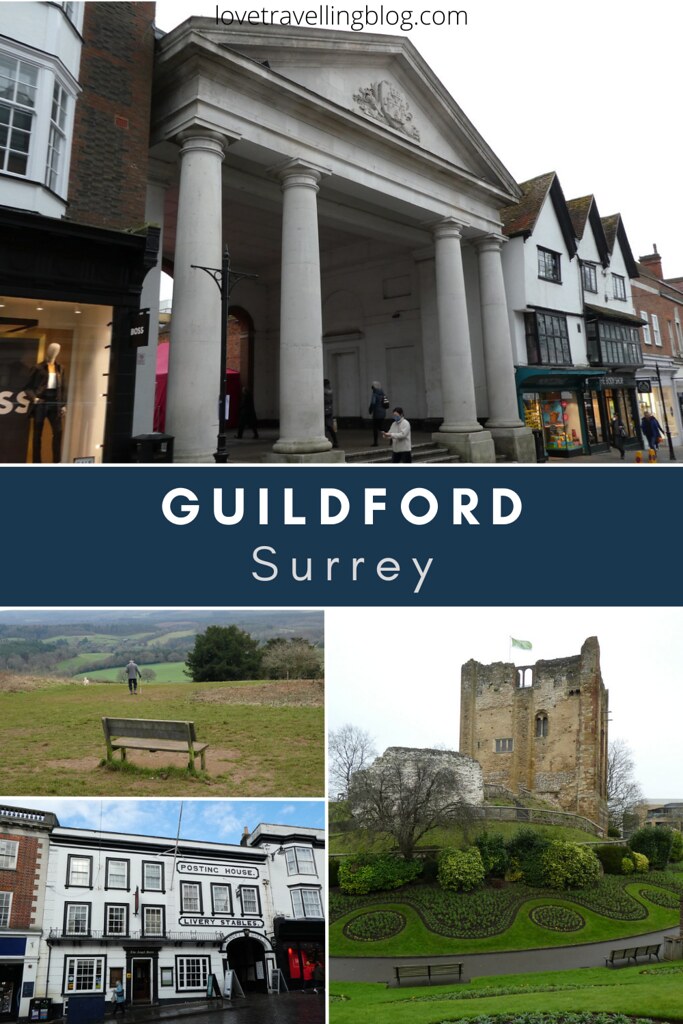