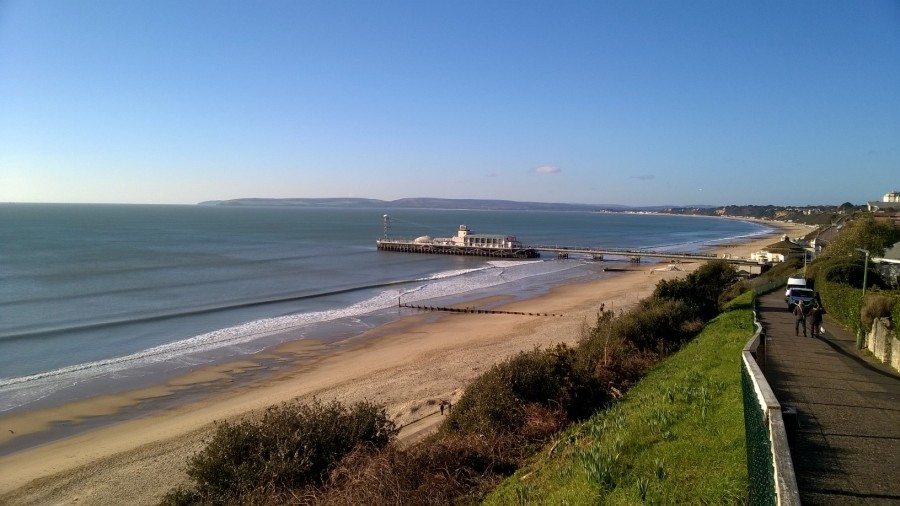 On a cold but bright February morning we packed up the car and left our home in northern England at 9.00 am for a half term break on the south coast of England.  Our destination was Bournemouth in Dorset, 290 miles away.

We stopped for lunch at Bicester Village, an outlet shopping centre in Oxfordshire slightly more than half way to our destination.  It’s only a couple of miles from the M40 motorway junction and the village now has its own railway station with direct access to both Oxford and London (rail journey time from London being only 46 minutes).  More than 130 designer stores can be found in attractive pastel coloured New England style clapboard buildings along with numerous cafes and restaurants.  The Daily Telegraph recently reported that Bicester Village was the No. 2 destination for Chinese visitors to the UK after Buckingham Palace!  After taking a look in some of the stores, we resumed our journey and arrived in Bournemouth at 4.00 pm.  Our accommodation was on the East Cliff, looking out over the English Channel.  After settling in, we enjoyed a delicious meal whilst watching the sunset over the bay.

Another sunny morning with clear blue skies, we started the day with a walk along the East Cliff into the centre of Bournemouth passing the Victorian pier which was constructed in 1880.  Linking the town centre from here are the award winning Lower Gardens complete with Victorian bandstand and a tethered hot air balloon for aerial views over the town and coastline.

We then travelled along the coast to the nearby town of Poole and explored its quaint old town and attractive waterfront.  It was fairly quiet but in summer the quay is bustling with tourists taking boat trips across to the National Trust owned Brownsea Island famous for Lord Baden Powell setting up his first scout camp there in 1907.  The island is also home to one of the only colonies of red squirrels in the country.

Nearby, one can visit the local Poole Pottery where it’s possible to watch demonstrations as well as purchase glazed items from their store.  After lunch, at a branch of Slug and Lettuce we spent an hour exploring the attractive suburb of Westbourne which has lots of small independent retailers.

The above photo is of the beautifully restored Westbourne Victorian arcade where we did a little shopping before returning to our base in Bournemouth for the evening.

A short break in Dorset