The Bournemouth Air Show takes place at the end of August/ early September each year featuring air displays over four days against a backdrop of the beautiful sweeping bay.

There is no admittance charge to the festival and thousands of plane lovers flock to the Dorset resort on the south coast of England to watch this extravaganza.  Following the cancellation of the 2020 show it was exciting for us to be back in Bournemouth to enjoy its 13th edition.

Headlining the show were the amazing Red Arrows who performed at 3.00 p.m. on all four days.  The Red Arrows Royal Air Force Aerobatic Display Team has been in existence since 1964 and are known as the ‘Red’s’ because of their bright red flying suits.

The aerobatic team reach speeds of up to 600 miles an hour in their BAE Systems Hawk T1 jets and even if you aren’t a fan of aircraft it’s always a thrill to watch their breathtaking synchronised formations and precision timing.  We gazed in awe as they performed loops, rolls and painted the sky red, white and blue with their colourful trails and trademark Diamond 9 shape.

Helicopters on display included the RAF Chinook, a twin rotor that can carry up to 55 troops or 10 tonnes of cargo.  Because of its size it’s almost unthinkable that it can perform the aerobatic stunts demonstrated.  The Royal Navy Wildcat helicopter also entertained the crowds over Bournemouth bay.  It’s designed to serve battlefield and warfare roles and can reach speeds of 300 km/hr.

Enthralling the crowds of spectators down on the beach and watching from the cliff tops were The Blades, a British civilian aerobatic team and the only full-time civilian aerobatic team in the United Kingdom.  All the pilots are former members of the Royal Air Force, having all previously flown with the Red Arrows.  The team fly Extra EA300 two seat aerobatic monoplanes and were exciting to watch.

Crowds remained on the beach as dusk fell for the evening flying entertainment with an Rolls Royce Spitfire, RAF Typhoon and The Fireflies on display.

The noise from the Typhoon could be heard from miles away as it roared past, rattling windows in its wake.  As a complete contrast to the Typhoon, the graceful Fireflies lit up the skies with a beautiful pyrotechnic display creating a fitting end to the first two days.

Performing each day, the Tigers Free Fall Parachute Team showed off their impressive skills with seven parachute jumpers falling from the sky thousands of feet in the air to a marker on the ground.  As one of the British army’s premier display teams they certainly captivated the crowds with their flag flying routines.

From sky to sea, a first for the air show this year was a parade of new and classic Sunseeker motor yachts who are based just along the coast in Poole.

The AeroSuperBatics WingWalkers are the world’s only formation wing walking team and perform regularly at the air show.  The wing walkers are strapped to the top of Boeing Stearman biplanes while they perform dazzling aerobatics, handstands and close formation flypasts.  We had been thrilled with their display on the second day of the show and were excited to be watching them again the following afternoon.

However, shortly after the commencement of their display, one of the planes developed engine trouble and decided to return to Bournemouth Airport.  Unfortunately it was unable to make it so far and had to ditch into the sea just along the coast at Sandbanks.  Thankfully, both the pilot and Wing Walker were rescued immediately suffering only minor injuries as the plane came down next to the chain ferry and there were many boats to lend a hand nearby.  Following this incident it was understandable that flying was suspended for the remainder of the day.

There was much to see on the ground as well as the festival site stretches all the way between Bournemouth and Boscombe piers with military villages, a funfair, trade stands together with many food and drink options.  Along the East Cliff queues of people were waiting for a chance to sit in a Red Arrows plane in the RAF Village and others eager to climb on board an army tank on the beach.

The HM RM Band Collingwood performed the Beat Retreat Sunset Ceremony in the Lower Gardens at 6.30 p,m. on three of the evenings and although I’ve watched it before, it’s still a wonderful sight.  Beat Retreat is a military ceremony and has its origins in the early years of armed warfare when the beating of drums and the parading of guards heralded the return to camp and the lowering of flags at the end of the day.  Nowadays it’s all about marching to the band playing iconic tunes.

The town’s Lower Gardens were also home to the vintage garden HMS Bathtub Bar which was proving popular with its live music from noon until late evening.

Nearby in the bandstand we enjoyed watching the Prince of Wales Army Band performing on one of the afternoons to rapturous applause.

If all this wasn’t enough, to round off both the Friday and Saturday displays, a magnificent firework display took place at 10.00 p.m. from Bournemouth Pier with crowds staying in the town to watch the spectacle from both the beach and cliff tops.

Throughout the festival the weather stayed fine and although it did turn cloudy at times, conditions remained perfect for flying and for wandering around the festival site.  It was sad that an accident had occurred but on the following day when flying resumed, it was announced the pair on board had been shaken but otherwise unharmed.

A walk from Bournemouth to Sandbanks

A walk between Bournemouth and Boscombe Piers 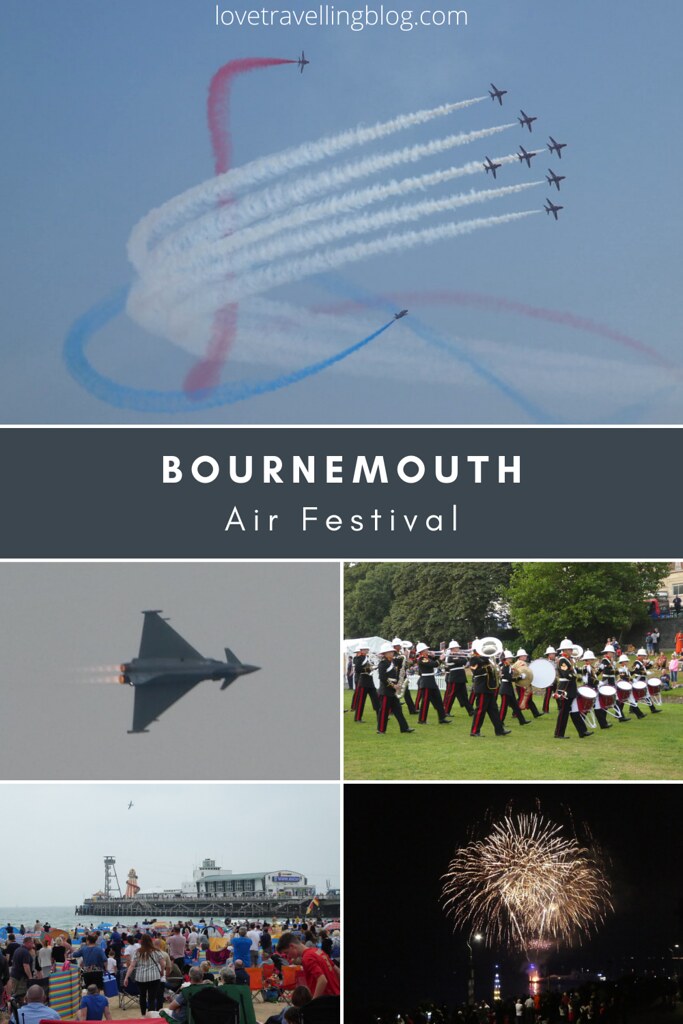