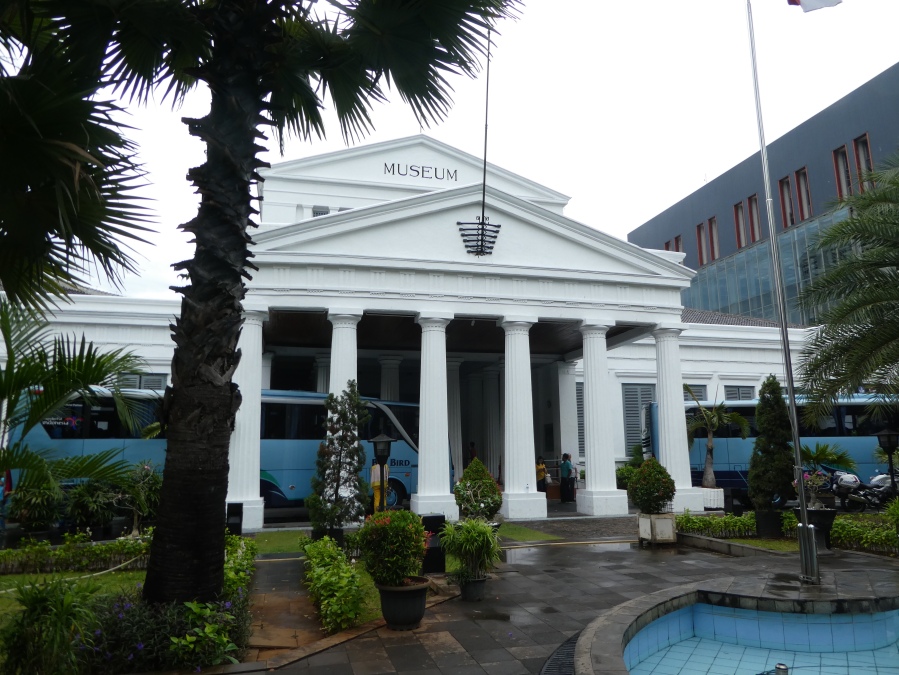 It was 8.00 a.m. when we drew back the curtains after sleeping soundly for almost ten hours, catching up on deprived sleep from the previous night of travelling.  Soon we were ready to experience breakfast in the Jakarta Novotel’s restaurant on the 6th floor.  We found a vast array of cooked dishes under stainless steel cloches but not being partial to the likes of chicken with rice for breakfast, we opted for the fresh fruit, yoghurts and cheese.  The egg station had a blackboard menu propped up on its counter and I was pleased to note that my favourite Eggs Benedict was available so I opted for this.  Rather than English muffins, the eggs were served on two brioche buns but very tasty, all the same.

We glanced at the English version of the Jakarta Post but didn’t find much to interest us so we spent a short time reading the news on our iPads whilst sipping cups of freshly brewed coffee.

Just as we were ready to head outdoors it started raining heavily so we sheltered in the foyer until our Grab car arrived to take us to the Museum of Indonesia.  This was a slightly longer journey than the ones we had taken the previous day but the fare only came to IDR 27,000 (£1.49).  The entrance fee to this museum was IDR 10,000 (55p) each and, as with the museums we had visited the previous day, it was located in a beautiful colonial building.

Although the museum contained a large number of artefacts, the layout was very dated and not very easy to follow.  Several school parties were exploring the galleries with their clipboards and pens but otherwise it was reasonably quiet with few, if any other European visitors.

On leaving the museum, we crossed an extremely busy road to view the exterior of the Presidential Palace.  We were wrong in thinking that crossing the road at an electronic pedestrian crossing would be safe as some irresponsible motorists and scooter riders just hurtle through the red lights causing mayhem to those trying to safely find their way across the road.  This wasn’t just a one-off occurrence, but happened to us numerous times during our stay in Jakarta making it difficult to cross, so take care.

After viewing the palace and the solitary guard on sentry duty, we continued along to the Merdeka Square Park but ended up having to walk a long way around its perimeter fence to find an entrance gate that was open as a number of them were padlocked for some unknown reason.

It had been our intention to take the lift to the top of the Freedom Tower but there was a large school party waiting to ascend and as the lift capacity was only 11, it would have been a long wait.  As we didn’t want to waste a long time waiting to climb a tower that wasn’t particularly high we changed our plans and wandered along to the National Mosque instead.  Luck wasn’t on our side as we found this to be closed for major renovations!

Our journey wasn’t entirely wasted though as just across the road from the mosque stands the city’s catholic cathedral so we dodged the traffic, making it safely inside the church where a service was taking place.

We then attempted to order a Grab car from outside the cathedral to take us to the National Gallery but as we were unable to connect to a Wi-Fi network and there were no hotels or cafes nearby where we could have popped in for a drink and to access their internet, we were forced to walk.  It felt exceedingly hot as we made our way along the traffic choked, polluted streets of the city centre and we were glad to rest our legs and sip cool drinks on the shady terrace of the museum cafe.

Entrance to the National Gallery is free with its galleries housed in yet another splendid Dutch colonial building.  Unlike most of the other city centre museums, the National Gallery had been modernised and was attractively laid out.  Again, there were few visitors apart from two bus loads of secondary school children.

A little further along the road we passed the vast U.S. Embassy and the Jakarta City Hall before reaching our final destination of the day which was The National Library of Indonesia which is also known as ‘The Window of The World’.  The library’s entrance is somewhat unusual as it is accessed via a single storey heritage building, with the new library towering in its shadow.

The library has only been open for two years and welcomes visitors.  It features a very impressive entrance hall with a huge bookcase leading all the way up to the uppermost floor.

It was interesting exploring each of the subject zones but my favourite part of the library was the heritage area with its antique bookcases, desks and reading lamps.  Accessing the free Wi-Fi we were able to order a Grab car back to the hotel.  This arrived promptly and cost us IDR 24,000 (£1.31).

The time had now reached 4.30 p.m. so after a cup of tea in our room, we popped down to the sauna to relax.  A few people were using the gym but again we enjoyed the luxury of having the sauna to ourselves.

Instead of eating out, we both decided that it would be rather nice to enjoy the hotel’s high tea which was available until 8.00 p.m.  Alongside pots of tea, we tucked in to a large spread comprising dainty sandwiches, dim sum, fruit, scones and a selection of irresistible small cakes.

Whilst enjoying our meal we chatted to one of the waitresses who was very friendly and keen to practice her English.  She told us that it took her almost two hours to commute to work which seemed such a long time for that level of work.  She explained that she could only use her car on alternate days to comply with the city’s campaign to ease congestion and keep traffic moving.

Later, we enjoyed a short stroll around the neighbourhood in the pleasantly cool evening air before returning to our hotel after an interesting day exploring the Indonesian capital.

Starting our journey to Bangkok