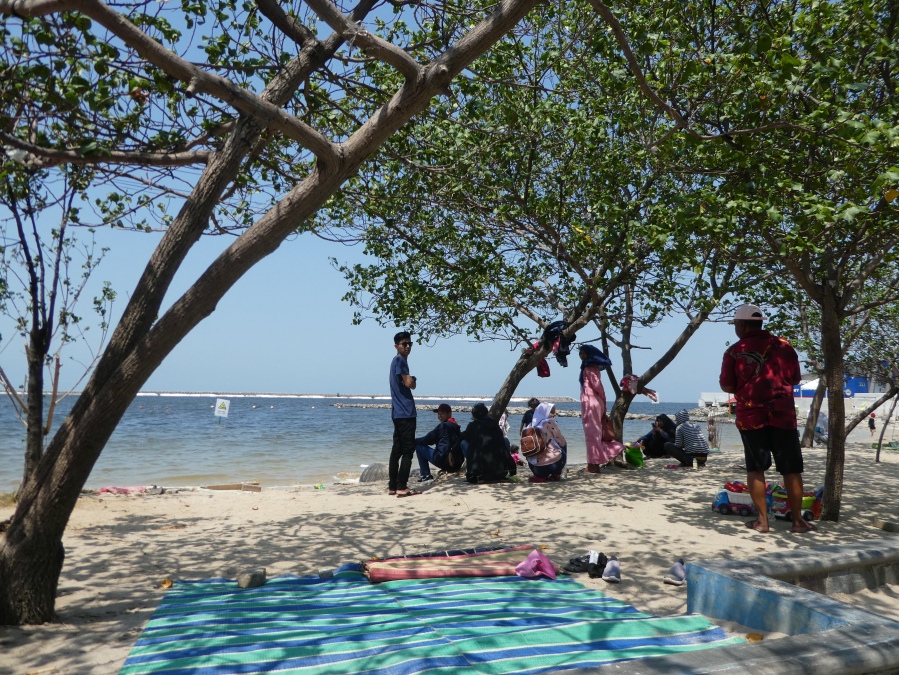 For the first time this holiday it seemed a struggle getting out of bed, a sure sign that we must have adapted to the 8 hour time difference.  Going down to breakfast the restaurant manager either had a good memory or maybe it was because we appeared to be the only European guests staying at the Novotel, as he enquired if it was to be eggs Benedict and an omelette once again, to which we replied yes.

We weren’t in any particular rush and looking around discovered that we were in fact the last to leave the restaurant even though it was only 10.15 a.m.  Glancing through the window it appeared sunny so I grabbed my sun hat just as we were leaving the hotel.  As taxis are so cheap in Indonesia and public transport scarce, we ordered a Grab Car (IDR 31,000 (£1.74) over to Ancol eco-park taking 25 minutes.  There was a slight misunderstanding as we reached the park gates as the driver informed us that if we wished to be dropped off inside we would then need to pay an additional IDR 25,000 (£1.40) toll per person.  Taking this into consideration we paid the driver before entering the park and continued on foot.  What we didn’t realise was that IDR 25,000 was the actual entrance fee and we needed to pay it anyway to enter the park. So, if you are also planning to visit the eco-park, pay the driver the toll and request to be dropped off further in as the park is very large.

Just inside the park entrance we came across a free shuttle bus stop which operates a service at 15 minute intervals, but looking at the timetable realised we had just missed one, so decided to continue on foot.  The eco-park is definitely worth a visit and it felt so refreshing to breathe in the fresh air after spending two days in the heavily polluted city centre.

With the exception of a few school groups the park seemed deserted and we enjoyed following some boardwalk trails alongside streams and crossing narrow wooden bridges between them.  The park is home to both a bird park and funfair, neither of which we wanted to visit but whilst wandering around we came across one or two delightful resort hotels consisting of thatched small tree houses suspended over the water where visitors to the park can call in for coffee or a lunchtime snack.

Continuing our walk we reached the Allianz eco-park bird watching towers but for some reason these were both closed despite other activities and attractions operating normally.

After sitting on a shady bench for a few minutes to drink some water and study our map, we found our way to the seashore where we called in a mini-market to buy some chocolate ice creams on sticks.  After purchasing them, we sat on a seat outdoors to eat them but unbelievably neither of us could open the packets which was very peculiar as they were branded Walls, and we’ve never had any issues previously.  I popped back inside with them and the checkout assistant also tried without success to open them and had to go and find a pair of scissors to complete the task. Needless to say, by this time they had started to melt and chocolate was dripping over the counter so she discarded them and gave us replacements which opened first time.  It was so strange as we’ve never been defeated with ice cream packaging before!

Having eventually finished our ice creams we strolled along the seafront which led onto a heart shaped boardwalk, its shape only apparent from an elevated position.  The seafront was very pleasant albeit very quiet but I expect it’s much busier at weekends when city dwellers crave some fresh sea air away from the heavy traffic in the city centre.

We walked as far as the Ancol Beach City Mall but on looking inside, it wasn’t much more than a few fast food outlets.  It did though have free Wi-Fi and a road alongside it, so at least we were able to order a Grab Car back to the hotel IDR 43,000 (£2.41).

Back at the hotel we tried to use our room cards to operate the lift but neither of them would work, it clearly wasn’t our day, so we returned to reception to get them re-activated then returned to our room for a well earned rest and a cup of tea.

As with previous evenings, we popped down to the pool area for a relaxing sauna and then enjoyed a meal in a Chinese restaurant just behind the hotel.  The food was freshly prepared and our bowls of vegetable broth followed by sweet and sour chicken with rice came to a total of only IDR 105,500 (£5.90) for the two of us.

A short walk around the neighbourhood followed before returning to our hotel.  After Skyping family and gathering our belongings together for the next stage of our holiday it was off to bed for a good night’s rest.