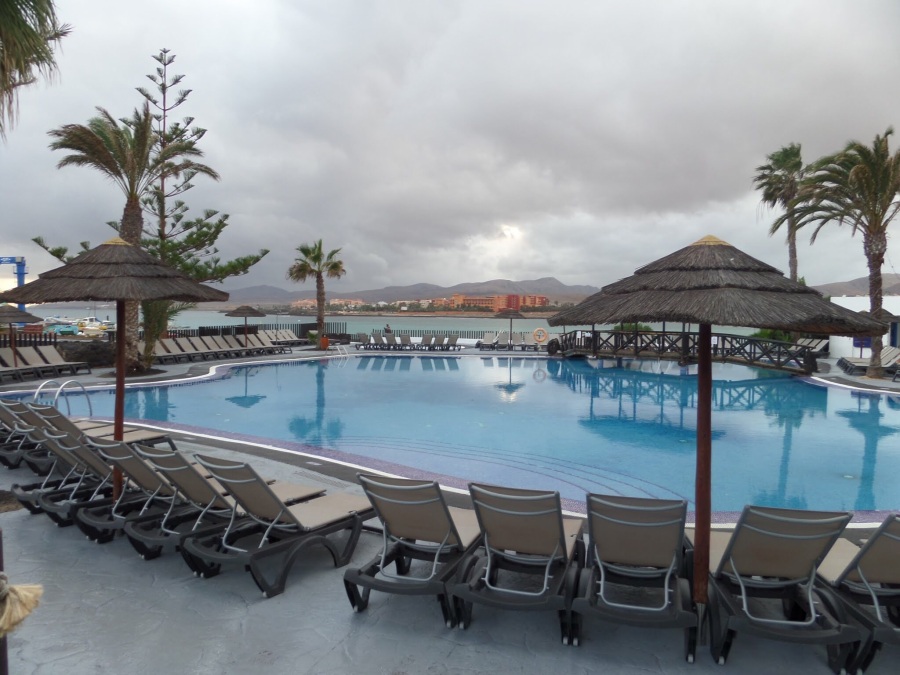 It was necessary to get up at 3.30 am as our flight to Fuerteventura was scheduled to depart at 6.20 am.  Fortunately we managed to sleep for most of the flight so we arrived feeling refreshed.

There was little activity in Fuerteventura Airport and we were soon waiting for a bus to take us to to Caletta de Fusta, 25 minutes drive to the south.

The landscape was totally barren and rocky.  No natural vegetation grows on the island and first impressions weren’t too good.  As it was a little too early to check in to our hotel we decided to have an early lunch.  The pedestrianised area of Caletta seemed to be filled with a collection of English bars and gift shops.  Sadly, we were unable to find a Spanish restaurant so we had to settle for the uninspiring ‘Blues Bar’  which only served English food, so we ordered two full English breakfasts, served by an English waitress, with Heart London playing in the background!  Did we really travel so far for this! The only reminder that we were in Fuerteventura was that we were sitting outside in the warm sunshine in early December.

We walked along to our hotel for the next three nights, the Barcelo Hotel Castillo Beach Resort, a large complex stretching around the Caletta bay.

It features suites set in beautifully tended gardens.  We were fortunate to be allocated one in a central location, but as the site stretches far into the distance, some people could face a 15 minute walk to the restaurant.   After relaxing on our sun terrace awhile, we decided it was time to explore our resort.  There are five outdoor pools plus several bars and cafes, some of which were closed at this time of year.   There was a wooden promenade boardwalk that led to a small marina and near there we saw two seals jumping in and out of the water.

After a little more sunbathing it was time for dinner in the hotel’s main restaurant.  This was attractively furnished with views over the pool and the bay.  Food was served buffet style and there were a large selection of dishes on offer. Walking back to our room, we noticed that the temperature had dropped considerably since it had gone dark.

A weekend in Madrid

5 thoughts on “Day 1. A weekend in Fuerteventura”