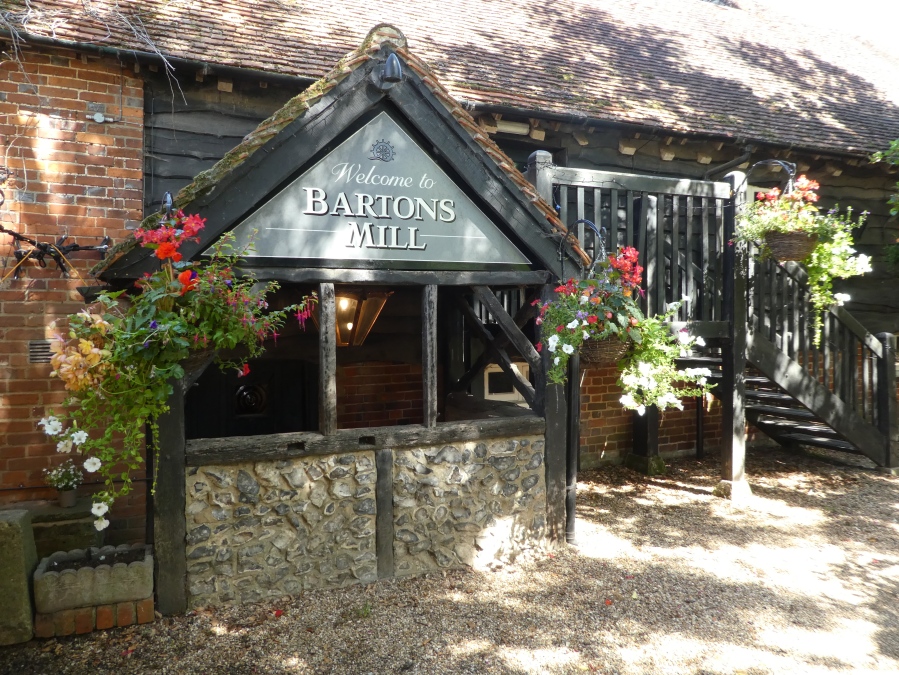 We planned a short break in Basingstoke, the largest town in Hampshire, located close to the West Berkshire border.  The town lies 30 miles (48km) north east of Southampton and 48 miles (77 km) south west of London. It is easily accessible by road being just a few minutes drive from Junction 6 of the M3 motorway. For visitors arriving by train, Basingstoke lies on the main South Western Railway with frequent services from London Waterloo taking approximately one hour.

Often thought of as a ‘new’ town, Basingstoke is actually an old market town that was mentioned in the Domesday Book of 1086.  The town grew rapidly in the 1960’s when displaced families from London re-located there following the devastation of the Second World War.  Basingstoke is often overlooked by its more famous neighbour Winchester 19 miles away but has much to offer as we were about to discover during our short break.

After parking the car, we began our tour of the town in Eastrop Park located close to the town centre on the River Lodden which is a tributary of the River Thames.   The river flows through the centre of the park with walking paths and a cycle track running alongside. As it was such a nice day there were quite a lot of people about enjoying the boating lake, paddling pool and relaxing with a coffee on the terrace of the Boathouse Cafe.

One entrance to the park is close to Festival Place, a large indoor shopping centre so we decided to explore there next and find somewhere for a bite to eat.  The mall contains a wide variety of shops over two floors plus a selection of cafes and restaurants, some indoors and others arranged along an inviting food street leading off from Festival Square towards a multi-screen cinema complex.

We left Festival Place by its rear exit and made our way up a gentle slope to the Top of the Town where a twice weekly market takes place each Wednesday and Saturday. This older part of the town is home to numerous historic buildings and celebrates Basingstoke’s cultural heritage.  Overlooking the market place and located in the former Victorian town hall stands the Willis Museum and Sainsbury Gallery.

Standing in front of the museum is a statue of the author which was unveiled in 2017 to commemorate the 200th anniversary of her death.

Whilst Bath and Winchester are well known for their Jane Austen connections the famous author was actually born in Steventon just outside Basingstoke where her father was rector at the local parish church.

We popped inside the museum which is run by the Hampshire Cultural Trust. Admission is free admission and it is open daily between 10.00-16.00. Galleries document the history of Basingstoke from medieval days to the post-war expansion of the town.   Exhibits include room settings of a 1950’s kitchen and the story of George Willis a local clockmaker and former mayor of whom the museum takes its name.

There is also detailed information on Jane Austen who lived in the town until the family’s move to Bath in 1801 and of the three famous books she started writing whilst residing there, namely Northanger Abbey, Sense and Sensibility and Pride and Prejudice.

The Sainsbury Gallery on the ground floor hosts temporary exhibitions with one entitled Mythomania taking place during our visit.  There’s also an attractive small cafe that seemed to be a popular meeting place for locals with a gift shop corner to one side.

Before leaving the museum we picked up a leaflet about a town trail which detailed information on the town’s older buildings some of which date back to Tudor times. We learnt that Basingstoke was once an important staging post on the coaching route from London to Andover and London Street in the town’s old quarter was at that time a busy main thoroughfare to London.

A short walk from the Willis Museum is War Memorial Park which comprises mature woodland, a bandstand and an aviary.   The park was purchased by public subscription after the First World War to house Basingstoke’s memorial   Previously the gardens were the grounds to Goldings, a Georgian estate which was laid out in the 1780’s.  The park features a tree trail with labelled historic hornbeam, larch, oak, plane, ash, sycamore, pine, yew and lime trees that have been growing there since the days of the Golding estate which, as well as being of interest, is a good way to recognise trees from their size, shape and type of leaves.

We then wandered back through the town to where we had left the car and made the short journey to Barton’s Mill in Old Basing. Although it took less than ten minutes to drive to the hotel from the centre of town we felt as if we had been transported deep into the Hampshire countryside as Barton’s Mill is a converted mill with a stream running through its large beer garden.

We checked in at the atmospheric bar which contains the remains of a working water wheel and after collecting our room key, followed instructions across the courtyard to where the twelve rooms are located.  We were delighted with the spacious room to which we had been allocated with its high ceiling, large sofa and comfortable bed.

After settling in, we sat out at one of the tables overlooking the stream enjoying refreshing glasses of beer and a plate of nibbles.  The pub is set in the most idyllic location and we sat back and relaxed watching the antics of a duck with her ducklings paddling by.

After a nice long rest, we enjoyed dinner in the restaurant which oozed rustic charm  with its inglenook fireplace, exposed beams and most importantly delicious, freshly prepared dishes.

After working our way through all three courses of the menu we ventured outside into the beer garden where live entertainment was taking place.   It was a balmy, still evening and finding seats enjoyed listening to The Henry’s a vocal duo who entertained the audience with a selection of Beatles hits.   It was the perfect way to end the day and back in our room we were asleep soon after our heads touched the pillows.

Aldermaston to Woolhampton on the Kennet and Avon Canal

46 thoughts on “Day 1. A weekend in Basingstoke”