The Great Yorkshire Show (GYS) was back with a bang this year with all 140,000 tickets selling out in advance of the 2022 show.  The 163rd show took place between 12-15 July in Harrogate, North Yorkshire with fine weather and mostly sunny conditions each day.  The show is England’s premier agricultural event organised by the Yorkshire Agricultural Society celebrating the best of food, farming and the countryside.

With 140,000 visitors over four days you might think that there would be huge traffic jams getting into the showground but as the event is so well organised with multiple entrance gates, delays are minimal.  Directions to the show are signposted from the edge of town with large free car parks surrounding each of the gates.  The show is open each day between 8.00 a.m. and 6.00 p.m. so I’d suggest an early start to make the most of your time as there is so much to see and do.  For visitors using public transport a free shuttle bus operates from outside Harrogate railway station which works really well as when one bus fills up another one arrives straightaway.  An alternate option is to leave the train at Hornbeam Park and follow the one mile greenway walking route to the nearest gate which I took on the final day.

The showground covers a whopping 250 acre grassland site with numerous permanent exhibition halls and pavilions that can be used for smaller events throughout the year.  At its heart is the grandstand and main ring where a full programme of activities take place each day.

The show has been honoured to receive many visits from members of the Royal family over the years including several visits from Queen Elizabeth II.  This year was no exception as on the first day HRH Princess Anne who is patron of the Beef Shorthorn Cattle Society visited the show as the Shorthorn’s are celebrating their 200th anniversary this year.  During her visit, the princess also visited the food hall, cheese show and met with some of the farming charities.

Animals play a big part in the show annually and this year the society were inundated with a record number of entries.  A staggering 8,500 of the finest animals in the country competed over the four days with judging for dairy champions to commercial beef taking place in the cattle rings.  We also took an avid interest in some of the pig, sheep and goat classes which were being judged whilst we were there.

The welfare of all the livestock is paramount at all times and as it was so warm fans had been installed in the cattle sheds to keep the animals from over-heating.

Its not just big animals that put in an appearance at the Great Yorkshire Show with the Supreme Rabbit championship won by a most beautiful and cuddly Dwarf Lop red-eyed white bunny belonging to an exhibitor in Manchester.  Poultry classes unfortunately had to be dropped this year due to outbreaks of avian-flu but hopefully they will be able to return next year.

In addition to the livestock classes, the show featured several new additions this year including sheep dog trials in the main ring and a new GYS stage where farming celebrities were interviewed by television presenter Christine Talbot.  These included the Yorkshire Shepherdess Amanda Owen and Countryfile presenter Matt Baker who were also to be seen in other parts of the showground.

Moving on to farm machinery, on display were tractors of every shape and size, cultivators, hay balers, milking machines and, in fact everything agricultural.  Visitors are welcome to climb on board some of the cabs which must be every young child’s dream to sit at the helm of a combine harvester.

The Yorkshire Sporting soprano Lizzie Jones entertained the main ring each afternoon and on the last day sang the National anthem which was accompanied by a video montage of each of the Queen’s visits to the showground and this was lovely to see.

In other sections of the showground we watched sheep shearing, demonstrating how a sheep’s wool can be removed in one piece.  We learnt that the wool from a British sheep is valued at a lowly 25p now, far less than the cost of shearing an individual sheep to keep the animals cool in summer and tick free.  The sheep shearing competitions are great fun to watch as each competitor has to carefully remove the wool from five sheep in as short a time as possible.  Crowds get behind the competitors and there is much chanting and cheering.

Wandering around the showground there was a drystone wall building display. Walls of this type are commonplace around the edges of fields in Yorkshire and are held together without the need for mortar.  The structures are stable because of the traditional method used of carefully selecting stones that fit together.  It’s a dying art but one which will hopefully continue.

After the plants, flowers and vegetables were successfully displayed outdoors last year for the first time, this was repeated for 2022.  With wall-to-wall sunshine even on the final day there appeared to be little evidence of wilting in the exceptionally warm weather as the plants had been regularly watered.

Show jumping takes place in both the main and Top Spec White Rose rings with top class competitions culminating in the Cock O’ the North championship on the third day which was exciting to watch.  Riders need to navigate their way around the course over some high fences and across a water jump.  Some tight turns are needed in the jump off as it is against the clock.

On the final afternoon we watched the Pony Club Games in the main ring.  It’s fast and furious with teams battling it out in both the Junior and Senior classes with children aged between 8 and 16.  Teams of up to six riders take part in a series of races that involved a mix of turns, handovers, vaulting, galloping around obstacles, running over stepping stones and dropping objects into buckets.  It was such a fun way to end the show and I couldn’t believe how agile even the youngest competitors were at clambering onto their ponies at top speed.

Other highlights in the main ring included the Grand Cattle Parade, the heavy horses and of course the brass band.  There’s so much on offer that it’s almost impossible to see it all in one day so it’s a good idea to study the programme and plan your time carefully.

Food plays a huge part in the show every year with one of the country’s largest cheese competitions taking place and judging of yoghurts, honey and cakes to name just a few.  Of course, a show like this wouldn’t be the same without lots of places to buy food and drink, shop for country inspired clothes and gifts and best of all partake of lots of free samples as you stroll around.

I hope you have enjoyed my tour of The Great Yorkshire Show 2022.  It was a real celebration of the countryside, food and agriculture offering something for the entire family.  If I may have inspired you to experience it for yourself then it will be taking place in Harrogate, North Yorkshire between 11th – 14th July next year.  I’ve only just returned home but I’m already looking forward to it with the dates firmly in my diary!

I was a guest of the Great Yorkshire Show and as always all views and opinions are entirely my own. 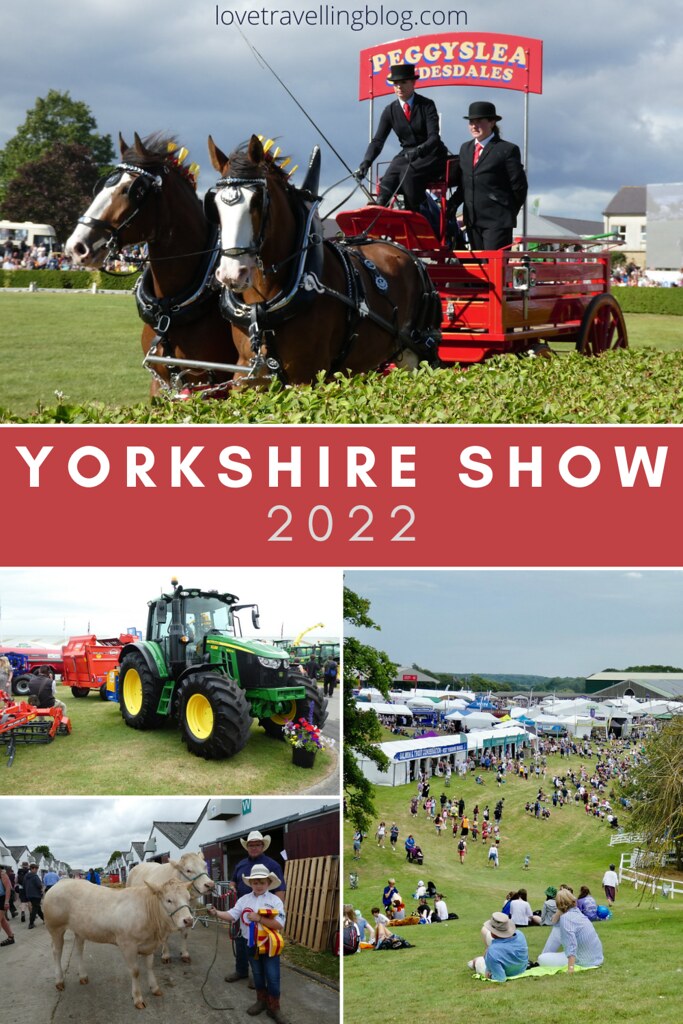