Our Bratislava city break was drawing to a close but with a late evening flight back to the U.K. we still had a full day of sightseeing to look forward to.  We started off by visiting the Blue Church located quite close to our hotel in the eastern part of the old town.

It’s known as the Blue Church as everything about it is pale blue from its exterior façade to its oval interior and mosaics.  The church has limited opening hours but when closed, visitors are still able to view its beautiful interior quite easily through the metal railings across its entrance.

From there, we took a tram to the edge of the old town so that we could visit the Presidential Palace.  This was constructed in 1760 on the orders of Count Grassalkovich who was a nobleman and chairman of the Hungarian chamber.  The palace is now the official residence of the President of the Slovak Republic.  As it is only open to the public on one day each year it is unlikely you will get an opportunity to look inside.  However, it’s possible to watch the changing of the guard through the railings which takes place at noon each day.

After viewing the front of the palace we then wandered around to the rear where there is a large park that originally formed the palace gardens.  This comprises lawns with fountains, flowerbeds and a statue of Empress Maria Theresa on horseback.

Moving on, we walked a short distance to catch a 147 bus, which took us close to the Slavin Memorial, up a steep hill.  We just needed to climb a few steps up to the monument which is dedicated to the thousands of Soviet soldiers killed in battles liberating Slovakia during the Second World War.  The 40m high obelisk is topped by a bronze figure of a Red Army soldier holding a banner.  It is a well maintained site with a cemetery containing over 6,000 war graves.  As well as visiting for its historical significance, the hilltop also affords panoramic views of the city below.

We timed our visit well as we only had to wait a few minutes for the bus back down to the city centre.  This gave us just enough time to enjoy an ice cream before heading to the tourist office to participate in a one hour walking tour of the city.  Tours take place at 2.00 p.m. daily and cost €15 per person but are free to holders of the Bratislava Card.  Please note that you need to reserve a place on the tour a minimum of two hours in advance.

I always enjoy a city walking tour especially if it’s on the first day of a visit to a city I’ve not been to before as it helps to set the scene for exploring independently later.  Although we’d already looked around and visited numerous museums in Bratislava ourselves the walking tour was still very interesting.  Our local guide shared lots of information about the city’s history, people and culture and pointed out many hidden gems including statues and plaques that we weren’t aware of.

We were shown one of the 178 small gold crowns embedded into the pavement following the royal route that started from the Vydricka Gate near the cathedral leading though to St. Michael’s Gate, the only remaining entrance to the town.  The gate is a city landmark with its Gothic tower and green domed copper spire but not visible at present whilst major restoration work takes place.

Our tour ended outside St. Martin’s Cathedral so after thanking Linda our guide, we took the opportunity to look inside as on our first day when we had tried to visit, it was closed.  It’s a beautiful three nave Gothic cathedral which served as the coronation church for Hungarian kings and their consorts.  A 300 kg gilded replica of the Hungarian royal crown commemorating these historic events can be seen perched on the cathedral roof.

Leaving there we crossed the UFO bridge to take a walk along the embankment and from across the river we had some excellent views of the castle and of the Danube river cruise boats moored along the river bank.

Our walk took us as far as the Apollo bridge close to the Eurovea Galleria shopping centre which comprises two main buildings divided by a small public square.  Along one side are numerous attractive bars and restaurants all with riverside terraces.  After selecting one for a leisurely meal, we popped back to the hotel to collect our luggage before taking Tram 1 back to the railway station followed by Bus 62 to the airport.

Our flight back to London Stansted was the final one of the evening to depart so the airport was very quiet and it was quick and easy to get through.  We’d adored everything about our visit to Bratislava as the Slovakian capital with its beautiful architecture, cobblestone streets and interesting museums makes for a lovely city break.

Our visit was supported by Visit Bratislava and as always, all views and opinions are entirely my own.

A weekend in Nuremberg 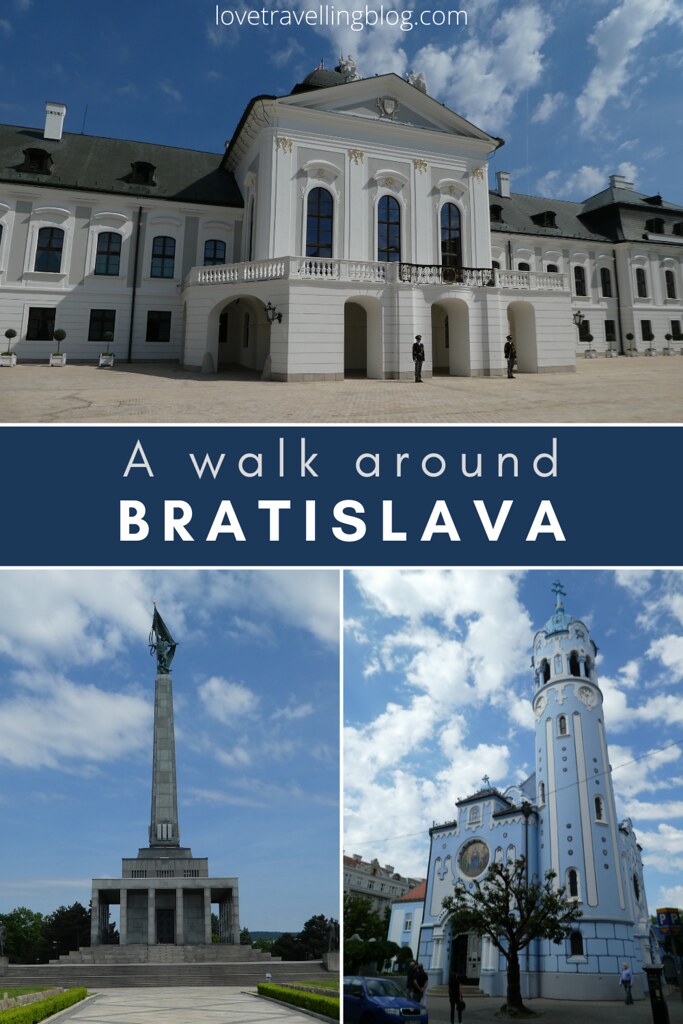 42 thoughts on “Day 4. A walk around Bratislava city centre”