We’d slept like logs in our comfortable bed at the Vesting Hotel, Naarden and what a treat there was in store for us down in the restaurant.  Rather than a buffet, guests are served their own breakfast platters complete with freshly baked bread and pastries.  The boiled eggs were deliciously soft, the cappuccinos brewed to perfection and it was the best possible way to start our day.

Our plan for the morning was to visit the Singer Laren Museum (standard admission €17) in the nearby small town of Laren and we arranged a taxi for the short 15 minute journey.  For those visitors planning to visit Laren on a day trip from Amsterdam it’s possible by taking a train from Central Station to Hilversum followed by a short bus ride to the centre of Laren.  ARTT tickets offer good value for regional travel at €19.50 for 24 hours with longer periods also available.

Laren is part of the Het Gooi region of the Netherlands noted for its spectacular landscapes and starting out as a farming village it became a base for artists from around the world during the 19th and 20th centuries.  The biggest reminder of this is the Singer Laren museum which was originally a villa built at the beginning of the last century by the American couple Anna and William Singer.  The villa was called De Wilde Zwanen (wild swans) and whilst living there, the couple amassed an impressive art collection and received visits from many artists.

After William’s death, Anna founded the Singer Memorial Foundation and added a museum and theatre to the villa which opened in 1956.  The Singer Laren museum has recently expanded following the donation of a private collection and includes works from the period 1880-1950 by French painters, focussing on modernism and of artists who have painted landscapes in Laren and the surrounding area.  In addition to paintings and sketches the museum boasts seven works by the French sculptor Augusta Rodin.

It’s new sculpture garden was designed by Piet Oudolf, the internationally renowned architect who designed New York City’s High Line.  The garden is decorated with sculptures connecting art to nature and has an attractive cafe terrace and a conservatory featuring artwork.

The museum also has a beautiful cafe/restaurant where we enjoyed our morning cups of coffee, a large gift shop and temporary exhibition galleries.

Leaving the museum we explored the centre of Laren.  The small town has much to offer with its charming tree lined streets lined with galleries, boutiques, cafes and restaurants.  Wandering around, it was easy to see why it inspired so many artists through the ages.  An artistic trail is currently being developed with information boards to be positioned where some of the landscapes were painted.

Along leafy lanes there were many beautiful homes partially secluded by the trees some of them with thatched roofs and all of them idyllic places to live.

Unfortunately, some dark clouds formed overhead and we encountered our only rain shower of the trip as we followed a path through scenic heathland at the edge of the town.

However, despite the gloom we’d enjoyed our visit to both the museum and the little town and I would definitely recommend a visit.

Leaving Laren, we picked up another taxi for the 15 minute drive to Muiden as we wished to explore the town and its impressive castle.  If visiting Muiden as a day trip from Amsterdam then you can take the sprinter train to Weesp (16 minutes) followed by an hourly bus to Muiden (12 minutes).

Located just 16 km south east of Amsterdam, Muiderslot Castle was, along with Naarden, a key link in the Amsterdam Defence Line, a 135 km long fortification that once protected the capital from invaders.  This fairy-tale like castle with its characteristic round corner towers and moat is reputed to be the most famous medieval castle in the Netherlands.

The fortress stands at the mouth of the River Vecht and was founded by Floris V in 1280.  Shortly afterwards in 1296 the castle was destroyed and in 1380 a new castle was built on the ruins of the old one.  The castle was restored between 1895-1910 and over a century later remains in perfect condition.  Over the years it has seen life as a fortress, a private home and a prison before becoming a castle museum.  Standard entrance  to the museum is €16.50 and included in the IAmsterdam Card.

We approached the impressive castle over its drawbridge and on arrival collected audio guides included in the admission price.  It was explained that the castle tour was in two parts, the tower and the castle itself and after viewing one area we should return to get our audio guides re-configured for the other section.

We opted to begin with the round tower tour which involved climbing quite a lot of narrow winding staircases but wasn’t difficult.  We used our audio guides at touch-in points to listen to short excerpts which provided us with useful background information of the part of the castle we were passing through.

There were good views from the tower look-out points as the dark clouds were giving way to sunlight.  From there we looked down on the drawbridge and moat and across to the pretty harbour of Muiden.

Moving on to the main part of the castle we viewed numerous galleries containing a collection of armour, weapons and utensils from the 13th century.  Other rooms were furnished as they would have been in the 17th century when the poet, writer and historian Pieter C. Hooft lived in the castle.  Adorning the walls were a beautiful collection of paintings from the Dutch Golden Age.

After exploring the castle interior we crossed the moat to take a stroll in the plum orchard and historic garden which has been landscaped in 17th century style.

Before leaving, we then walked along a raised footpath through the castle grounds from where we enjoyed more splendid views of the fortress.  As there’s so much to see in the castle I would set aside a minimum of two hours for a visit.

Having glimpsed Muiden harbour from the castle we then walked alongside it admiring the boats moored there.  We passed the ferry that takes visitors out to Fort Pampus, a 19th century sea fort that was part of the waterline collection of forts.  Fort Pampus sits on an artificial island than can only be reached by boat.  The ferry departs hourly taking 20 minutes but the seasonal service had not started operating during our visit.

The small town of Muiden is very attractive with its gable fronted houses overlooking the Vecht river.  Along there we sat out on a cafe terrace enjoying glasses of beer watching the bridge open and close allowing boats to pass through.

After a little look around the town we then returned to our hotel in Naarden to collect our luggage before going on to Schiphol airport for our late evening flight home.

The time had passed by much too quickly and we were sad to be leaving but still it was very pleasurable to enjoy a glass of fizz and a bite to eat in the KLM Crown Lounge before departure.

Our four days in Amsterdam and the surrounding area had been lovely and we’d enjoyed the contrast of spending part of the time in the city centre and the remainder exploring interesting places in the surrounding area.  I hope this series of posts might inspire you to follow in our footsteps and plan a trip to the Netherlands as it’s beautiful whatever the time of year.

During our visit, we were guests of I Amsterdam and all views and opinions are entirely my own. 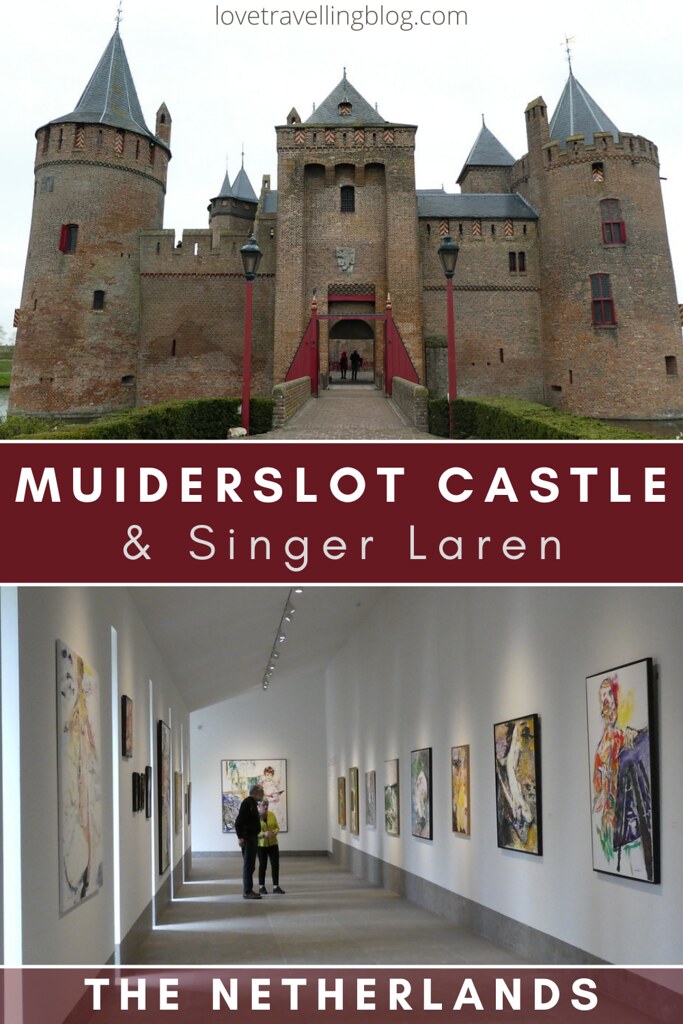