After enjoying a leisurely breakfast in the Park Plaza Vondelpark’s restaurant, we checked out of the hotel leaving our luggage to collect later.  We’d decided on a morning’s sightseeing and felt we couldn’t visit Amsterdam without taking a canal cruise.  We therefore took a tram to Westermarkt, close to Anne Frank’s House on the Prinsengracht canal from where multiple canal trips depart.

We opted for a Circle Line Cruise, €16 and included in the IAmsterdam Card.  The boat was very comfortable with a glass roof and sliding windows that could easily be pushed open for taking photos.  Our 75 minute cruise firstly took us anti-clockwise along the Prinsengracht canal, beside the Jordaan district with its scenic narrow waterways.  Our informative captain and guide Albert told us that this was once a working class neighbourhood but has since become one of the most charming and sought after parts of the city.

At regular intervals throughout the boat trip we heard a pre-recorded commentary of landmarks we were passing.  This was provided in four languages and supplemented with live chat from Albert.  He told us that at 24 he was the youngest skipper of the Circle Line fleet but was not inexperienced in the least as he recounted interesting stories about the Dutch way of life, Amsterdam and its history.  This created a more personal experience keeping all the passengers on board entertained.

Our tour continued along Amsterdam’s numerous canals, passing many houseboats along the way as these have become a popular housing option over the years.  Once a cheaper alternative to houses and apartments they have now however become extremely expensive as coupled with purchasing the houseboat one has to pay costly mooring fees for the prime city centre location.

After crossing the Amstel River we then emerged out onto the much wider IJ from where we had stunning views of Central Station and the A’Dam Tower on the north bank.  Just beyond Central Station and on our way back to the Prinsengracht canal we then passed the Gouden Reael, or Western Islands district, consisting of three artificial islands.  We learnt that between 1610 and 1615 these were built as an extension to the harbour and contain warehouses that have been there since the 17th century Dutch Golden Age.

Overall our cruise had been a relaxing 75 minute trip, providing us with a different perspective of the city from the water.

After the boat trip we headed to the Rijksmuseum, the national museum of the Netherlands.  Entrance €20 but free for those 18 and under and holders of the IAmsterdam Card.  At the time of our visit (April 2022) it was necessary to pre-book a timed entry slot which worked well as it only took a couple of minutes to have our tickets checked before going inside.

This vast museum contains over one million artworks and covers 800 years of the Dutch Masters from 1200 to the present date.  It would be almost impossible to view the entire museum in one visit so we selected brief highlights starting first with the Gallery of Honour, displaying masterpieces by the Dutch Golden Age artists including Rembrandt, Hals, Van Gogh and Vermeer.  The museum’s most famous painting being Rembrandt’s Night Watch which takes pride of place at one end the gallery.

The Night Watch is currently on display behind glass as it has been removed from its frame by conservationists for the first time since 1975 as part of a restoration project to remove some warping of its canvas.  The painting measures an enormous 3.8m x 4.5m (12ft x 14ft) and we were able to get up close to the glass to inspect it.

Not only the artwork but the building itself is a work of art with its tall, domed ceilings, sweeping staircases and stained glass windows.  As a lover of libraries we couldn’t miss visiting the beautiful Cuypers Library on the 2nd floor which can also be viewed from the gallery on the floor above.  The library is both the largest and oldest art historical library in the Netherlands.

In addition to paintings, the museum houses sculpture and Delft ware galleries, a collection of dolls houses and a World War Two fighter plane.  The 17th century Dolls Houses were interesting as they weren’t designed for children but as collectibles for wealthy Dutch women.  Everything was made to scale using the same materials as in a full sized luxury home.

After leaving the museum, we stopped off for our morning cups of coffee in a leafy square before returning to the hotel for our luggage and then to head back to Central Station to embark on the second part of our stay in the Netherlands.  We boarded an early afternoon train to Naarden-Bussum, a 30 minute journey just 21km from Amsterdam.  Single fare €5.40 and included in our Amsterdam and Regional Travel Ticket which offers excellent value if travelling out of the centre as it is valid on all forms of regional transport.  Naarden is easy to reach on a day trip from Amsterdam but for a change of scene and to learn about the history of the Netherlands I would recommend arranging an overnight stay.

At Naarden-Bussum we intended to catch Bus 110 into Naarden but noticing that we had just missed one, decided instead that it would be quicker to walk as it only takes about 25 minutes.  On the way, we passed a small deer park with ostriches and a collection of farm animals which we wouldn’t have seen if travelling by bus.

Naarden is a UNESCO World Heritage star shaped fortress which was built to protect the city from attacks from the east and is one of the best preserved medieval fortified towns in Europe.  We crossed the moat and entered the town through the Utrecht Gate which dates from 1877.

We’d arranged to stay at the Vesting Hotel located just five minutes away in the centre of town.  The Vesting Hotel (meaning fortress) is a historic boutique hotel offering luxurious accommodation.  We were booked into the Torenkamer (tower room) on the second floor which was very special as it had exposed beams and a very tall ceiling leading up to the top of the building’s tower.  The room was luxurious with a contemporary feel and we knew we would be happy there but it was already mid-afternoon and there was sightseeing to be done so we left relaxing there for later.

Spring had definitely sprung as it was so warm and sunny for mid-April that we were able to leave our coats behind for the first time in the year as we headed to the tourist office close to the Utrecht Gate.

Here we met Roderick, one of the town guides who would be accompanying us on a walking tour of the fortress.

Our guide began by giving us some background history of the fortress which resembles a military piece of art, shaped as a 12 point star with a double ring of moats and an arrowhead at each tip, which served as a defence system.  If only we could have flown over the fortress by helicopter, we could have appreciated the full scale of its beauty from above!

He went on to tell us that the town was founded in 996 as a harbour village on the Zuiderzee and due to its strategic position was later developed into a fortress with double city walls, moats, bastion and city gates.  Our walk then started with a stroll along the ancient city walls which run along the edges of the star shaped moat.  Roderick explained that the fortress had been designed as a star shape with moats and ramparts for added protection following the Spanish massacre of 1572.

Pathways lead up to the battlements from where we could look down on the disguised casements where soldiers would have lived and worked in cramped conditions.  Some of these casements and the bastion have now been utilised as artisan’s workshops

Metal pipes known as Bastion Promers sticking out of the soil were pointed out to us as we walked by.  These were listening pipes so that people could be alerted of what was happening outdoors.

Continuing into the centre of the fortress, most of its beautiful buildings have historic significance such as Het Arsenal dating from 1688.  This is where military ammunition and weapons would have been stored.  This building is now a national monument and the home to a Dutch interior design company and stylish restaurant.

Other landmarks in the town include the Grote Kerk of St. Vitus which is famous for its annual performance of the St. Matthew Passion each Easter.  The church was constructed in 1380 and not only served the town as a place of worship but also as a lookout and communications tower for the military.

Our tour then took us along Marktstraat, Naarden’s charming narrow high street looking delightful with its numerous upscale restaurants, cafes, shops and galleries.  Another claim to fame of the town is that it is also home to the smallest branch of Albert Heijn, the Netherlands largest chain of supermarkets.  It’s so well disguised that we hadn’t even noticed it was a food store until it was pointed out to us.

We concluded our walk back to the hotel where we viewed the city hall opposite.  The building is from 1602 and is a magnificent preserved example of Dutch Renaissance architecture.  The city council chamber retains its intricate oak panelling and sculptural decorations and is now a sought after wedding venue and centre for cultural events.  The walking tour ended here and had been very informative as we’d discovered much more than just exploring on our own.  If you are interested in join one of these tours they can be booked at the local tourist office.

Back at the hotel, we had time to relax awhile in our tower room and enjoy a welcome cup of tea.  It was then a treat to luxuriate in our contemporary styled bathroom and get ready for a meal in the hotel restaurant.

With its central location in Naarden and reputation, it’s very popular and so I suggest making a reservation in advance to avoid disappointment.  The stylish restaurant has a roaring log fire, attractive bar and open kitchen and is the perfect place to round off a day of sightseeing.

The menu is impressive and with friendly service we relaxed over our glasses of wine and enjoyed a leisurely meal.  All produce is locally sourced wherever possible and beautifully presented.  It was difficult deciding what to select as everything looked appealing and our mains of fish of the day and rump steak were cooked perfectly and very flavoursome.

Staying in the centre of Amsterdam had been lovely but it was equally nice to also experience life in the delightful fortress town of Naarden. 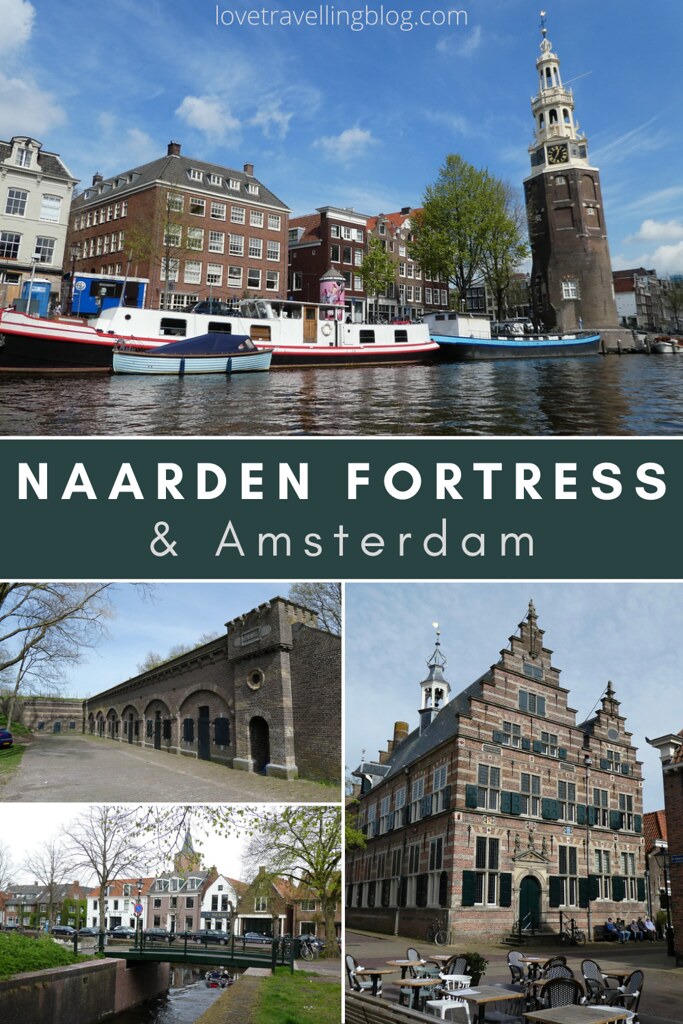