It wouldn’t be a proper Christmas for me without a visit to Manchester as it’s a city that knows exactly how to put on the Yuletide cheer.  Christmas markets are to be found all over the centre and when darkness falls the charming little wooden huts take on even more of a magical charm with their flickering fairy lights and the aroma of mulled wine and sizzling sausages filling the air.

It’s hard to believe that back in 1999 when the first Christmas Market came to Manchester it consisted of one single row of huts and has now grown to be one of the largest and most popular markets in the country.

Following its cancellation last winter due to COVID, the Christmas markets returned last month with a bang adding some much needed festive sparkle across the city centre.  Albert Square which surrounds the magnificent town hall normally takes centre stage of the celebrations but due to major building renovations the square is out of bounds so the market’s hub has moved to a new home in Piccadilly Gardens.

The square has been transformed into a wonderland with yuletide bars, festive food stalls and little wooden cabins offering everything from scented candles to wooden toys.  The main focus of the square is the Winter Garden which will be remain open until 3rd January 2022 with a live music stage alongside festive pop-up bars, food and gift stalls.

On a recent visit I enjoyed viewing the light sculpture trail and especially liked the installation featuring the Manchester worker bee which has been an emblem of the city for over 150 years.  The bee denotes Mancunians hard work ethic and the city being a hive of activity.

The elegant St. Ann’s Square has a more relaxed vibe with its two rows of traditional wooden cabins lining the square offering tempting sausages, stollen and lebkuchen.  There’s also a cosy wooden beer hall at one end that’s very popular.  In front of St. Ann’s Church is the home of the city’s nativity scene which reminds us what Christmas is all about.

I can’t go to a Christmas market without sipping at least one mug of mulled wine and as payment includes a £3 mug deposit visitors then have the option of taking it home as a souvenir.  As everyone was so pleased to be back at the Manchester markets this year all 40,000 mugs were snapped up during the first 10 days as mementos so other supplies had to be brought in, including surplus mugs from previous years.

Exchange Square is another vibrant festive market location filling the area around the Arndale Centre and Selfridges.  There’s lots of food choices here including the extremely popular Porky Pig stall which had lengthy queues for their tasty battered pigs in blankets and unusual Yorkshire pudding wraps.

Cathedral Gardens is home to the ice rink and as it’s under cover skaters can comfortably enjoy the atmosphere come rain or shine which is obviously practical but perhaps not so atmospheric as skating under the stars.

After wandering around the Christmas market locations it was then time to make our way to Manchester Opera House on Quay Street.  It was a joy to attend a production there with its auditorium resplendent in green and gold and its fluted Corinthian columns and balconies.

We’d come to see the pantomime Aladdin and settled down in the cosy Stalls Bar for a glass of wine and a browse through the programme before finding our seats.  With numerous lockdowns it had been quite awhile since I’d been to the theatre and I looked forward with excited anticipation to a fun filled evening.  On every seat a Christmas card had been placed inscribed with the message ‘Panto has missed you’ and reading it, it brought home to me how much I had missed live theatre performances too.

From the moment the curtain was raised the fast moving performance took us on a spectacular journey to the land of Mancunia where we were introduced to a wish granting genie and an evil sorcerer.  The sets were stunning along with some sensational singing and dancing that had the audience clapping along.

Appealing to all ages, it was a memorable magic carpet ride of escapism to a fantasy world with a barrel load of laughs about Manchester and tongue in cheek topical jokes on 10 Downing Street and Boris Johnson.

No expense had been spared with dazzling over the top costumes from Widow Twankey’s extravagant hats to witnessing a jaw dropping flying carpet floating over the stalls.

The entire cast were outstanding with the hugely talented Ben Nickless as Wishee Washee having boundless energy, cheeky antics and perfect comic timing.  X Factor favourite, Alexandra Burke as Scheherazade, the Spirit of the Ring fairy storyteller delighted the audience with some of her biggest hits including Bad Boys and Hallelujah which were carefully choreographed into the action.

Children were enthralled too with the usual panto boos and hisses, trying to catch bubbles floating overhead from the wishee washee laundry and the slapstick comedy scene where a giant water squirter scored a direct hit on me in the front stalls.  By the time the finale came around everyone in the packed audience was up on their feet applauding and singing along with a grin on their faces not wanting the performance to end.

The production continues until 2nd January and  I defy anyone attending not to enjoy a sensational, uplifting performance sprinkled with laughter, singing and dancing.  If you might be interested in seeing this top notch production for yourselves then further details are available here.

As this will be my final post before Christmas I would like to take the opportunity of wishing everyone a very Happy Christmas wherever you may be.

We were guests of Manchester Opera House and as always all views and opinions are entirely my own. 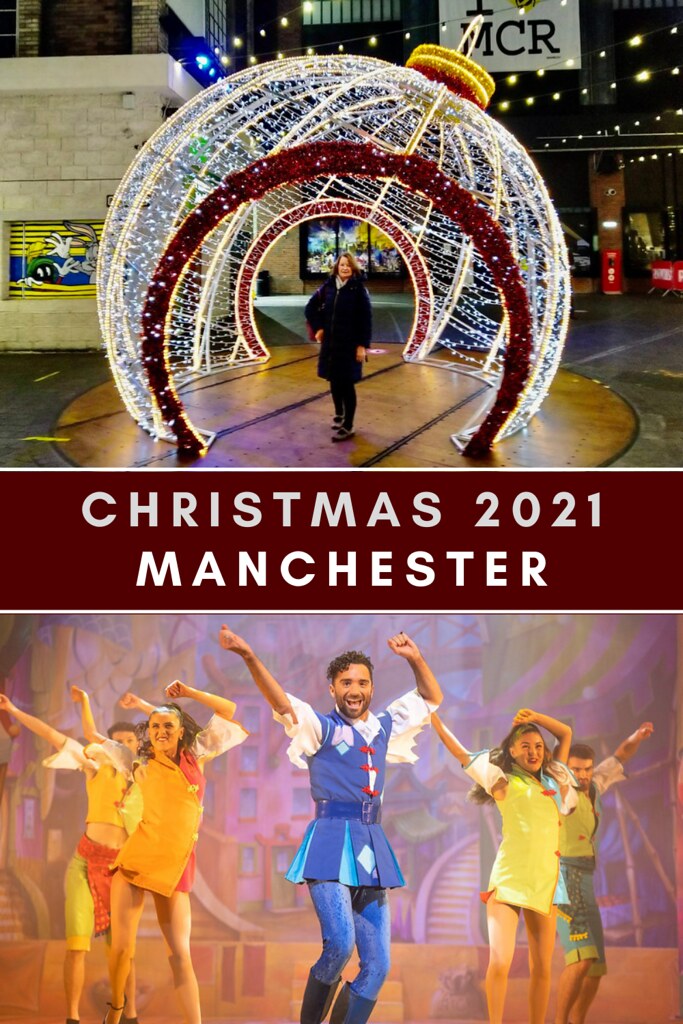