Staying overnight at the Yeats Country Hotel had been a good option for exploring the Sligo section of the Wild Atlantic Way.  Breakfast was served in the restaurant and seated at a window table we were able to take in the sea views whilst setting ourselves up for the day.

After bidding our farewell to the friendly staff we were on our way once again, this time heading back across the border into Northern Ireland on our way to the Fermanagh Lakelands. Our journey took us along the banks of Glencar Lough with the backdrop of Benbulben mountain in the distance.  The lough has some dramatic steep sided cliffs with numerous waterfalls cascading down the rocky cliff face.

Unfortunately there wasn’t time for us to take the 1 km trail to the Glencar Waterfall viewpoint on this trip, which is said to be particularly spectacular following periods of wet weather, as we were heading for an underground adventure.

Enniskillen was to be our ultimate destination of the day but beforehand we wanted to take the opportunity of visiting Marble Arch Caves set in the foothills of the Cuilcagh Mountains, 12 miles away.  Located in a UNESCO GeoPark (a region with geological heritage of international significance) the landscape surrounding the caves was formed 330 million years ago.

We had pre-arranged tickets for a 60 minute guided tour and instructions stated that visitors should arrive 30 minutes prior to this.  Unfortunately we got held up on a narrow road behind a farm vehicle which delayed us slightly but we were still there before the tour started.

Tours usually start with a subterranean boat tour but due to COVID restrictions this wasn’t running and instead begun by following a path from the rear of the visitor centre and then descending 150 steps to enter the cave.  An informative guide then took us on a 1.5 km walk lasting one hour through a labyrinth of caves and narrow winding passageways illuminated with subtle lighting.  We experienced a stunningly beautiful world of underground rivers, waterfalls and soaring chambers.  The magnificent cave formations, stalactites and stalagmites glistened and we gazed in wonderment as our guide pointed out features giving an interesting commentary as we wandered around.

There were only a few flights of steps to climb up and down in the cave system itself and it was just necessary to dip our heads occasionally so it would be unlikely for anyone to feel claustrophobic.  The hour long tour was fascinating and the time seemed to fly by.  I would suggest wearing sturdy shoes and warm clothing whatever the time of year as the temperature of the caves is a constant and chilly 10 degrees.

Afterwards we looked around the large gift shop in the visitor centre before returning to the car.  A short distance along the road within the geo-park is the parking area leading to the Cuilcagh Boardwalk Trail also known as the Stairway to Heaven.  The route meanders over tracks, across boardwalks and up steep staircases taking between 3-5 hours for the round trip covering 7.5 miles.   It’s an immensely popular activity but not one we had time to take up the challenge of that day but spurred on by my ability to conquer Binevenagh Mountain earlier in the holiday, I’d happily give it a go on a future visit.

Rather than a strenuous hike, we took the scenic drive into Enniskillen town centre finding free parking by the riverside.  It’s the county town of Fermanagh and Northern Ireland’s only island town, as Enniskillen is located on a natural island separating the upper and lower segments of Lough Erne.

We explored the town by wandering along its lengthy Main Street which runs through the centre, confusingly changing its name six times along its length.  A small market was taking place in the Buttermarket (town square) which is surrounded by arts and crafts shops.

Ready for a bite to eat, we spotted the Jolly Sandwich which looked inviting.  Being a Saturday lunchtime there was quite a queue snaking its way along the pavement but the wait was worth it as our coffee and homemade cakes were divine.

Refuelled, we were raring to go so we set off to explore Enniskillen Castle and its Museums (standard admission £5).  The 600 year old castle overlooks the River Erne and is one of the best preserved castles in Northern Ireland.  The castle is modelled on Scottish fortresses with a curtain wall reinforced by turrets encircling a tower keep.  It was built by the Gaelic Lord of Fermanagh Hugh Maguire to defend passages into Ulster.

In the late 18th century the castle developed as a military barracks and is now the home of Enniskillen visitor centre and two museums, The Inniskillings Museums and the Fermanagh County Museum.

The galleries in the restored barrack coach house cover Fermanagh’s Lakeland history from pre-historic times to the present day.  We also explored the ground floor of the Castle Keep, the Heritage Centre and castle grounds.

The galleries cover natural history, rural traditions and local crafts.  I was particularly interested in the section on Belleek Pottery which was established in 1857 and holds a special place in Northern Ireland’s cultural and commercial heritage.  The factory is still in operation today using handcrafted techniques passed down through generations.  Factory tours are available and this is somewhere else I would like to visit on a return trip to these parts.

The Inniskillings Museum located on the upper floor of the Castle Keep was closed at the time of our visit so we were unable to view its display of weapons, badges, medals and engravings.

On leaving the museum we made our way back to the lakeside so that we could go hydrobiking on Lough Erne with Erne Adventures (£20).  This was something new for me to try, cycling on water instead of dry land!

We were met by one of the team who kitted us out with lifejackets, adjusted the height of the bike seats and helped us on board.  I was somewhat apprehensive about the windy weather conditions and worried that I might topple off into the lake but after being re-assured that the bikes were very stable, we were on our way.

After my first few tentative turns of the pedals I found the hydrobike very easy to ride and virtually impossible to tip over.  Pedalling on, we enjoyed the beautiful views around the town and castle from the perspective of the water.

Safety boats are always on hand and although we didn’t need their assistance it was reassuring to know they were there.  We cycled all the way around the island going beneath bridges, passing the castle and Broadmeadow shopping centre.  It was a good work out for my leg and thigh muscles and even the rain and wind didn’t mar our enjoyment, I’m so glad I gave it a go!

Back in the car it was just a short drive to the Belmore Court and Motel on the edge of town.  The accommodation comprises a 30 room hotel with adjoining motel style units.  We must have looked a bedraggled pair as we were being swiftly checked in at reception but were soon relaxing in our comfortable room.

As well as being a great place to stay, a real bonus of Belmore Court is that it is within easy walking distance to the centre of Enniskillen 10 minutes away.  We had booked a table for dinner at The Firehouse in the heart of the town on Townhall Street.

Here we were greeted by exceptionally friendly staff and seated in a booth overlooking the open kitchen, perfectly positioned so that we could watch meals being prepared as we were enjoying a drink.

The Firehouse had a great atmosphere and the food was up there with the best.  Our starters of garlic and chilli prawn and chicken wings were really yummy followed by mouthwatering, tender steaks.  Service was attentive without being intrusive and Ill definitely be heading back to The Firehouse when I’m back in town.

It was raining again as we ventured outside to return to our hotel but soon we were tucked up in our comfortable bed just as my leg muscles were beginning to ache following my earlier exertions. 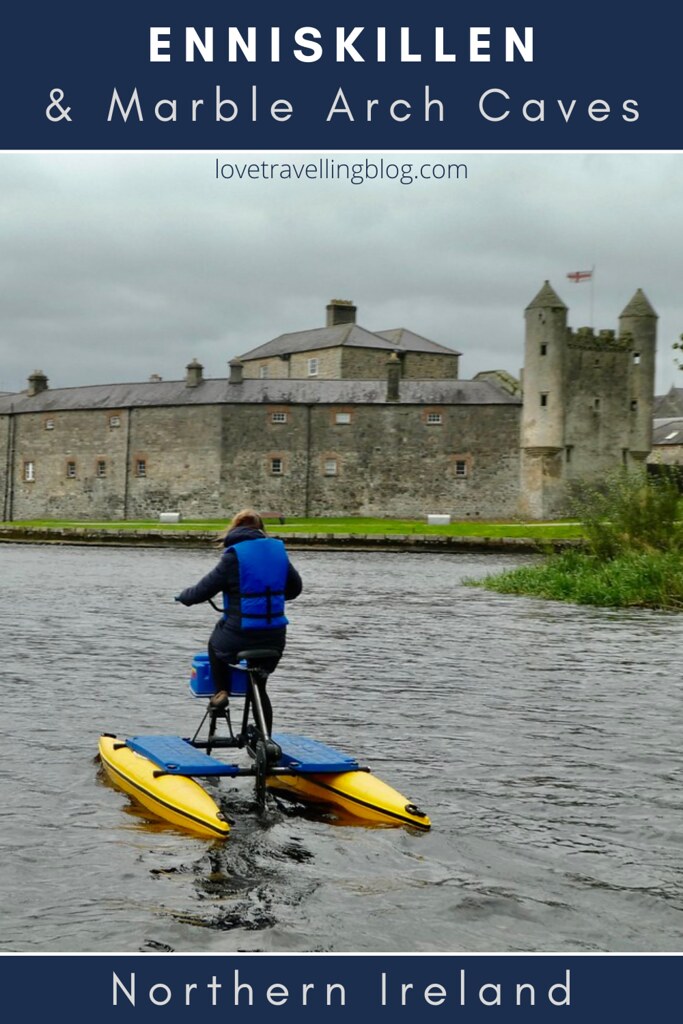