After the disappointment of last year’s show having to be cancelled due to the pandemic I was excited to be returning to Harrogate this summer.  The Great Yorkshire Show is one of the largest agricultural shows in the country and a wonderful showcase of rural life.

Organising an event of this size to make it COVID safe was a massive challenge but the organisers pulled it off brilliantly using as much outdoor space as possible.  The show usually runs over three days attracting 135,000 visitors but for the first time in it’s history this year it was extended to four.  Tickets were limited to 26,000 each day and available by pre-booking only.  These sold out very quickly for all four days allowing 104,000 visitors to enjoy the show.

Directions to the showground are signposted from the outskirts of Harrogate with free car parks surrounding each of the entrance gates.  This year the show was open between 8.00 a.m. and 6.00 p.m. daily so we got up early to make the most of our time there and to avoid getting stuck in a lengthy traffic jam.  For visitors using public transport, a free shuttle bus operates from outside Harrogate railway station.  I travelled by train on one of the days and used this option which worked really well.  There seemed to be a lengthy queue at 8.45 a.m. at the bus stop but as one double decker filled up, another bus arrived and we were soon happily on our way.

The showground covers a whopping 250 acre grassland site with numerous permanent exhibition halls and pavilions that can be used for smaller events throughout the year.  At its heart is the grandstand and main ring where a full programme of activities take place each day.

The main ring stages several of the country’s top show jumping events with winners going forward to the Horse of the Year Show in London.  I enjoy watching equestrian events on television but there is no comparison to actually being ringside and watching these events take place.  Army cadets sit on benches at strategic points ready to dash out to rebuild any of the fences that might have got knocked over in readiness for the next rider to start.

Visitors to the show can purchase grandstand tickets in advance which allow return access throughout the day.  To be COVID compliant this year though only a certain percentage of the seats were in use but as there are benches and sloping grassy banks to the other three sides, there’s always room to view the action.

In addition to show jumping, this year’s highlights also included the Atkinson Action Horses and soprano singer Lizzie Jones accompanied by the Yorkshire Volunteer Brass Band.  This band traces its history back to 1860 when it was founded as a Volunteer Corps in Leeds.  Since then, the band has performed all over the U.K. and Europe so it was good to see them back at the show.

The Atkinson Action Horses performed on each of the four days demonstrating their impressive riding skills with a combination of stunts and tricks to a beautifully synchronised routine.  Ben’s horses have also appeared in episodes of the television dramas, All Creatures Great and Small, Poldark and Peaky Blinders.  I was sitting spellbound watching their dramatic performance on Day 2 when Ben suddenly dropped to one knee and proposed to his girlfriend Georgie Jackson in front of the crowds.  Georgie is a dressage instructor who was supporting his team performance for the first time at the show and said afterwards that she was blown away by the lovely surprise.

It was the first time that I’d seen a Scurry Driving competition.  The only thing I knew was that the verb ‘scurry’ means to move quickly and watching this fast paced sport in which a carriage and pair of ponies are driven around a course of cones, I now understand how it gets its name as it is fast and furious as well as great fun.

Wandering around the showground we watched a drystone wall building display.  These walls are commonplace around the edges of fields in Yorkshire and are held together without the need for mortar.  The structures are stable because of the traditional method used of carefully selecting stones that fit together.  It’s a dying art but one which will hopefully continue.  This year there wasn’t any pole climbing taking place but a new woodland trail and forestry demonstrations with displays of woodcraft were going ahead instead.

Moving on to farm machinery, on display were tractors of every shape and size, cultivators, hay balers, milking machines and, in fact everything agricultural.  Normally you can climb on board the cabs which must be every young child’s dream but sadly this was off limits this year.  To make up for the disappointment though, we were able to take a look at the world’s biggest and most technologically advanced combine harvester, a giant of a machine and very impressive even to non-farmers like ourselves.

Animals play a big part in the show annually and this year the society were inundated with entries in all classes following the cancellation of last year’s event.  A staggering 8,500 of the finest animals in the country competed over the four days with judging for dairy champions to commercial beef taking place in the cattle rings.

It’s even longer since I’ve been able to view pigs as all pig classes were cancelled in 2019 following suspicion of a case of swine dysentery in a pig at another country show.  Laboratory samples returned negative on the opening morning of the Yorkshire Show but this was of course too late to arrange for their safe return.  In the pig ring we watched one of the judges take a careful look at the competition entries for a particular class where the British Saddleback with its easily identifiable striped back was judged best.

Elsewhere we inspected many different varieties of goats and observed one standing patiently having finishing touches made in preparation for showing in the goat ring.

In other sections of the showground we watched sheep shearing, demonstrating how a sheep’s wool can be removed in one piece.  It was sad to learn that the wool from a British sheep is valued at a lowly 25p now, far less than the cost of shearing an individual sheep to keep the animals cool in summer and tick free.

For family entertainment, The Sheep Show offered a light-hearted take on sheep farming.  This 30 minute live show presented out of the side of a large truck, introduces the audience to nine different breeds of sheep, each with their own story to tell.  There’s a shearing display and the presenter even gets his sheep dancing to music.  We found it to be great fun and educational too!

I haven’t mentioned food yet, but British food plays a significant part in the show.  Even in COVID times, there were samples galore in the vast food hall and from both the Morrison’s and ASDA supermarket stands.  We feasted on generous slices of pork pie, cheese, sausage, strawberries and even chocolate eclairs.

I’d also like to sing the praises of the Ladies in Pigs, an organisation which aims to inspire people to use only the best British Red Tractor pork and pork products in their cooking.  On their stand we sampled more freshly cooked sausage and a slice of smoky bacon and fruity seeded flapjack which were both delicious.  I was handed a copy of one their recipe booklets which I looked at after returning home and was really impressed as all the recipes are easy to follow and mainly contain store cupboard items encouraging me to give them a try.

The plant, flower and vegetable displays were all outdoors for the first time this year and with wall-to-wall sunshine, this worked very well and even on the final day there appeared to be little evidence of wilting in the exceptionally warm weather.  The plants appeared more natural outdoors so perhaps this might continue next year although it is quite weather dependent.

Moving on from food and flowers there were numerous stands offering alcoholic samples from beer to gin.  Being a gin lover I couldn’t resist the refreshing samples of gin and tonic offered – it was just as well that I wasn’t the one driving.

We returned to the main ring later in the afternoon to watch the Pony Club Games.  Here we watched as teams battled it out in both the Junior and Senior classes with children aged between 8 and 16.  Teams of up to six riders took part in a series of races that involved a mix of turns, handovers, vaulting, galloping around obstacles, running over stepping stones and dropping objects into buckets.  It was such a fun way to end our final day at the show and I couldn’t believe how agile even the youngest competitors were at clambering onto their ponies at top speed.

I hope you have enjoyed my tour of The Great Yorkshire Show 2021.  It’s been a real celebration of the countryside, food and agriculture offering something for the entire family.  If I may have inspired you to experience it for yourself then it will be taking place in Harrogate, North Yorkshire between 12th – 14th July next year. 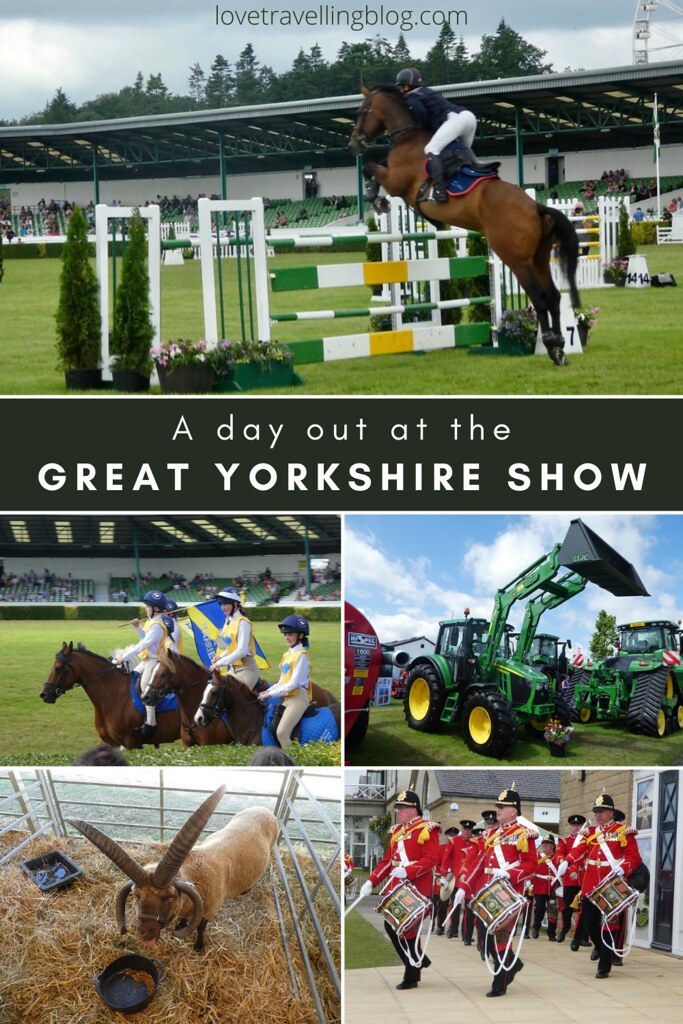