Ilkley is a spa town and popular tourist destination in West Yorkshire.  With its backdrop of the famous Ilkley Moor and its high class shopping on The Grove it’s a lovely place to visit.  The town is well served by public transport with rail connections between both Leeds and Bradford on the Wharfedale Line.  Buses depart from next to the station with frequent services to Otley, Skipton and Harrogate.  The town’s central pay and display car park is close by with unrestricted parking being available on roads slightly further away or across the river.

We’d planned a three mile walk taking us across the river to Middleton and out into open countryside before looping back into town.  Our starting point was from Station Plaza near the junction with Brook Street which leads down towards the river.  Just off here is The Grove, Ilkley’s beautiful tree lined shopping street.

On reaching the traffic lights we crossed the main road by All Saint’s parish church.  This fine example of medieval Gothic style architecture was restored and extended during the 1860’s as the town’s popularity as a visitor attraction grew.

Our walk continued a short distance along New Brook Street until we reached a footpath leading down into the Riverside Gardens.  This large expanse of lawns slopes down to the River Wharfe and is a pleasant place for a stroll or to sit on a bench overlooking the river.

A few steps further and the old bridge had come into sight, it’s just past the Riverside pub, a popular meeting place with its large terrace from where you can enjoy a drink whilst watching ducks paddling along the river.

llkley’s old packhorse bridge dates back to 1675 and was the only river crossing in the town until the New Brook Street bridge was built in Victorian times.  The bridge was constructed with large stone arches as the river is susceptible to flooding and these allow water to flow through even when the river is in full flood.  The bridge no longer takes traffic and nowadays is only accessible to pedestrians and cyclists.

We climbed the short flight of stone steps up onto the bridge to cross the River Wharfe.  If you might be feeling energetic, the bridge marks the starting point for the Dalesway, an 80 mile long distance walking route leading to Bowness-on-Windermere in the Lake District.

On reaching the far bank we then followed Nesfield Road in a westward direction continuing parallel with the river until we reached Ilkley Golf Club.  Here we paused awhile to watch several golfers enjoying one of their first rounds of golf following the easing of restrictions.

The club is one of the finest in the north of England with its picturesque setting, gently sloped course and manicured greens beside the meandering river.  It’s not only scenic but also a challenging course attracting visitors from far and wide.

As we continued along the tree lined lane we viewed more golf activity on both sides of the road and after passing the driving range at a bend in the road, our walk took us uphill until we reached a fingerpost indicating a public right of way through a freshly painted farm gate.  A short distance along the driveway the footpath veers off to the right with a hedge to one side and a low wooden fence to the other.

The route continues along the edge of open meadows rising gently upwards before passing over several wooden and stone stiles.  As we gained more height we enjoyed far reaching views looking back across the valley to Rombalds Moor.

After our little breather we set off again passing a traditional Dales stone farmhouse before finding another stile to clamber over in the presence of a barking dog from a neighbouring farm.

We’d now reached Hardings Lane, a little used minor road passing through open countryside.  Along there, in the sunshine, it really did feel as if Spring had sprung with clumps of bright yellow daffodils along the hedgerows and new born lambs frolicking in the fields.

Continuing further, the lane turns into a bridleway with a pretty row of stone cottages on one side and the tiniest of bridges over a small stream on the other.  After approximately half a mile we turned down a steep sloping lane passing the entrance gates to Myddleton Lodge and Grange.

This impressive building dating from 1550 was the home and hunting lodge of the Middleton family who were ‘Lords of the Manor’ in Ilkley and of other estates in Yorkshire for many centuries.

In 1922 Myddleton Lodge became a monastery run by the Cross and Passion Fathers sustaining the Catholic faith and now operated by the Diocese of Leeds as a pastoral centre.  The Lodge isn’t visible from the entrance gates but can be seen from slightly further down the lane through a gap in the trees.

We then made our way down Langbar Road passing a footpath on our left leading into the Bluebell Woods which, as the name suggests, form an idyllic carpet of blue flowers from late April until mid-May.

As we approached the riverside we passed numerous attractive stone properties partially secluded by trees and it was not long before we had reached the old bridge and almost completed our looped walk.

After our pleasant afternoon walk we enjoyed sitting in the sunshine with refreshing drinks.  Our looped walk by the riverside and through the scenic Wharfedale countryside is suitable for the casual walker as the three mile loop is relatively easy and gently undulating. 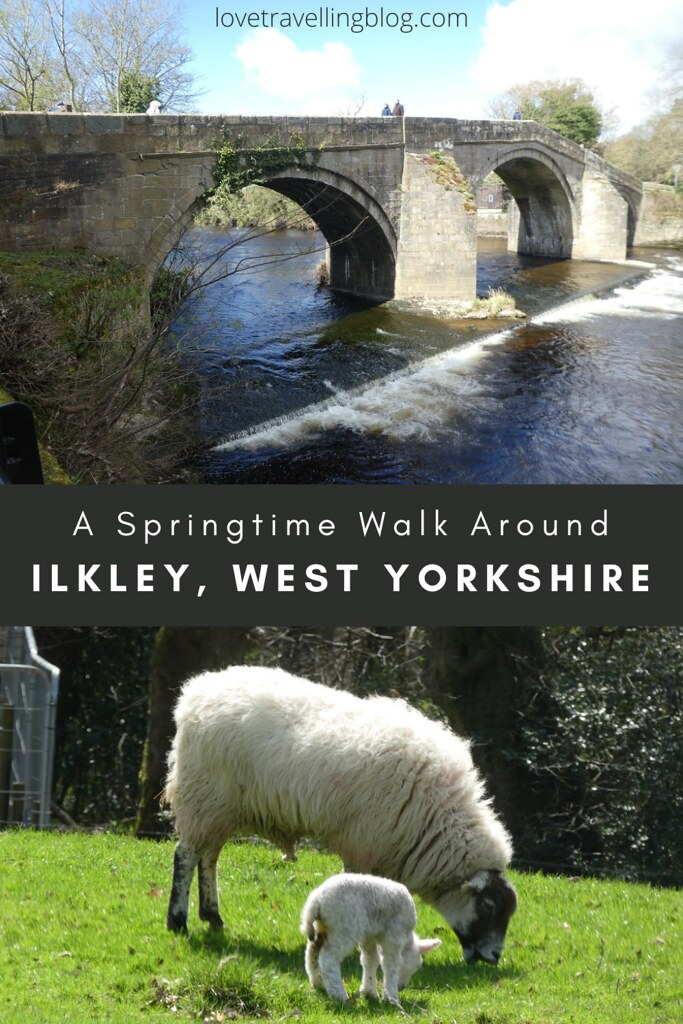