After a delicious breakfast at the Rock Hotel we were all set to go for another fun filled day exploring Gibraltar.  First on the agenda was something totally new to us, a morning of e-biking up to the top of Rock.  EBike Gibraltar are based at Ocean Village and from there one can take a three hour guided tour around the Upper Rock Nature Reserve or simply hire one of their e-bikes by the hour or half day to go at your own pace.

We met Stuart Hadley, the joint owner of the company at his shop on Imperial Ocean Plaza close to the cruise terminal.  He explained that the e-bikes are all premium Riese & Muller and are easy to operate as you just need to pedal to engage the motor.

After a quick demonstration and being fitted out with helmets and equipped with bottles of water, we were soon on our way.  If like us you’ve never ridden an e-bike before, you will be surprised how easy they are to use.

From Ocean Village we followed the road around to Catalan Bay with its picturesque coloured buildings surrounding the bay.  After a short photo stop we passed Sandy Bay and moved onto Europa Point with its Trinity House lighthouse which we had visited on our first day in the territory.

From there it was an uphill climb to the top of the Rock, some 420 metres above sea level but we were able to let the e-bike take the strain, requiring minimal effort on our part.  It was such an exhilarating experience taking in the beauty of the nature reserve and stopping wherever we wished.

We paused to take a look at one of the Pillars of Hercules that guard the entrance to the Atlantic Ocean.  According to Greek mythology Hercules needed to undertake 12 tasks and whilst on his journey he needed to cross the Atlas Mountains.  Rather than climbing over them, legend has it that he used all his might to smash through them, bringing the Mediterranean Sea and Atlantic Ocean together. The Pillars of Hercules are the result of achieving this task with this one on the northern side and the other to the south on the African side of the Strait at Jebel Musa in Morocco.

Our Greek mythology lesson over it was time to continue on our tour of the Rock.  We passed numerous Barbary macaques sitting on walls and crossing our path on the way but as the e-bikes are silent and kind to the environment they just ignored us.

Our next stop was at O’Hara’s Battery at the very top of the Rock, a lookout point with spectacular views across the strait, taking in three countries and two continents.

Back on the bikes we cycled along the length of the Rock before descending back into town at the Moorish Castle, a distance of approximately 12 miles.  The e-bikes are suitable for anyone over the age of 12 who can ride a bike and with the option of utilising as much or as little power assistance as required, an adventurous activity for all abilities.

Our cycling adventure over, we popped into the Gibraltar Market which lies on the edge of Grand Casemates Square.  This traditional market hall stocks fresh produce and local delicacies from local vendors, a good place to pick up a treat.  Opening hours: Mon-Sat 8.00-14.00.

Wandering through the old city walls into Grand Casemates Square we were just in time to watch the Ceremony of the Keys re-enactment ceremony.

The official Ceremony of the Keys is performed once a year by the Royal Gibraltar Regiment and re-enacted each Saturday at midday by the Gibraltar Re-Enactment Association.  A group of volunteers re-enact the locking of the gates to the old town before parading down Main Street in their bright red uniforms.

We followed the parade part of the way along Main Street on our way to the Kasbar Vegan Restaurant on Castle Street.  We’re neither vegans nor vegetarians but had heard such glowing reports about the Kasbar, serving 100% plant based food that we simply had to try it.

The setting is beautiful and has a cosy feel with its vaulted ceilings and exposed brickwork.  Staff are friendly and welcoming and being our first visit to a vegan restaurant, helped with suggestions from the daily changing menu.

Simon opted for their signature Jackfruit Burger, served with caramelised onions, vegan cheese and a side of chips whilst I selected a mezzo bowl featuring another of the Kasbar’s culinary delights – the kasball.  These falafel balls contain beets, making them moist and even more nutritious.  Talking about beets, another first for me was my beetroot latte which was divine.

The verdict on our vegan lunch – a big thumbs up from both of us.  If you’re not a fan of vegetarian/ vegan food and think it’s all just soy beans and lentils, well think again.  The cuisine is so much more interesting and flavoursome than that if the Kasbar is anything to go by.

Leaving the Kasbar it was just a few minutes walk to Devil’s Gap Road, our next destination.  This street is also known as the Union Jack or Referendum Steps.  The steps were originally painted in 1967 to celebrate Gibraltar’s first sovereignty referendum.  The street is also the quickest route on foot from the centre of town up to the Upper Rock Nature Reserve.

More shopping followed along Main Street and in between the stores we came across this beautiful entrance to the Cathedral of St. Mary the Crowned.  The church is located on the site of the former main mosque in the centre of town, retaining its richly decorated Moorish traditional courtyard and exquisite tiling.

Before returning up the hill to our hotel we enjoyed glasses of beer sitting out in the warm sunshine on the terrace of a bar facing the Convent (Governor’s Residence) watching the world go by.

During the evening we set out again to board a cruise ship, which was to be another first for us!  Moored at Ocean Village is the Sunborn Gibraltar.  This seven deck, 465ft cruise ship doesn’t set sail but is in fact a five star super-yacht floating hotel.

Guests enter via a covered gangway with a red carpet leading to an opulent reception hall with a marble floor and a giant disco ball above the reception desk.  The hotel features 189 contemporary styled rooms and suites and as we’d arrived a little early for our dinner reservation we managed to take a sneak peek at a couple of them.  The stylish rooms are decorated in shades of cream and have either marina or sea views and sumptuous marble bathrooms.

We then took one of the high powered lifts up to the Barbary restaurant on the seventh floor, pausing to look out over the deck at the twinkling lights of Ocean Village and the marina below.

The spacious restaurant continues the Sunborn’s contemporary theme with cream leather sofas and matching chairs.  We were shown to our table where we accessed menus via a QR code on our phones.  Over glasses of wine we perused the fine dining inspired North African and Mediterranean menu, catering for all tastes.  It was so hard to decide what to have as we were tempted by everything on the menu.  Eventually, we made up our minds and whilst waiting for our starters enjoyed sharing a Mediterranean and Arabic bread basket with an harissa dipping sauce.

Our starters of lemon infused squid and drunken prawns were delicious.  For mains I opted for an aged beef fillet with garlic and coriander potatoes in a red wine jus which was served to perfection and so tender it just melted in my mouth.  Across the table, Simon was also in raptures with his yoghurt marinated chicken breast served on a bed of couscous.  After two delicious courses, it was impossible to resist a dessert so we completed our fine dining experience with a raspberry cheesecake and a vegan Elton Mess, sampling a little of each other’s as they were both delectable.

Our dinner had been a delight, the service attentive but unhurried and each of the dishes creatively presented.  Definitely an evening to remember with cuisine that I’m certain would please the most discerning of diners.

A weekend in Barcelona 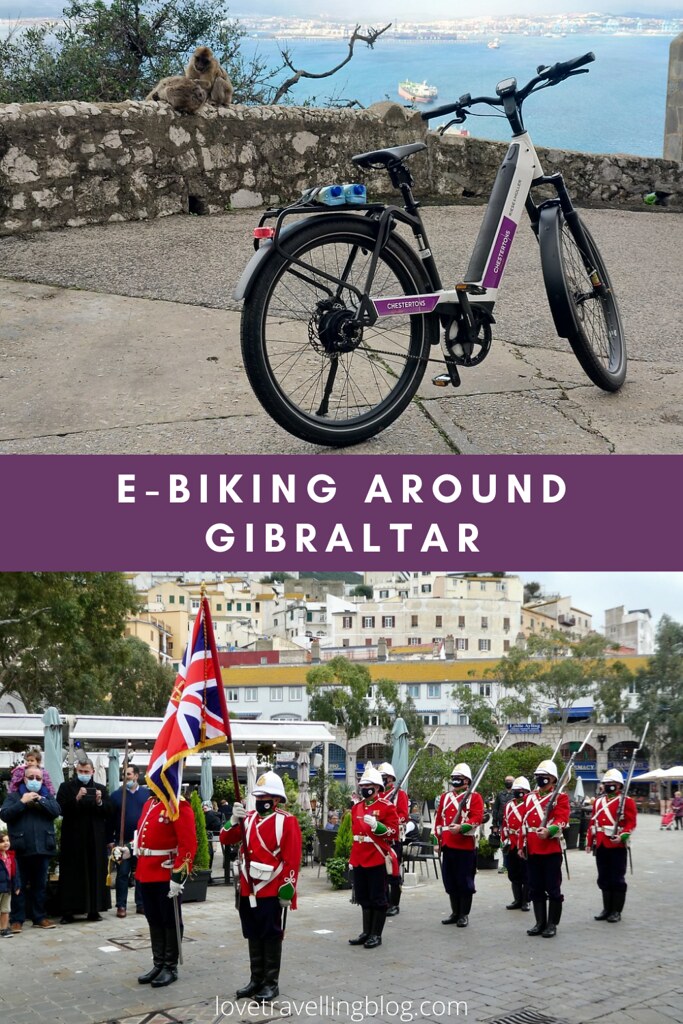 61 thoughts on “Day 5. E-Biking around Gibraltar”