We woke to another bright morning and after starting the day with my favourite bircher muesli, fresh fruit and pastries at the lovely Harrison Hotel we were soon ready to walk into the city centre.

Belfast is a great walking city as it’s relatively flat and quite compact.  It only takes about 20 minutes to reach the City Hall from the Queen’s Quarter but buses constantly pass along Malone Road taking only a few minutes if you prefer not to walk.

The Lanyon building of Queen’s University looked beautiful in the morning sunshine as we passed by on our now familiar route into the city centre.  It was a Saturday morning and we had decided to start the day with a spot of shopping along the pedestrianised Donegall Place.

Along this broad avenue we found the usual high street names and the wonderful Queen’s Arcade that leads to Fountain Street.  This Victorian arcade is an absolute gem creating a refined shopping experience with its high-end and independent small shops.

From there, we had a look in the swish Victoria Square, Belfast’s premier shopping and leisure centre which is home to designer and luxury brands, fashion and beauty.  The centre is flooded with natural light and features a large glass dome from where visitors can enjoy panoramic views across the city.  Unfortunately this viewing terrace was inaccessible due to the pandemic but it’s somewhere we can look forward to exploring on a future visit to the city.

Leaving the shopping centre, we admired the bright yellow Jaffe Fountain which stands outside its entrance.  This beautiful fountain began life here in the 1870’s but was later moved to the Botanic Gardens.  On completion of the new shopping centre it was decided to return it to its original position so that more people would be able to take pleasure in seeing it.

On our way to St. George’s Market we stopped to take a look at the Albert Memorial Clock which has dominated Queen’s Square since 1869.  It’s Belfast’s answer to the Leaning Tower of Pisa, with its lean caused by substandard construction on reclaimed land from the river.  Built in Gothic style, it stands 141 ft (43m) high.

Don’t miss taking a look at the markets magnificent clock with its weights, cogs, chains and bell visible through its glass case.  The clock was manufactured in 1822 but had been lost for years.  It was eventually discovered in the City Hall cellars and after being painstakingly repaired and restored it takes pride of place on one wall of the market hall.

There are lots of tempting street food stalls and we couldn’t resist sampling one of the legendary Belfast baps (a huge bread roll filled with your choice of egg, bacon, sausage and more).  They are so big that we actually shared one and I have to say it was very tasty.  There’s usually live music so the market is a great place to soak up the atmosphere, do some shopping and grab a bite to eat.

Just a five minute walk from the market hall is Belfast Lanyon Place Station so we headed off there to catch a train to Cultra, 7 miles (11 km) east of Belfast.  Standard off peak return tickets cost just £3.80 for the 20 minute journey.  As we were buying our tickets, the clerk informed us that the next train was departing in two minutes so we dashed around to the platform just in time as the train was approaching.

The road transport gallery boasts a large collection of vehicles ranging from bicycles and motorcycles to trams, buses and cars.  The tram gallery is lined with authentic shop fronts and cobbled streets creating a feeling of nostalgia.  One of the trams on display was horse drawn and another Victorian double decker had the destination Malone Road displaying over the cab which was fun to see as this was the road that our hotel was located on.

There’s even a Titanic exhibition documenting the construction, voyage and eventual sinking of the ill fated vessel.  The ship has long been associated with Northern Ireland as it was built in the Harland and Wolff shipyards just a few miles away.

The museum is located in a parkland setting with several exhibits displayed in the grounds.  It was then a ten minute uphill walk to the Ulster Folk Museum set amid the rolling hills of the Antrim countryside.

The museum is centred around a small Ulster town called Ballycultra where numerous buildings and homes have been moved from various parts of Ireland and rebuilt in the grounds of the museum brick by brick.

There are two farms, numerous cottages, shops, a blacksmith’s forge, a bank and church.  It’s possible to go inside many of the buildings where visitors can watch activities taking place such as printing, craft demonstrations and needlework by museum staff dressed in traditional costumes.

We spent a couple of hours looking around the Folk Museum but could have happily spent much longer wandering around as there are so many interesting things to see and do.  Before leaving we did find time to stop for a pot of tea in the lovely Victorian tea rooms adjacent to the old cinema.

After returning to the hotel late afternoon by train we had a short rest before going out for dinner to The Shed Bistro on Ormeau Road.  The restaurant looked so inviting in the twilight that I knew we were in for a lovely evening even before we had stepped through its doors.

The Shed Bistro features an open kitchen and offers casual dining at its best along with friendly service.  We selected from the Dine Out menu available Thursday-Saturday between 12.00 and 6.45 p.m.  This was excellent value with starters at £5 and mains £13.  Both our starters of mussels with chorizo and char siu pork with a pineapple salsa were excellent and beautifully presented.

For mains, I opted for the delicious 6oz flat iron crostini with skinny fries and pepper sauce whilst across the table my son was in seventh heaven with his Glenarm Shorthorn burger, smoked applewood pickle and chunky chips.  The Shed is a great little neighbourhood restaurant and only a short walk or quick taxi ride from the city centre.  It won both the Northern Ireland Bistro and Casual Dining of the Year awards in 2019 which on the evidence of our visit were both richly deserved.

We then wandered back to our hotel after another busy day enjoying ourselves in Belfast. 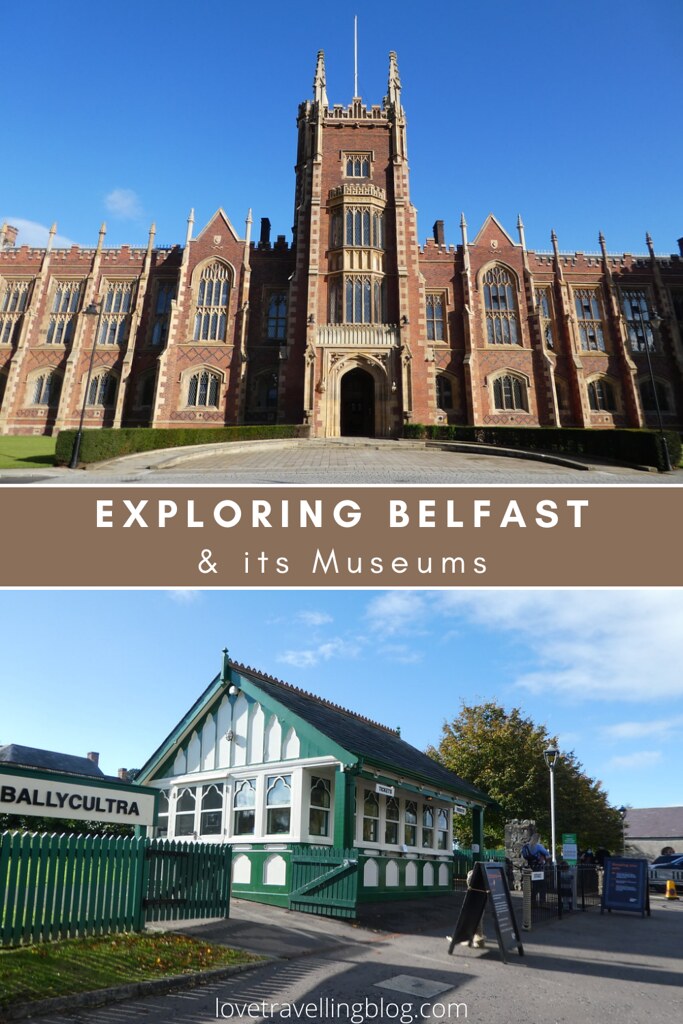 26 thoughts on “Day 3. Belfast and its Museums”