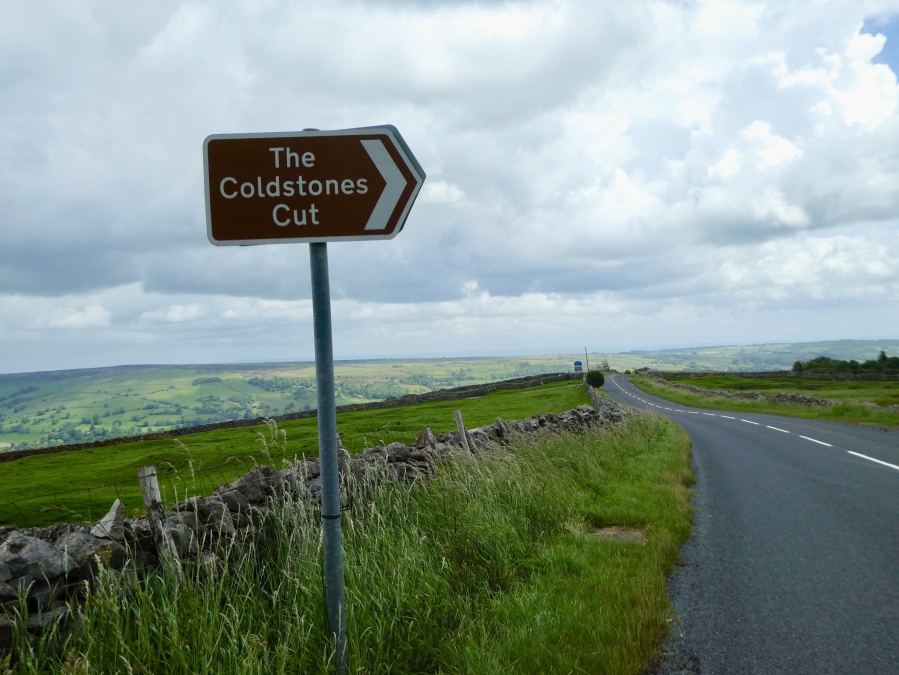 The Coldstones Cut is said to be Yorkshire’s biggest and highest piece of public art work.  It was created by Andrew Sabin and overlooks the Coldstones quarry on Greenhow Hill just outside Pateley Bridge in North Yorkshire.

Perched at a height of just over 500 metres above sea level it can be freely explored by visitors and has been open since September 2010.  The sculpture is formed of platforms at various levels for viewing both the spectacular quarry and the surrounding landscape.

It’s located two miles west of Pateley Bridge in North Yorkshire on the B6265 with the Toft Gate Lime Kiln car park being clearly signposted from the road (parking free).

The skies had become leaden as we approached but it remained fine. It was only my husband who had come prepared with a coat whilst my son and I were dressed for sunny weather, so we hoped for the best.

On the edge of the car park there are a couple of picnic benches and an information board including a map about the installation.  A signpost pointed the way to the sculpture that was up a steep track, taking us approximately ten minutes to reach the summit.  The steep gravel track is manageable with care for wheelchairs and prams and accessing the various levels of the the sculpture itself is step free.

The location is exposed to the elements and the weather can be harsh and unpredictable just as it was on our visit when it began raining heavily and became so gusty that it became increasingly difficult to keep my camera still and to protect the lens from spots of rain.

As we approached the monumental stonework the pathway led us into a contemporary streetscape flanked by large stone walls which, as well as being interesting, offered us some protection from the howling gale.  A dome embedded into the ground indicated to visitors that there were three options to explore.

We chose to go straight ahead and came to a large viewing terrace overlooking the Coldstones quarry.  Situated on Greenhow Hill, it is one of the highest quarries in England but despite its huge size it used to be hidden from view.  Our visit was at the weekend but I recommend visiting on a weekday when it’s possible to view the limestone quarrying operation with trucks moving around and occasional blasting.

We then retraced our steps to the domed area and walked up the spiral path to one of the viewing towers.  It was fascinating as the high stone walls on either side of the path appeared to slowly decrease in size as we spiralled round and round gradually exposing more of the landscape.

There were spectacular views over Nidderdale and the moody skies appeared to make the moors look more atmospheric than ever.  Along the tops of the walls steel distance markers have been installed which I found to be extremely interesting as they included places near and far from Skipton which is just down the road to the likes of Cape Town and Alice Springs.

On our way back down we paused to admire an oversized yellow bicycle, a fitting tribute to the Tour de France Grand Depart in 2014 which passed through the challenging terrain of Nidderdale.

Nearing the car park we followed a short side trail along to the Toft Gate Lime Kiln.  By means of a series of information boards we learnt that the kiln had been constructed in the 1860’s and it was interesting to explore a piece of Nidderdale’s industrial heritage.

Returning to the car my son and I were looking bedraggled but it didn’t matter as we’d really enjoyed our visit.  We hadn’t been sure what to expect but we’d very much enjoyed viewing the unusual sculpture in such a dramatic setting.  Irritatingly just as we were setting off the rain ceased and some fluffy white clouds started to appear.

As we were only two miles from the charming small market town of Pateley Bridge we decided to take a look around there too.  We easily found a parking space near the old stone bridge and then took a short stroll through the riverside gardens with a bowling green, children’s playground and a handsome bandstand.  On a normal summer weekend we might have expected to hear a band playing but alas not in these strange times.

After crossing over the River Nidd we explored the small shops along the town’s steep high street.  Several shops were open including an award winning butchers and the Guinness Book of Records accredited world’s oldest sweet shop where I couldn’t resist popping in.

The interior still retains its traditional charm with shelves containing glass jars filled with old fashioned sweets such as humbugs, wild mice and torpedoes.  The jar of torpedoes brought back memories of my childhood as my piano teacher had a jar of them in her hallway and always offered me one as I was leaving.  I never actually cared for those sweets which had a crunchy multi coloured shell and a liquorice centre but was either too polite or too scared to refuse, probably a mixture of the two.

Leading off the High Street are several little courtyards where we found inviting little cafes and gift shops tucked away so it’s worth exploring if you decide to visit, Pateley. Bridge was a proud winner of the Great British High Street of the year awards winning the village category in 2016.

Another lasting reminder of the Grand Départ passing through Nidderdale is this artwork on the gable end of a building along the high street.  Combined with the Coldstones Cut, Pateley Bridge makes a pleasant day out and yet another delightful beauty spot that we’ll enjoy revisiting sometime.