The Moscow metro is one of the most beautiful in the world.  It was created as a showcase for the Soviet Union, and serves as a living museum with its stations adorned with mosaics, marble statues and stained glass that document the story of the Communist state.  There are 12 lines and 223 stations on the network and I’ve listed below a selection of my favourites, some of which you might like to take a look at whilst visiting Moscow.  Navigating the metro is easy with announcements now also made in English.  A male voice can be heard on journeys towards the city centre whilst female voices are used on travel out of the city centre.  Likewise, on the circle line, male announcements can be heard whilst travelling in a clockwise direction and female announcements anti-clockwise.

This beautiful station was constructed as a gateway to Moscow due to its location beneath its three busiest rail terminals.  The station represents the peak of the Stalinist empire style with its elegant chandeliers, marble arches and mosaics.  Eight mosaic panels depict Russian warriors, commanders and of the revolutionary leader Vladimir Lenin.

This station is adjacent to Gorky Park and its mosaics depict leisure activities of the Soviet people including those played in the nearby park such as flying a model plane and skating.

The design and theme of this lavish station reflects the nearby Botanical Gardens of Moscow State University.  The station opened in 1952 and features white pillars decorated with pretty floral friezes, grand chandeliers and a grey chequered floor.

This white marble station features elaborate artwork frescoes and mosaics depicting life in the Ukraine and of soldiers during the October Revolution and Civil War.  It was built as a monument to Ukraine’s contribution to the creation of Soviet Russia.

Ploshchad Revolyutsii lies close to Red Square and is devoted to the Bolshevik Revolution of 1917.  There are 72 life size bronze statues all placed in alcoves along the platform and these depict soldiers, sailors, workers, peasants and animals.  It’s said to be good luck to rub the dog’s nose and one can see that it has been stroked countless times as it is now very shiny.

This station was built by Leonid Polyakov the architect who designed one of the seven Stalinist skyscrapers.  Its granite slab floor creates a carpet like pattern and its pillars are adorned with ceramic bouquets and chandeliers of gilded bronze.

This striking station celebrates the great victories of the Russian people and is the deepest on the Moscow metro and the 4th deepest in the world.  It contains the longest set of escalators in Europe with each one 126m (413 ft).  The platforms are faced in red and grey marble with distinctive large mosaics at the end of the platforms.

This station opened in 1950 and is named after Taganka Square.  It has a war theme depicting images of Russia’s famous battles.  Its immense pillars are made from light coloured marble and decorated with details of ships, knights and warriors.

This station has 32 stained glass panels giving it the appearance of a vast church.  Six of the panels depict people with different professions including musicians and architects whilst the remaining 26 panels contain intricate geometric patterns and stars. 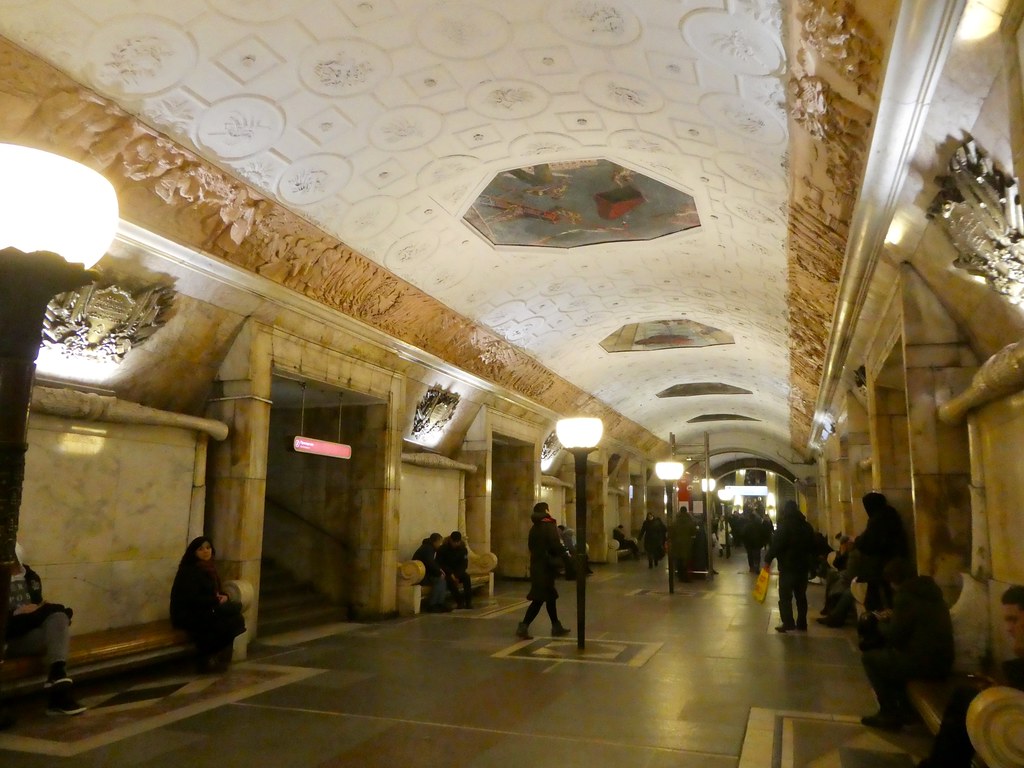 This station honours Russian war heroes.  Its central hallway decorations include octagonal ceiling mosaics on the theme of wartime, depicting the Red Army in combat.

One of Moscow’s newest stations, having only been opened since 2008.  Although new, it’s still strikingly beautiful with its metal trees, branches and leaves adorning the platforms.  It has a light and airy feel and I particularly liked its wooden benches with their flower inspired trellises between the seats.

This station is located close to the Moscow Circus and its proximity is reflected in the grey stained glass above the stairs featuring images of clowns.  As with Novoslobodskaya there are stained glass panes but at this station they are much smaller.

This station is dedicated to aviation designs with a large sculpture at the end of the station hall of Icarus.  The ceiling is unusual as it consists of small golden anodised pyramids.

This station leads into the vast Exhibition of Achievement of the National Economy and is faced in white marble with green painted archways.

The main focus of this station relates to sporting activities.  The station is named after the Dinamo stadium outside its entrance, since re-named the VTB Arena.  Its platforms are are decorated with porcelain medallions depicting sports and competitions.

This station is unusual in that it is built over a bridge crossing the Moskva River.  Its large platform is used for temporary exhibitions of fashion, porcelain, art work and dolls.

This station features art-deco stainless steel columns and was used as a bomb shelter during the Second World War.

If you have enjoyed reading this post, you may also be interested in reading more about my visit to Moscow.