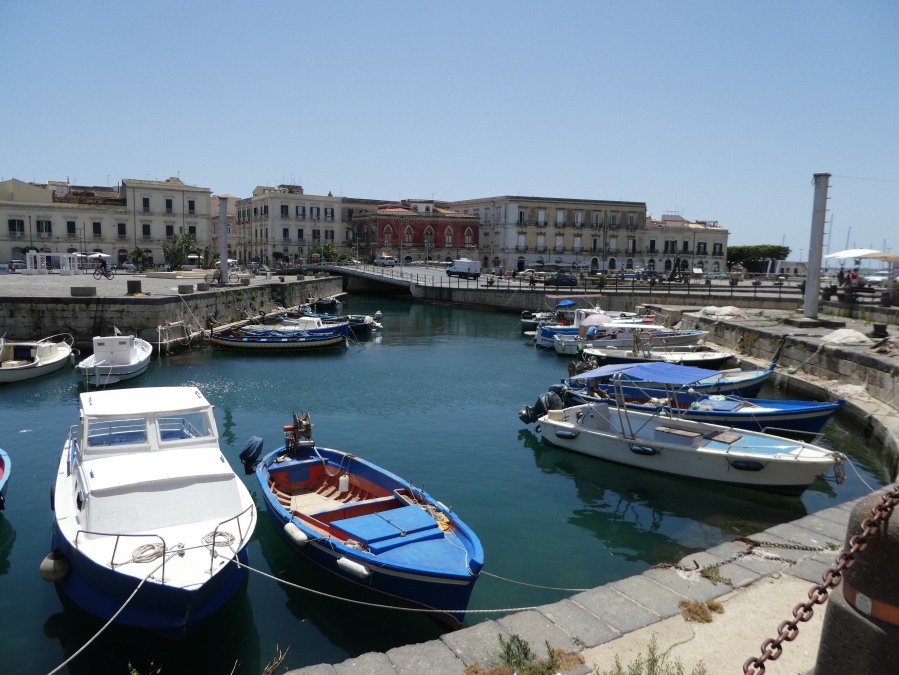 It was back to the railway station again after breakfast for a train from Catania to Syracuse. Return tickets cost €14.50 return and are valid on any regional train services. We’d decided to take the 10.30 a.m. train and discovered that this was to be replaced by a bus due to weekend track maintenance. After returning from Taormina the previous day on a bus replacement it felt as if we were back in the U.K. where we have to endure so many rail related problems.

Waiting outside the station for our bus to appear I felt a tap on my shoulder and someone call my name. Turning around, it seemed incredible that standing behind me were two friends who used to live in the same small town as ourselves. We had not met for several years and had no idea that they were also visiting Sicily at the same time as ourselves so we exchanged a few words before boarding the bus. As this was a planned rail replacement service, we boarded a luxury coach with spacious seats and air conditioning. It was a smooth journey and sitting near the front, I enjoyed listening to the driver’s choice of radio station. Best of all, we arrived in Syracuse ten minutes ahead of schedule at 11.50 a.m. and after spending a few minutes chatting to our friends from South Wales we set off on our way to Ponte Umbertino, one of three bridges connecting Syracuse to its historical centre on the small island of Ortigia.

It was an easy 20 minute stroll to the island along Corso Umberto which is one of the main thoroughfares in Syracuse. Crossing the bridge was an absolute delight peering down at the crystal clear azure water where we spotted crabs and fish just below the surface.

Stepping onto the island we came first to the Piazza Pancalli, with the ruins of the Greek Temple of Apollo to one side. The ruins are enclosed by railings and although they cannot be explored, one can admire them from the railings. These ruins date from the 6th century BC and are in remarkable condition for their age despite having lost most of their Doric columns, the excavation gives an impression of the imposing size of the temple.

On the opposite side of the piazza lies the street market and we enjoyed a stroll beneath the colourful canopies enjoying the sights and sounds of the bustling stalls where all manner of local produce was on offer.

We were then ready for a spot of lunch and as Ortigia has literally dozens of cafes it wasn’t difficult to find the ideal place to sit and watch the world go by. We weren’t very hungry so opted for Arancini balls, the popular Sicilian snack we had seen everywhere.

The balls were quite large with a Bolognese meat sauce and stuffed rice filling, coated in breadcrumbs and deep fried. I have to say that I found them to be quite heavy and perhaps not the best choice for lunch on a hot day but I always like to try local specialities wherever possible.

Next on our list was a visit to Ortigia’s main square, the Piazza Duomo which we accessed from Via Cavour, a lengthy, narrow street lined with cafes, bars and gift shops. The cathedral was once the Greek Temple of Athena and it still retains a giant sized gold statue of the goddess on its roof. There is no charge to visit the cathedral which has a magnificent interior and shouldn’t be missed.

The elliptical Piazza Duomo is a large open space surrounded by impressive architecture and several attractive but rather expensive restaurants. There is a path leading from the piazza towards the western shore where we found Fonte Aretusa, a fresh water spring whose history can be traced back to the early Greeks. The well is surrounded by high stone walls and is a focal point of this part of the island.

From the well we had a gentle stroll along the seafront, slowly making our way around the perimeter of the small island passing the marina where expensive super-yachts were moored alongside more humble sailing boats. The island is so pretty with its breathtaking views both inland and along the coast.

We returned to Syracuse across the Ponte Umbertino and explored the central district before returning to the station. All the action and most of the main sights are to be found in the historical centre of Ortigia but we were eager to take a look at the Sanctuario Madonna delle Lacrime, a huge modern church with a 102m high spire that seemed to be visible from all parts of the city.

The vast, circular church is said to resemble a giant teardrop but my initial impression was more of a giant concrete tent. Entering the church I found its contemporary architecture to be very plain and minimalist but it’s certainly worth a look for its unusual design and sheer scale.

It was quite late by the time we returned to Catania after enjoying a splendid day out in Syracuse and along with Taormina is a definite ‘must see’ in this part of Sicily.