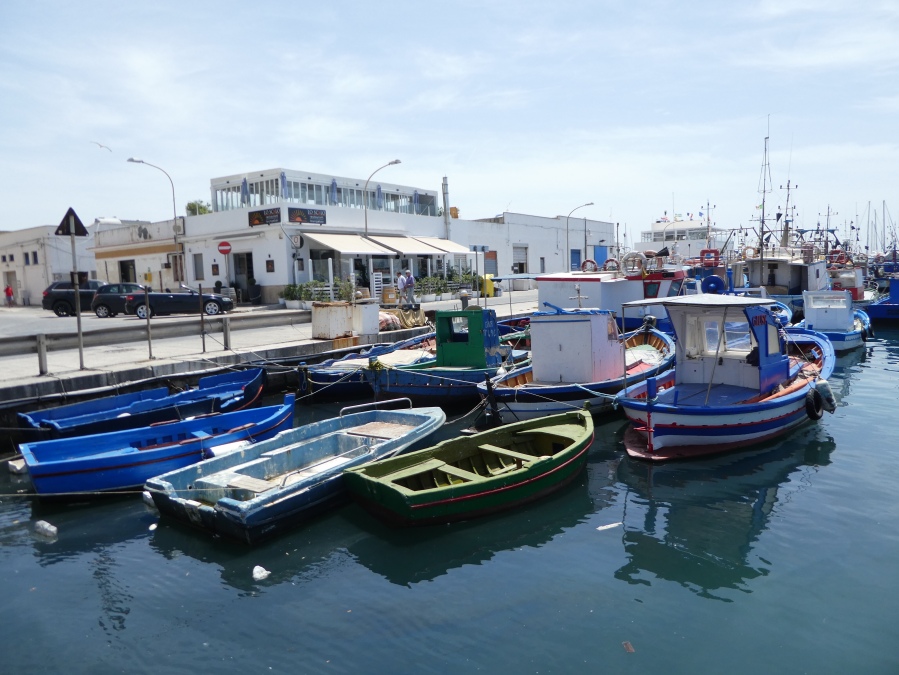 We woke to yet another hot, sunny morning and decided to spend the day in the port city of Trapani. Getting to Trapani from Palermo is by Segesta Express bus and this service departs from the left hand side of the railway station. Return tickets cost €14.10 each and do not need to be purchased in advance. Luxury coaches operate on this route and our 10.00 a.m. departure was less than 25% occupied. The journey takes 1 hour 55 minutes with the first 30 minutes of the journey being taken up with getting out of the city centre. After finally leaving Palermo behind, most of the route was along the Autostrada from where we had good views of the passing scenery.

Trapani is set on a low peninsula which curves out to sea in an attractive arc and is the main departure point for the Egadi Islands just a few miles off the coast. I would have loved to have taken a boat trip there but decided to save this for a future visit as there wasn’t really enough time on just a day trip.  On arrival in Trapani the bus makes several stops but I suggest alighting at the terminus near the port as from there it is only a short distance to the historic centre and the waterfront. Buses depart on the hour in both directions with the return bus stop being directly across the road from the terminus.

To get our bearings, we followed a sign to the tourist information office on Via Torrearsa from where we picked up a map. Just across this pedestrianised street we noticed an inviting cafe so we ordered some cups of coffee and spent a little while studying our map before setting off to explore.

Continuing along Via Torrearsa which is Trapani’s main thoroughfare, there are some beautiful distinctive Arab influenced buildings which have been constructed in honey coloured stone. The narrow road is dotted with designer stores, chic cafes and restaurants with a collection of tempting leather goods shops offering some gorgeous shoes and bags. The city oozes sophistication and charm as its historic centre has been restored to its former glory in recent years and although compact it is a delight to wander around. Trapani’s maze of narrow streets have a tranquil, laid back feel being a complete contrast from the island’s capital, Palermo.

Just a few steps from the tourist office stands the Cathedral of San Lorenzo built over an earlier 14th century church. The huge cathedral has a baroque facade and stuccoed interior which has been modified several times resulting in its 18th century appearance, Preparations for a forthcoming wedding were taking place with a large florist’s van parked outside unloading lavish floral displays to adorn the altar and the end of each pew.

Our walk continued along the elegant cobblestone streets lined with tall buildings and ornate wrought iron balconies dating from the latter medieval period with many of its historic buildings designed in Baroque style. After a gentle stroll of around 20 minutes we reached the port which serves as the main departure point in western Sicily.

The marina juts out into the Tyrrhenian Sea and it was pleasant to take a stroll there before continuing along the waterfront. There seemed little or no activity around the harbour except for a few unoccupied fishing boats and trawlers, their nets strewn along the bank to dry. We noticed some stone steps which led up onto the old city walls and decided to climb up. Although it wasn’t very high, it was surprisingly breezy along the walls and this gave the sea a much duller appearance than the vibrant turquoise water over on the sheltered side of the peninsula.

Continuing, we came to the 17th century Torre Di Ligny watchtower which stands at the very tip of Trapani. It now houses a small museum and visitors are able to climb to its lookout point for some far reaching views on a clear day across to the Egadi Islands.

The small town boasts two main beaches, the Lido San Giulliano and the private beach of Lido Paradiso which seemed to offer more protection from the stiff breeze. Some people were having picnics and relaxing on the large rocks away from the sandy coves which also seemed a good idea.  All this walking had made us feel quite hungry and we chanced upon a delightful small trattoria with traditional red and white checked tablecloths where we tucked into bowls of freshly prepared pasta served with the local Trapenese pesto which is made using almonds rather than traditional pine nuts. It was a simple dish but tasted delicious accompanied with glasses of local beer.

To walk off our late lunch we took a stroll through Villa Marguerita, a very attractive public park which divides the old and new parts of the city. We welcomed the coolness from its large overhanging palm trees and its small pond was a shady oasis where we sat on a bench awhile enjoying the peace and quiet.

On our way back to the bus stop we paused to admire the town’s magnificent Art Nouveau Post Office alongside some Government buildings sharing the same square. If time would have permitted it would have been interesting to have visited the Salt Pans Museum. Trapani was the home of the ancient trade in salt with the Phoenicians beginning production on the salt fields with the extraction continuing to the present day. It was only recently that I had the pleasure of visiting the Lion Salt Works in Cheshire, UK which was surprisingly a very enjoyable and educational experience.

Gladly, our return coach departed on time and was again not very busy and we were soon fast asleep in our comfortable air conditioned seats, not waking until we approached Palermo after a lovely day out in Trapani.