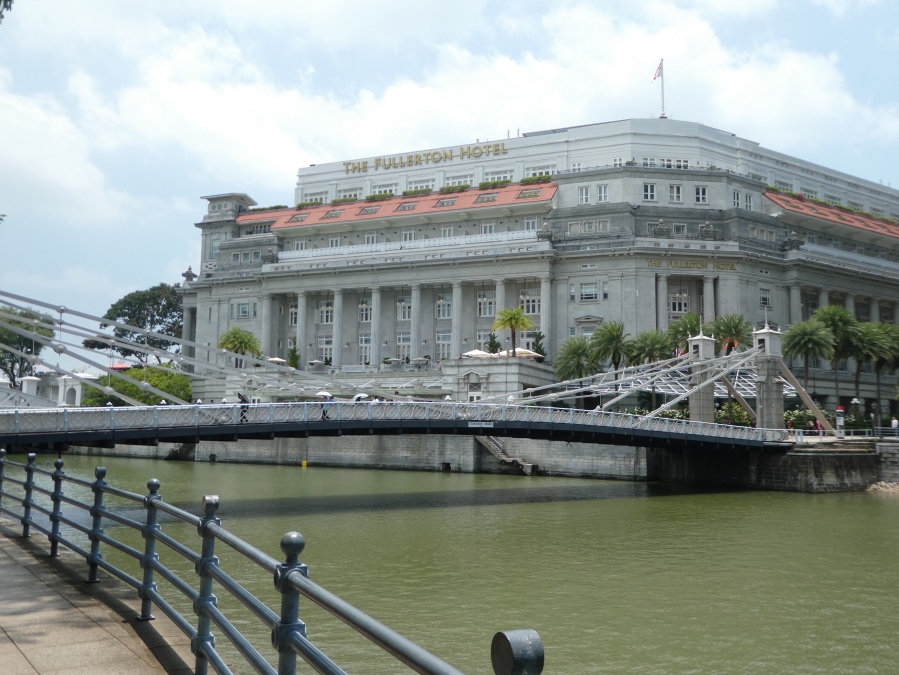 After a leisurely breakfast in the hotel’s Crystal Cafe where we were tempted into sampling many Asian delicacies, we took the MTR to City Hall station.  Just outside the metro station stands the anglican St. Andrew’s Cathedral so we started our day there as we were slightly early for our planned activity.

The cathedral was built in Gothic Rival style in 1837 to replace the first church which had been struck twice by lightning and was declared unsafe in 1852.  It’s free to look inside and a helpful member of the church team pointed out several interesting features to us.  These included the stained glass windows, three of which are dedicated to Singapore’s rich colonial history.

After concluding our visit to the cathedral we made our way over to the Fullerton Hotel which stands majestically at the mouth of the Singapore River.  On planning our visit, I had discovered that the Fullerton Hotel offer complimentary heritage tours of their hotel to both guests and non-guests interested in learning about its history.

We gathered in the hotel’s opulent lobby and along with seven other people received a warm welcome from our tour guide Bill Jee who explained that the tour would cover how the iconic building evolved from government offices to a post office before becoming a luxury hotel in 2001.

We were taken to the Heritage Gallery at one corner of the ground floor where numerous historical artefacts are displayed dating back as far as 1928 when the building was completed.  In this gallery we spotted a British red pillar box and our guide explained it was still in use today, together with a second one which stands proudly in the hotel bar.  Visitors can even send postcards from the hotel and stamp them with the hotel’s seal before posting, and we were invited to come back and do this at the end of the tour.

We learnt that the original Fullerton building opened in 1928 and was named after Sir Robert Fullerton, the British Governor of the Straits Settlement who served in the role between 1826-1830 after Singapore was founded by Sir Stamford Raffles in 1819.

The building was acknowledged as the most important post office in the east and boasted the largest post office counter in Asia at over 100 metres in length.  It was also the point from which all distances in Singapore were measured and Joe kindly took us outside the hotel to view the ‘Singapore mile zero’ circular plaque.

Returning indoors, more photographs and memorabilia relating to the period were brought to our attention when in 1862 the Fullerton building was also the site of the exclusively European, male only Singapore Club.  It was the location of government offices where the leaders of a fledgling Singapore made decisions that would steer the course of the nation from a poor third world country into a first world state.  During the Second World War the building was commandeered by the invading Japanese as offices for the military but they permitted the General Post Office to continue operating under strict censorship.

After enthralling us with the building’s history there was still more to come as we were escorted to the elegant lifts and taken to the hotel’s top floor.  From there we walked up two flights of steps (there was a small lift for those who needed it) onto the rooftop.  From this viewpoint we had spectacular views in one direction across to the Marina Bay Sands Hotel and the Clifford Pier.  To our left we could pick out the cathedral we had just visited and the towers and domes of other historic buildings in the civic district we had yet to explore.

A lighthouse for shipping once operated on this roof and now an al fresco bar taking its name has replaced it.  The bar opens at 5.30 p.m. each day and would be the perfect spot to sip cocktails whilst watching the sun set over the bay.  We chatted with an Italian mother and daughter and took the opportunity of taking photos of each other with the backdrop of these stunning views.

Our tour lasted 90 minutes and I couldn’t recommend it highly enough.  It is clearly evident that the tour guide, Bill Jee takes a great pride in the Fullerton Hotel and of the history of Singapore and conveys this in an articulate manner on his tours.  Further details of the complimentary tours can be found here. We pre-booked our tour before leaving home as tours are limited to a maximum of 20 people at any one time.

Being inspired by our splendid tour we continued our stroll through the Civic District. Directly outside the hotel stands the 19th century Cavenagh Bridge which spans the Singapore River.  Our eyes were drawn to an old metal police notice prohibiting the passage of cattle and horses due to weight restrictions.  We crossed the bridge hoping that we would not be too heavy and make it across safely!

Across the river we admired a statue of Singapore’s founder Sir Stamford Raffles near the beautiful buildings of the Asian Civilisations Museum and the Victoria Theatre.  The temperature was approaching 35 degrees and we were beginning to wilt in the heat until ice creams and cold drinks revived us, giving us the much needed energy to continue.

It was then back inside an air-conditioned building for the next couple of hours as we thought it would be interesting to visit the National Gallery of Singapore which overlooks the Padang, an open playing field and home to the Padang Cricket Club.  Standard admission to the art museum is SG$20 (£11.20) and free for Singapore residents.

The museum has only been open since November 2015 and already houses the world’s largest public collection of Singaporean and South East Asian art.  This vast museum is located in two of Singapore’s colonial buildings which are integrated via link bridges combining both old and new architecture beautifully.  As a national monument certain aspects of the building could not be altered and this made our visit all the more interesting.

We collected audio guides so that we could tour the museum at our own pace and started our tour in the former City Hall, a neo-classical masterpiece with a facade of 18 Corinthian columns facing The Padang.  A large bamboo sculpture entitled ‘Cargo’ hangs from the City Hall foyer and this striking piece of artwork is in fact a scale model of two 20ft shipping containers.  The galleries in this part of the museum focus on modern and contemporary art from the 19th century colonial period presenting the culture of Singapore in art and are equally interesting viewed from an historical perspective.

The former City Hall chamber, once the grandest room in Singapore and where the Japanese surrender at the end of World War II was formalised looked resplendent with its marble pillars. A temporary exhibition on minimalism was on display there and one of the museum guides was on hand to kindly explain to us about its emergence in the 1960’s and how it has changed the way art objects are experienced.

Moving across to the former Supreme Court section the galleries present the history of South East Asian art across the region.  I particularly liked this wing of the building as not only does it contain some impressive art work but is also architecturally beautiful.  The galleries are based in and around four wood panelled court rooms retaining their original appearance.

Amongst the courtrooms is a magnificent central rotunda with a dome that was originally designed to house a circular law library.  There was even an opportunity to view the holding cells below the court room which appeared very spartan.

Before leaving the museum, we took the lift to the rooftop Coleman Deck where we found a cafe/ restaurant with an outdoor terrace overlooking the Padang and colonial district.  The rooftop also features a large mirror pool with seating where we relaxed awhile.

It had been quite a hectic day exploring the main sights of the Civic District but we couldn’t resist the temptation of a visit to a postal museum that was located nearby.  The Singapore Philatelic Museum, standard admission SG$8.5 (£4.76) covers two floors and contains everything post related from stamps to post boxes and franking machines.

Although we are British, we learnt something new as we were unaware that the U.K. is the only country not to display its name on its stamps and only features the monarch’s head.

Other galleries focussed on letter writing, and a room of rarities displayed Singapore postage stamps from their earliest days to stamps made from unusual materials.  The museum was interesting but perhaps a little dated.  For this reason it closed for a complete revamp two weeks after our visit and isn’t due to re-open until December 2020.  I’m sure it will return with an updated format and I’ll look forward to visiting again on a future visit to Singapore.

By the time we got back to the hotel we were too late to relax by the pool or to take a sauna as they both closed at 7.00 p.m.  Instead, we had a rest in our room and then ate dinner in a small restaurant just around the corner from the hotel which turned out to be very good.  A short walk followed but after such a busy day we were soon tucked up in bed for an early night.

Sentosa and the Singapore Botanic Gardens