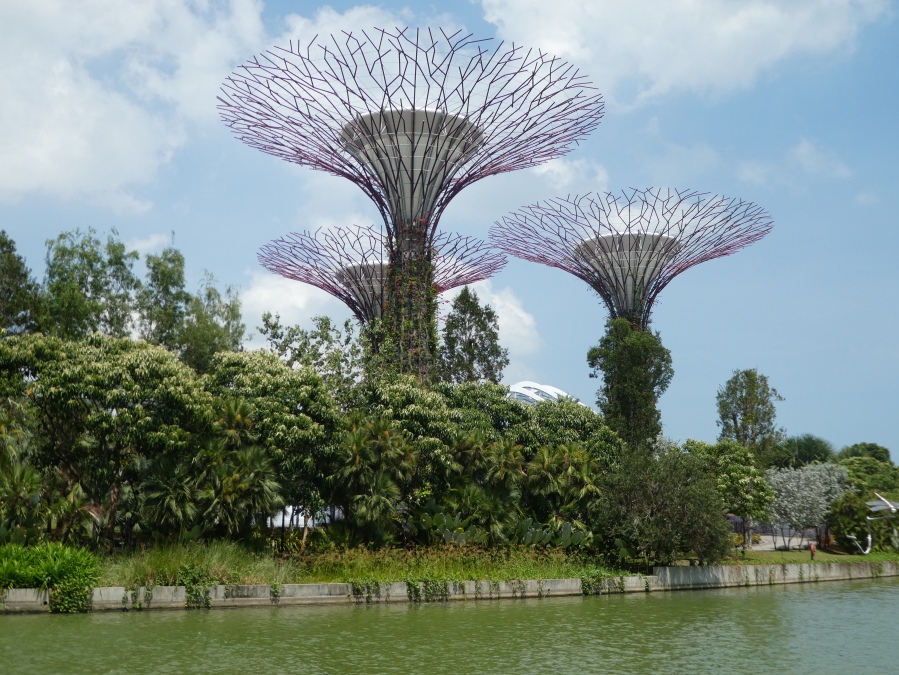 After a good night’s sleep, we were interested to find out what breakfast would be like.  Although the Orchard Grand Court is a serviced apartment, it also offers guests the option of an inclusive breakfast in its Crystal Cafe.  Unlike the apartments which have a contemporary feel, the Crystal Cafe is a traditionally furnished restaurant with wood panelling with its own entrance just around the corner on Killiney Road.

Decorations still adorned the walls as a lasting reminder of the Chinese New Year celebrations some time ago.  A large buffet selection of hot and cold breakfast items was laid out in the centre of the restaurant and we feasted on fruit, yoghurt, steamed dumplings and chocolate croissants helping to set us up for a day of sightseeing.

Leaving the hotel, we took a bus to the Arab district of the city making use of our Ez Link cards.  Do remember that if you are travelling on buses in Singapore it’s important to also tap out as you alight the bus as the fare is charged on distance travelled.

During Singapore’s early history, under Sir Stamford Raffles orders, the colony was divided according to ethnic groups to include European, Chinese, Arab and Indian.  Our morning walk took us first to Kampong Glam, north of the Singapore River.  After leaving the bus we walked through the grounds of the Malay Heritage Centre which had yet to open for the day.

From there we were able to get our first glimpse of the Sultan Mosque which is the major focal point of the district, standing majestically at the top of Bussorah Street.  This impressive building has pink coloured walls and large onion shaped golden domes.  Each dome is decorated with glass bottle ends which were donated by lower income Muslims during its construction.  The reason for this was to enable all Muslims, whatever their means, to be able to contribute to the mosque’s construction.  Morning prayers were in progress at the time of our visit so we didn’t have an opportunity to look inside and view its huge prayer hall.

In recent years the district has been beautifully restored with many of its original colourful shophouses converted into cafes, art galleries and gift shops still retaining strong links with the Malay and Muslim community.

Our stroll continued along to Little India by which time we were feeling hot and thirsty so we popped into a small cafe for glasses of freshly blended watermelon juice.  Feeling refreshed, we set off again to explore its narrow streets with brightly painted shophouses.  Filling the air was the heady aroma of spices drifting from cafes, food shops and street vendors.

Little India is home to both Hindu and Buddhist temples and we managed to seek out two of them.  Located on Serangoon Road is the Sri Veeramakaliamman Temple.  Easily recognisable from afar with its tall entrance tower, this temple is decorated with hundreds of small ornate sculptures of figures from Hindu culture and mythology.  The temple is dedicated to the Hindu goddess Kali and its architectural style is that of southern Indian Tamil temples.  A little further along the road stands the Sri Srinivasa Perumal Temple which is one of the oldest in Singapore, dating from 1855 and dedicated to Lord Vishnu.

We explored more of Little India’s bustling narrow streets and took a look inside the Tekka Centre which is Singapore’s largest indoor wet market selling a vast array of fresh produce.  Upon entering, the pungent smell of raw fish made me feel slightly nauseous but after moving away from the fresh fish counters I soon felt better and became used to the odour.

Leaving Little India we took the MRT from Jalan Besar over to Chinatown to complete our tour of the three cultural enclaves.  As we came out of the metro station it was impossible to miss a giant pink pig straddling the road junction celebrating the Year of the Pig.

We began our tour of the area by strolling along Keong Saik Road with its quaint former shophouses now home to Chinese restaurants and gift shops.  We continued along to a covered street where dozens of stalls were trying to persuade the crowds to buy anything from electronic gadgets to football shirts.  Our legs were starting to feel a little tired again so it was a good excuse to pop into the Chinatown Point Mall for some ice creams and to consider what to do next.

The complex also includes a 300 store high-end shopping mall, known as the Shoppes of Marina Bay Sands where we found a canal running the entire length of the mall.  Its design is similar to that of The Venetian in Las Vegas but instead of gondolas, here one can take a ride in a sampan.

The lotus inspired ArtScience museum is equally impressive and boasts a retractable roof. It is surrounded by a beautiful mirror pool filled with flowering water lilies. and lots of seating to relax and enjoy the views.

Continuing our tour of the Bayfront area we crossed the Meadow Bridge which leads to the entrance of the Gardens by the Bay.  These national gardens are a showpiece of garden art as they present horticulture in a totally different way.  Admission to the gardens is free of charge but tickets need to be purchased to enter the flower dome and cloud forest conservatories.  Tickets are also required to access the 22 metre high OCBC Skyway which connects two of the towering Supertrees via a 128 metre long elevated walkway.

The gardens are divided into three distinct sections and as they are so large we decided to focus our attention on Bay South which is the largest of the three gardens.  Dominating this garden are 18 Supertrees, ranging in height from 25-50 metres. These stunning tree like structures are futuristic vertical gardens with their own eco-systems and are home to many plants including ferns, vines and orchids.

We had envisaged the gardens to be crowded on a Sunday afternoon but being so large it didn’t feel busy at all.  After spending the afternoon wandering around the lakeside paths we made the decision to return later in the evening to watch the Garden Rhapsody music and light show.

This free spectacle at the Supertree Grove takes place each evening at 7.45 and 8.45 p.m. and lasts 15 minutes.  We found a good vantage point a few minutes before the start sitting on some stone steps and were mesmerised as the gardens came to life with the synchronised light and music show.  The programme changes every few weeks and on the evening of our visit we were treated to ‘The Enchanted Wood’ performance.

The show began by discovering the enchanted tree and then took visitors on an adventure filled with magical beings and mystical beasts with a soundtrack of choreographed music.  It was the perfect end to our first full day in Singapore and one we had enjoyed enormously.