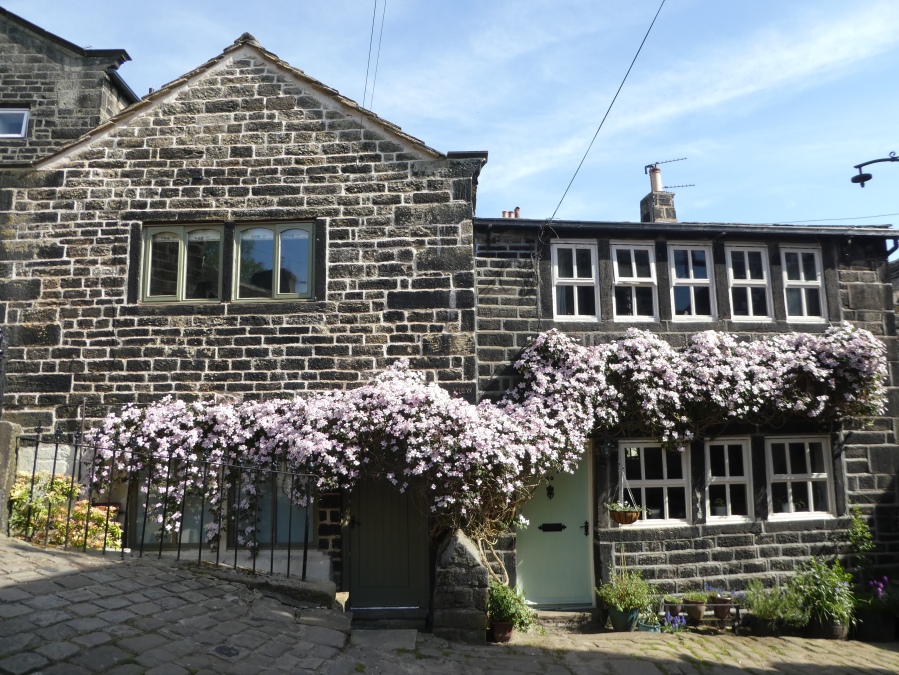 Our short break in the picturesque South Pennine town of Hebden Bridge was nearing its end and we reluctantly packed our belongings into the car and bade farewell to Josephine, the friendly owner of the Croft Mill Aparthotel where we’d enjoyed a two night stay.

It was then only a short drive up to the charming village of Heptonstall which is perched high on a hillside overlooking Hebden Bridge with the Calder Valley below.  The road up is steep and winding, becoming narrower as it reaches the top with passing places in case one meets another car on its way down.  For those using public transport, an hourly service runs from Hebden Bridge and for hill walkers it’s a 6.5 mile (11 km) round trip with some steep climbs near the top.

We followed signs to a large free car park on the edge of the village and from there it was only a short walk to the village centre.  It’s a village where time has stood still, a sort of Haworth in nearby Bronté country without the tourists.  Heptonstall is a wonderfully preserved village which has seen few changes over the last 200 years.

The village was a centre for hand-loom weaving, its cottage windows designed to allow maximum light to filter through and a reminder of the times when weavers worked from their own homes.  Heptonstall even had its own cloth hall where the finished work was traded before nearby Halifax got its magnificent Piece Hall.

Its steeply cobbled main street Towngate has two pubs, a village shop and cafe but little else.  One of its pubs, The Cross Inn is believed to have been in existence since the early 17th century and was open for business as we strolled past.  Slightly further uphill on our left we came to the village churchyard which is unusual as it contains not one but two churches.  Many of the gravestones have been laid flat and form a pavement, their inscriptions now difficult to decipher after many years of wear.

Of the two churches, the first one we came to was the St. Thomas a Becket which is now in ruins.  It was named after the Archbishop of Canterbury who was murdered on the order of the King just before building work commenced on the church.  This church was damaged by strong winds in 1847 and so it was decided to construct a replacement across the churchyard which was built at a lower height in the hope that it would withstand the worst of the Pennine weather.

Just outside the new church’s porch we noticed a gravestone commemorating a nagging wife but it is the gravestone of a more famous wife that brings many visitors to Heptonstall, that of the American poet Sylvia Plath.  Her grave can be found in the newer part of the churchyard across Back Lane.  Plath was the first wife of the late Poet Laureate Ted Hughes who spent his early years in nearby Mytholmroyd.  She committed suicide in 1963 and her grave bears the inscription ‘Even amidst fierce flames the golden lotus can be planted’.

To one side of the churchyard lies Heptonstall Museum located in the old grammar school building which was founded in 1642.  It would have been interesting to look inside but it is only open at weekends so hopefully we will be able to return on another occasion to visit.

We then slowly made our way back to the car to continue on to the market town of Todmorden which lies on the border with the neighbouring county of Lancashire.  We’d arrived on a market day (Wednesday to Saturday) and each of the car parks was already full but not letting this put us off, we managed to find a parking space along a street slightly further on.

The town was a prosperous wool producing centre with its mills alongside the Rochdale Canal and wealth at that time is evidenced by its impressive town hall.  Free tours of the town hall take place on the first Sunday of each month but visits can be arranged at other times on request.  On the day of our visit the building was actually open for another event so we were fortunate to get access and be able to walk up its sweeping staircase.  From there we viewed the magnificent ballroom, mayor’s parlour and council chamber.  A definite must if you are in the area.

Across the road from the town hall lies quaint Water Street filled with interesting small shops and cafes.  A restaurant now operates in the old Co-op, retaining its original shopfront which was so nice to see.

Our stroll then led us to the canal where we had a short walk along the towpath of the Rochdale Canal.  Crops of apple trees, beans, fennel and much more have been planted along the towpath and this is part of the Incredible Edible Todmorden project.  This wonderful scheme began as a seed swap and in the last ten years has grown into a huge community project.

Raised beds full of fruit and vegetables are to be found everywhere in the town.  Without searching them out, we spotted beds outside the police station, around the market and in the grounds of the health centre.  The aim is to provide food to share with anyone who wants to pick it, with the project being self funded from voluntary donations.  What an amazing idea!

Last but not least, our walk ended in the indoor market hall.  To be honest, I wasn’t expecting much but it was a joy to behold with attractive stalls selling high quality produce and some inviting cafes just waiting to be sampled before our journey home.

Well, what a splendid time we’d had exploring the rugged South Pennines.  Hebden Bridge was an absolute delight and an excellent centre for touring the neighbouring small towns and villages.  The weather was on our side with wall-to-wall sunshine the entire time helping to make our trip to Calderdale even nicer!

I would like to thank Visit Calderdale for helping to make this visit possible,  as always all views and opinions are entirely my own.

A Weekend in York