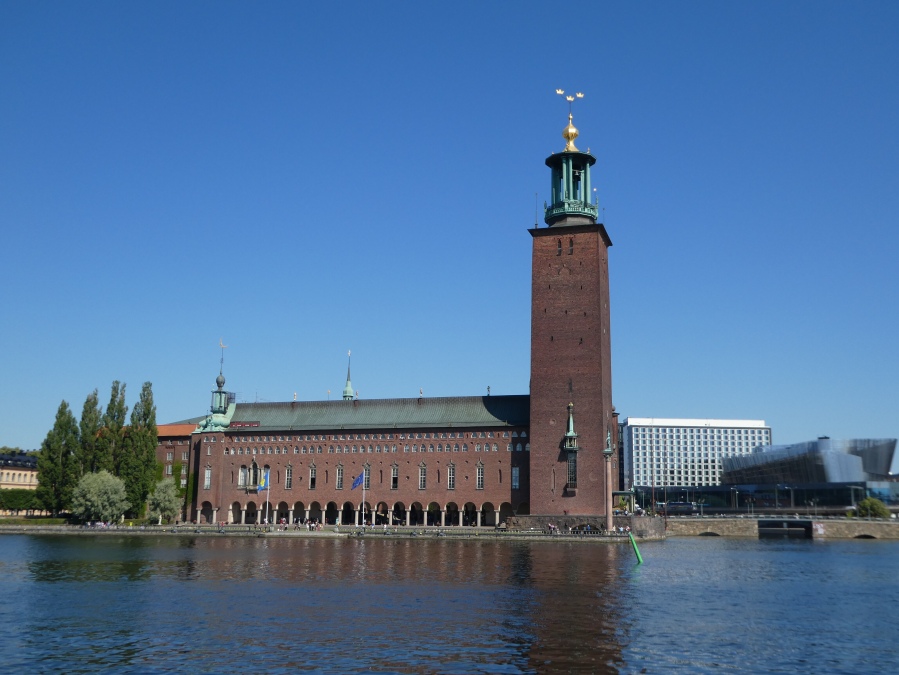 After a good night’s sleep we woke feeling refreshed and prepared ourselves a breakfast of eggs, yoghurt, rye bread and marmalade plus several cups of coffee.  It was a glorious, sunny morning as we left the apartment at 9.30 a.m. and wandered down the hill to Solna Centrum metro station.  Getting into the city centre takes only ten minutes along the blue line and we were soon at T-Centralen where we popped into the Tourist Information office on Sergels Torg for some maps and leaflets.  The Stockholm metro operates as a single zone with passengers not required to tap out on exiting the stations.

Finding our bearings, we then headed down the shopping street Drottninggåtan towards the sea, turning right along the waterfront to the City Hall which took us around 15 minutes.  Stockholm City Hall is a political building and as such visits can only be made by joining public tours.  Tickets cannot be pre-arranged but can be booked on the day with adult admission SEK 110 (£9.50).  Several tours were starting at the same time and these were divided by language and our English speaking tour with approximately 28 other visitors commenced in the Blue Hall.

Stockholm City Hall is one of Sweden’s most famous buildings and is famous for its grand ceremonial halls and unique pieces of art.  The Blue Hall is the larger of the two banquet halls and can accommodate up to 1,200 guests and is the venue for the annual Nobel Prize banquet held on 10th December each year.  It resembles an Italian piazza except for its roof and this magnificent hall is also used for degree ceremonies and various private functions.

Our tour guide was very informative as we toured numerous rooms of this ornate building.  Moving on through the Tapestry Room to the Council Chamber our guide explained that this is where the City Council assemble every third Monday.  The Council Chamber is very grand and its 19 metre high ceiling takes its inspiration from the Swedish Viking age.  There is a public gallery with seating for up to 200 members of the public who may wish to attend a council meeting.

Next, we strolled through the beautiful Oval Room where wedding ceremonies take place each Saturday afternoon.  It was interesting to learn that anyone can get married in the City Hall with weddings taking place every 15 minutes, and the actual ceremony lasting only five minutes.  It was then time to inspect the stunning Golden Hall which has more than 18 million pieces of gold mosaic depicting scenes of Stockholm’s history on its walls.  The stunning mosaic of the Queen of Mälaren receiving homage from the East and West covers the entire north wall.  Events taking place here range from formal ceremonies to the traditional dance following the Nobel banquet.  The tour lasted 45 minutes and after it had finished we worked up an appetite for lunch by climbing to the top of the City Hall tower.  Numbers are strictly limited so it’s best to arrive early to avoid disappointment.  The tower is open daily from May to September and is 106 metres tall.  Tickets to climb the tower cost SEK 50 (£4.30) with tours every 40 minutes.

I’m becoming quite an expert in climbing towers these days but this one was actually one of the easiest with its wide staircase followed by some sloping narrow passageways and then ending with a short spiral staircase to the top.  At the mid-way point we paused for breath looking around the Tower Museum where we admired a huge stone statue of Eric, the patron saint of Stockholm.  The weather couldn’t have been better and our efforts to reach the top were rewarded with some breathtaking views over Stockholm.

It was scorching hot when we returned outdoors so we tried to keep in the shade as much as possible whilst exploring the maze of narrow, winding streets of the quaint old town.  The main square, Stortorget has some charming, brightly coloured houses and is also home to the Nobel Museum.

Continuing along the waterfront towards Slussen the harbour was busy with yachts, steamers and ferries plying across the water.  Slussen is currently undergoing major construction work.  There were large wooden fences obscuring our view and narrow walkways that slowed our progress.  Located at the mouth of Lake Mälaren it is the junction of rail, road and boat traffic entering the city centre and is the second largest public transport hub in Sweden.  It’s SEK 12.1 billion redevelopment project which began in 2016 is not scheduled to be completed until 2025 and involves building a more effective transport hub and redesigning the surrounding area so it will be a bit of a mess for several years to come.

Finally, we made it to the Fotografiska Museum in the Södermalm district which opened in 2010.  It is reputed to be one of the world’s largest meeting places for contemporary photography featuring the work of world renowned photographers and upcoming talents.  Admission is SEK 145 (£12.30) with the ground floor displaying a permanent collection of photographs whilst the remainder of the space is used for temporary exhibitions.

The top floor houses a restaurant and cafe/ bar with stunning views across the water.  It would make a beautiful setting to watch the sun set whilst enjoying a meal.  After finishing looking at the collection of photographs we walked along to Slussen metro station and caught a train to Östermalmstorg where we had a stroll along the calm, leafy avenues of this fashionable district lined with designer stores.  Heading towards the sea we came across Hallwylska Museum, the former home of Countess Von Hallwyl which was built as a winter residence in 1898.  Walter and Wilhelmina Von Hallwyl were among the wealthiest people in Sweden at the end of the 19th century.

There is no charge to look around the house but bags and coats need to be placed in free to use lockers and cannot be carried around.  Stepping through the doors of Hallwyl House was like walking back into a bygone era.  The rooms have been left untouched and we enjoyed exploring the house with its sumptuous furnishings decorated in historical styles but also equipped with all the latest technical innovations of the era.

Wilhelmina created vast collections of art, ceramics, silver, weapons, textiles and antique furniture which were all on display.  Hallwyl has a beautiful courtyard bar which seemed very popular.  A sign informed us that live jazz would be taking place later but we were by then quite tired and decided to return to our accommodation after a busy day.