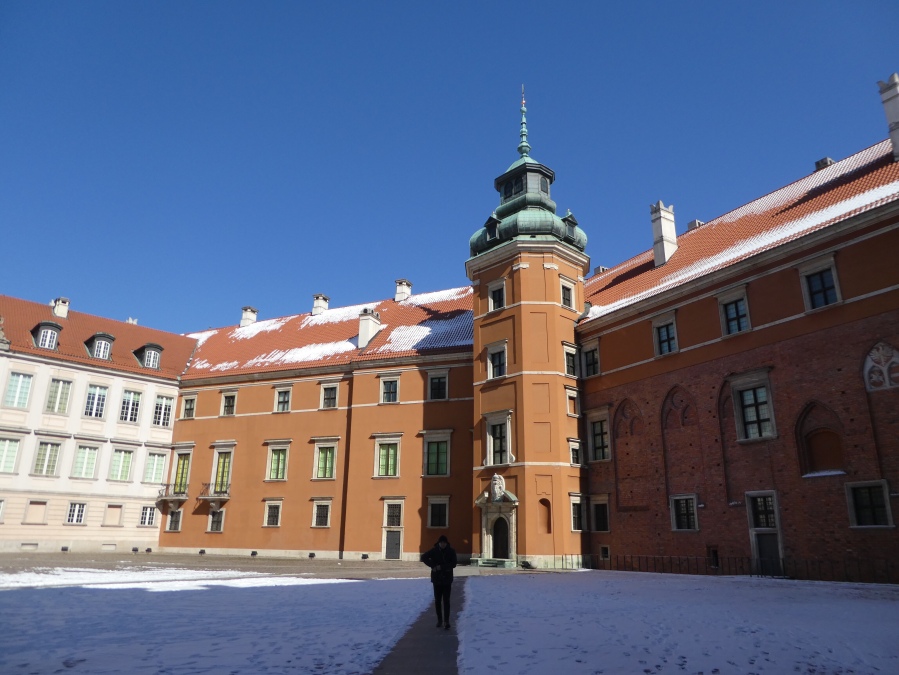 A bright, sunny morning to start the final day of our short break in Warsaw so after breakfast we took the bus to the old town which was looking so much nicer than on our earlier visit.

We started our tour in the old town market place with its Dutch inspired houses. The pedestrianised cobbled square is a delight with its colourful buildings and the statue of the Warsaw mermaid as its centrepiece, The Warsaw mermaid is the symbol of Warsaw and appears on its coat of arms.

Surrounding the square are numerous cafes, bars and souvenir shops and I’m certain it comes to life in the summer months when people are able to sit and relax on the restaurant terraces.

Just off the square stands the Royal Castle which dates back to the 14th century. It has been the residence of Polish kings, the President and the seat of parliament and was painstakingly reconstructed between 1971-1984. Entrance to the castle is 30zl (£6.20) and is not included in the Warsaw Pass. Fortunately admission is free on Sundays so we were able to take advantage of this .

After leaving our bags and coats in the cloakroom, we followed a self guided tour of the Kings’ apartments which were heavily adorned with artwork. The tour also included the Great Assembly Hall and chapel. Down in the basement, we found the exhibition ‘Destruction to Reconstruction’ of interest as it detailed the demise of the original castle together with the rebuilding project.

After retrieving our coats, we set off along the first part of the Royal Route which begins in Castle Square and continues to Lazienki Palace ending at Wilanów, both of which we had already visited.

Nowry Swiat Street, along the Royal Route is one of Warsaw’s historic thoroughfares and is lined with impressive neo-classical buildings. We tried to go inside the Church of the Assumption of the Virgin Mary but a service was taking place so we just admired it from the outside.

Our next stop was at Gosciniec in the old town which serves traditional Polish food. The restaurant was already busy with lunch-time diners and we needed to wait a few minutes for a table but it was worth the wait as our meals were delicious. We ordered a skillet of fried dumplings and a plate of pork and potato pancakes to share. The bistro seemed to be popular with locals and despite not hearing about it before, we enjoyed our lunch and would recommend Gosciniec for its food, ambience and reasonable prices.

We still had a little time to spare before returning to the airport so we continued along to the main building of the University of Warsaw and explored its attractive campus.

From there, we took the metro to the central railway station and then caught the hourly service to Modlin station taking 35 minutes. Tickets cost 19zl (£3.95) and include the ten minute shuttle bus to the airport, so allow one hour for the entire journey.

Modlin airport is very small with few facilities.  There is an airside cafe but it only has a small seating area. Our Ryanair flight departed on time and arrived back in the U.K. ten minutes ahead of schedule. We very much enjoyed our short break in Warsaw and would recommend the Polish capital for a pleasant city break. We made good use of our Warsaw Pass visiting many of its attractions. There are more places we would like to explore in and around the city so hopefully we’ll be back sometime soon to see more.

I would like to thank Visit Warsaw for helping to make this short break possible. As always all opinions are my own.