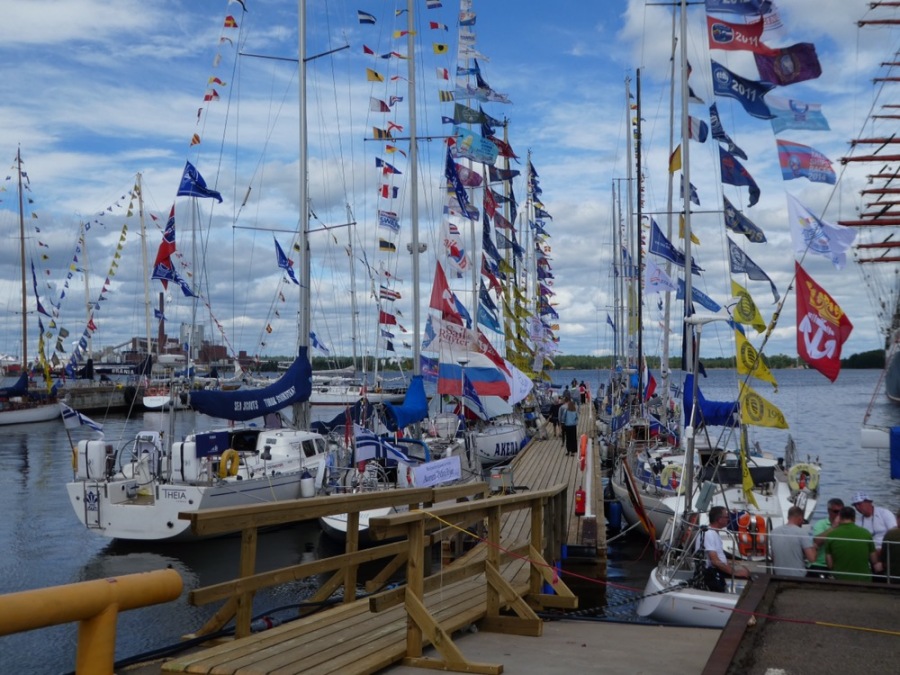 Having previously enjoyed seeing the Tall Ships in Helsinki in 2013 we were keen to catch up with them again, this time in Kotka.  Located on the south coast of Finland, Kotka’s city centre is situated on Kotkansaari island.  Getting from Helsinki was very easy, we booked with Onnibus who have regular daily services between the cities,  are inexpensive and have comfortable coaches with pre-bookable seats.  The journey took approximately 90 minutes and it was then only a short walk to the port area to view the Tall Ships.

The Tall Ships Races are part of the international youth sailing event attracting approximately 3,000 sailors in 73 boats from 20 countries.  The boats had all arrived in port the previous day and were an impressive sight lined up along the quay with their brightly coloured flags fluttering in the gentle breeze.

It was possible to board many of the larger ships and to get a feel of what life on board is like.  The Royal Navy of Oman’s ship, Shabab Oman II was particularly impressive.  This boat had only been in service for three years and is a blend of traditional and modern with luxurious interiors coupled with authentic tall ship wooden decking, sails and rigging.  On boarding a Polish boat we were offered mugs of home made soup which was both welcome and delicious.

Standing at one end of the port is the Maritime Museum of Finland which has a 300 metre long sloping roof accessed from ground level with good views of the boats.  As part of the Tall Ships festival the museum was offering free admittance to the Tarmo icebreaker which has permanent moorings alongside the quay.  Being interested, we clambered on board the ship which was built in Newcastle-upon-Tyne, England.  Our self guided tour proved extremely interesting and was an unexpected bonus to our visit to the Tall Ships.

After several hours spent admiring the boats we decided to take a look around Kotka as we hadn’t visited previously.  The market square had a collection of fruit and vegetable stalls, outdoor cafes plus a temporary stage for the festival.  Not far from there we wandered through Isopuisto Park which had been constructed around the Orthodox Church of St. Nicholas built in 1801.  The park has been designed to resemble an English style landscape garden reminding us of home.

Near the small boat harbour we joined crowds lining the streets to watch the crew parade which takes place in each port.  Crews from the 73 international boats taking part made their way slowly along to enthusiastic cheers.  Some crews wore fancy dress whilst others wore full naval uniform often pausing to sing and dance in styles reflecting their homeland.  Prizes were awarded in several categories for crews participating in the parade.

Feeling happy that we had been able to watch the crew parade, there was just enough time to explore the Sapokka water garden and the small boat harbour on the southern shores of Kotkansaari.  It was more attractive along here than in the port area and on a future visit I’d like to explore this area in more detail.

Attractive small cafes overlook the harbour with outdoor terraces taking in the scenery.  Glancing at our watches there was sadly insufficient time to stop for a drink as our bus back to Helsinki was due to depart twenty minutes later.  Unsurprisingly, we were soon fast asleep on the return journey to Helsinki after enjoying a splendid day out in Kotka.  Hopefully we’ll have an opportunity to return one day to explore the waterfront in more detail.