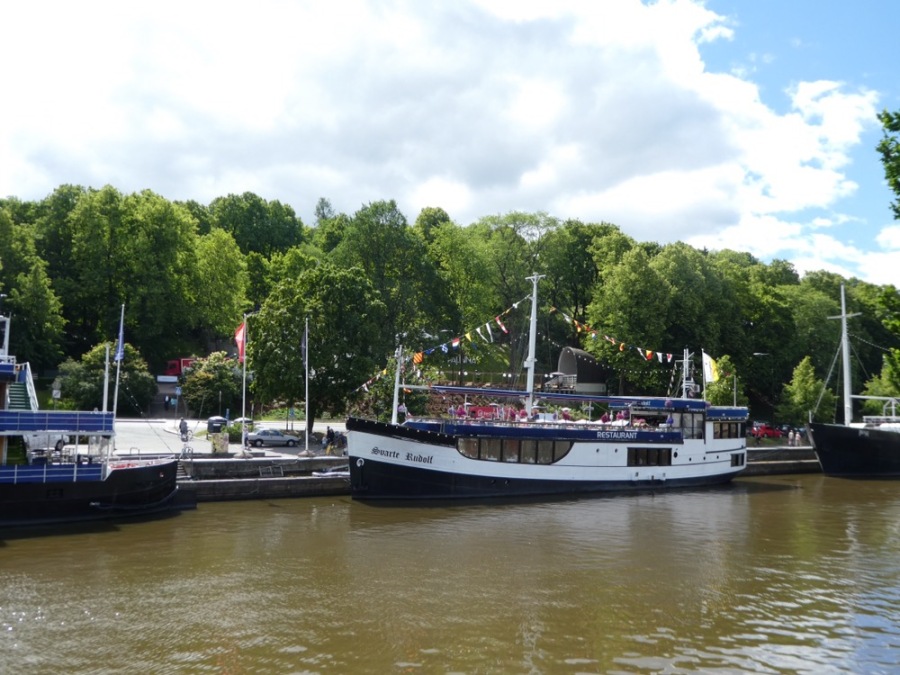 A second chance to admire the Tall Ships this summer as they sailed from Kotka to Turku in south west Finland.  Getting there was easy, travelling by Onnibus once again and by booking the tickets early it didn’t cost very much.  The journey time from Helsinki to Turku was approximately two hours but with comfortable seats and free wi-fi the time sped by.  Buses now stop in a central position midway between the main square and the river making it convenient to get around.

It was around 12.00 noon as we joined the crowds along the banks of the Aura river, a perfect setting for the Tall Ships festival.  Boats lined each quayside enabling visitors to admire the boats from the riverbank and climb on board to view the larger ones.  Turku always looks at its best in the summertime with its many riverside cafes and restaurants having outdoor terraces adorned with flowers.  We chose one of these restaurants for lunch and found a table with ease.  After paying for our food we then had to queue ages for the buffet which didn’t make for a relaxed lunch but it’s not every day that the Tall Ships are in town so we didn’t mind too much.

After lunch the earlier sunshine was replaced by low cloud and a chilly breeze but we were spared rain whilst we continued our stroll alongside the ships.  There was quite a queue to take the ferry across the river as it only holds 75 passengers.  The small orange ferry (Föri) has taken passengers back and forth across the Aura river since 1904.  The journey takes around two minutes and there is no charge or timetable as it runs non stop throughout the year unless the river is frozen.  It’s located approximately 500m after the last bridge heading towards the mouth of the river.

A stroll on the opposite bank followed where more of the boats were moored and little stalls tempted us with Finnish specialities of dark rye bread, salmon and cheese.  There was still enough time to look around the centre of Turku before our bus departed so we headed to the market hall which is Finland’s second oldest being constructed in 1896, seven years after the Helsinki one first opened.  Inside, the market hall is like stepping back into bygone days with its dark wood traditional meat and fish counters, delis and cafes.

Just around the corner from the market hall is the market square where we found some outdoor market stalls where locals were stocking up on cartons of freshly picked juicy berries and bunches of summer flowers.  On one side we found a quaint little cafe in an old tram and dominating the square is the large green dome of the Turku Orthodox Church.

After a refreshing cup of tea we strolled down the road to where we needed to catch our return bus to Helsinki which arrived promptly.  Not long afterwards we were sound asleep, just waking as the driver announced our arrival back into Kamppi bus station.  My previous Turku post details more things to do in the city and this can be found here.

A walk to Tervesaari island, Helsinki