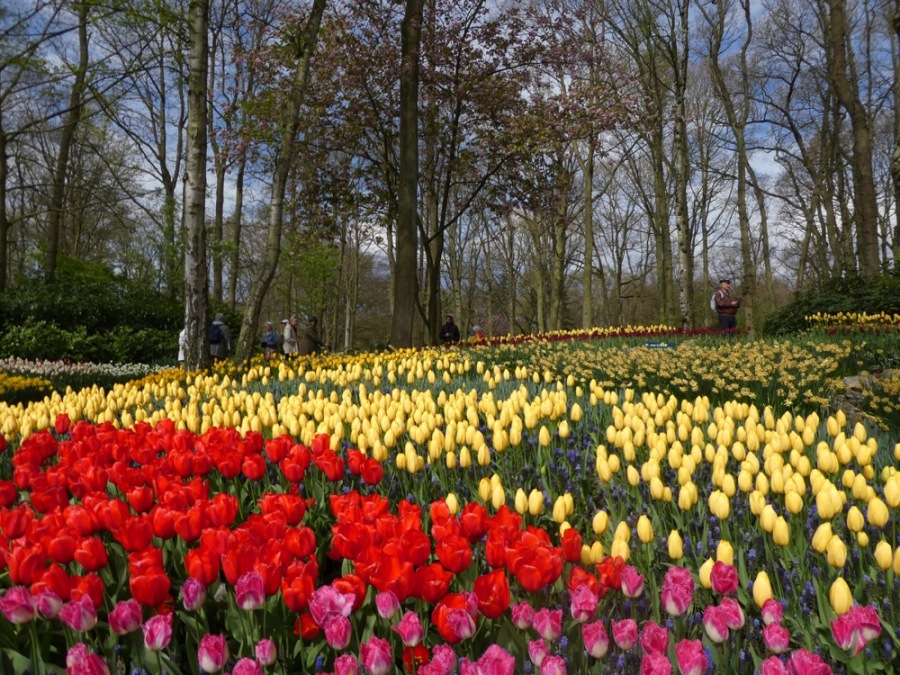 Breakfast was not included in the room rate and at €15 per person we thought quite expensive, especially as it’s actually taken in the building opposite.  Instead, we decided to nip out to the Spar supermarket a couple of minutes walk away and buy some croissants, ham, eggs and yoghurt ourselves as our studio had a fully equipped kitchen and dining table.

A sunny start to the day so a visit to the Keukenhof Gardens was our plan.  Shuttle buses run from Schiphol Airport which was only a short train ride from our base in Sloterdijk.  I’d checked in advance to note that the buses depart from Schiphol Plaza outside the Arrivals Hall but as this area is huge it took us some time to find the bus stop we needed which was labelled with a giant inflatable tulip.  What we hadn’t anticipated though was the length of the bus queue, it was as long as the eye could see but thankfully as soon as one bus filled up, another one came into position and the queue moved swiftly on.  Combo tickets covering both admission to the gardens and the 30 minute shuttle bus could be purchased but as we already had regional travel passes we just needed to pay €16 each to enter the gardens.

The gardens are open for only eight weeks each year between mid March and mid May and last year attracted 1.1 million visitors, 75% from overseas.  Keukenhof is huge, covering 32 hectares and although there were many people around, it never felt overcrowded.  The skilful planting with such colourful flowerbeds was amazing and I think that everyone would enjoy a visit whether they were interested in gardening or not.

In order to ensure that Keukenhof has a new look each year the plants are dug up and harvested after flowering and a further 7 million new bulbs are planted each autumn in different layouts.  The bulbs are supplied free of charge by bulb growing exhibitors enabling them to showcase their products to such a large audience.

In addition to viewing the colourful bulbs, there were several pavilions to explore.  In the Beatrix pavilion we found exquisite orchid displays whilst the Willem Alexander pavilion focused on varieties of lily.  The large, centrally located Oranje Nassau pavilion displayed the use of plant bulbs and cut flowers indoors with some stunning arrangements for us to admire.  The gardens have several attractive cafes with both indoor and outdoor seating depending on the weather and we had no difficulty finding a table for our morning coffees.

It was around 2.00 p.m. when we left the gardens and at that time there was no queue to return to Schiphol by bus.  A short rest followed back in our hotel and then, as it was still sunny, we decided to make a late afternoon visit to the small town of Edam, famous for its cheese.  To get there we took the train into Amsterdam Central (6 minutes) and then caught Bus 314 from the rear of the station.  Buses run at approximately 15 minute intervals to Edam and the pleasant journey with canal side views most of the way took around 30 minutes.

Edam was smaller than I had expected but what it lacked in size it made up for in charm.  Narrow lanes with drawbridges cross canals, many homes having gardens backing onto the water and some, even, with their own moorings and boat.  The centre of town has numerous small shops many selling the local Edam cheese.  I hadn’t realised that it’s available in several varieties, on tasting I preferred the one’s made from goat and sheep’s cheese best.

Near the ornate town hall is an unusual, wide humped backed bridge over the canal which has some attractive wrought iron seating.  Feeling thirsty, we found a pub with a sunny, canal side terrace where we enjoyed a couple of beers.  From our seats we spotted several geese, ducks, grebes and one black swan all waiting eagerly as one little boy was feeding them some bread.

It was approaching 6.00 p.m. so we decided to make a move and return to Amsterdam and, after eating, we enjoyed an evening stroll starting from where we ended the previous night at Waterlooplein.  Our walk led us along the wide Amstel canal through to Rembrandtplein, a lively part of town with bars and cafes spilling out onto the pavement.  A coffee stop followed before we raised the energy to walk back to Central Station for the train back to our hotel.