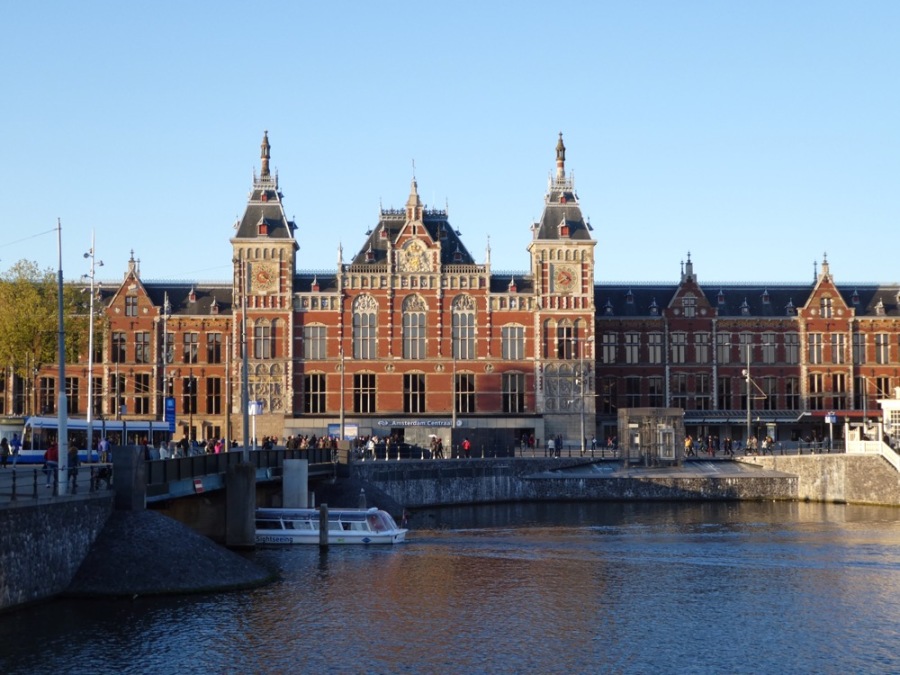 We needed to be up at 03.15 a.m. for our early morning flight to Amsterdam from Leeds Bradford Airport.  Deciding to drive, we left our car at the Sentinel long stay car park, managing to find a discount code to reduce the price slightly.

Our flight with the Dutch national carrier KLM on an Embraer 190 Cityhopper service departed on time at 6.40 a.m. and in just under one and a half hours we landed into Amsterdam’s Schiphol Airport.  During the short flight we were served a snack box containing a cheese sandwich, biscuit and water, with hot drinks served slightly later.

Our accommodation was near Sloterdijk station so we took the train two stops from the airport to our home for the next four nights at Hotel2Stay, a new apart-hotel which had only been open a few months.  As it was only 10.30 a.m. when we arrived at the hotel’s reception it was no surprise that our room was not ready, but we were able to leave our luggage until later in the day.

The hotel was only five minutes walk from Sloterdijk’s transport hub having rail, bus, metro and tram connections available.  Trains into Amsterdam Central Station take only 6 minutes and depart every few minutes, making Sloterdijk a convenient location for our stay.  This was my third visit to Amsterdam, the first time I travelled by ferry from Hull to Rotterdam and last time I flew from Manchester but that was 20 years ago so a return visit was long overdue.

Dam Square was crowded with people enjoying a temporary funfair, a Ferris wheel obscuring our view of the square’s stunning architecture.  From there, we turned left to Oude Kerk (old church) passing De Waag (weigh house) and the Rembrandt House on our way to Waterlooplein.  Rain then started to fall as we crossed the Amstel so we took shelter under the stalls of the Singel flower market browsing the many varieties of flowering bulbs and cut flowers on offer.  Last time I was here I was tempted into buying large bags of gladioli and tulips to plant in our garden at home but this year I decided against further purchases as we have heavy clay soil which isn’t ideal for bulb growing.

We then took shelter in Magna Plaza, a neo-gothic masterpiece and the former Amsterdam main post office.  Built in 1895 it is one of the Netherlands 100 Dutch heritage sites.  The opulent interior has retained many original features and since 1992 it has been home to luxury retailers.

Across the road from here lies the Nieuwe Kerk a 15th century church in Dam Square, from where we caught a tram the short distance back to Central Station.  Walking through the station and leaving by its rear door free ferries shuttle across the broad stretch of water known as the IJ (Amsterdam’s waterfront).

The IJ is connected to the North Sea to the west and the IJmeer to the east by a series of locks.  Ferries carry up to 310 passengers, cyclists and mopeds and leave every few minutes.  There are three ferry routes departing from outside the station and we chose to travel on the service to Buiksloterweg on the north bank.  Strolling along the tree lined promenade of Amsterdam’s north bank we took a look in the modernist EYE Film Institute Netherlands building which opened in 2012.  This iconic building contains the Dutch film archive and museum of film and has an attractive cafe on its ground floor offering splendid views across the bay to the city centre.

Located next to the EYE is the A’DAM Tower featuring an observation deck and sky bar on its 20th floor, the lift taking just 23 seconds.  Hanging from the sky deck is Europe’s highest swing providing thrill seekers with an exhilarating ride 100 metres high above the ground.

A little more strolling along the waterfront followed and after taking the ferry back to Central Station we returned by train to Sloterdijk where we were able to check into our room.  The studio was just as described, very well equipped and with stylish furnishings.  The hotel has a rooftop terrace, sauna, gym and cosy lounge area.  After settling in, we popped out to a nearby supermarket for a few things and later returned to Amsterdam Central by train.  Sloterdijk is rather like a modern version of London’s Clapham Junction with trains departing every few minutes.

Our evening walk took us from the Central Station down Warmoesstraat to Waterlooplein and after stopping off for drinks we caught the metro back to the railway station to return to our hotel for the night after an enjoyable first day in Amsterdam.