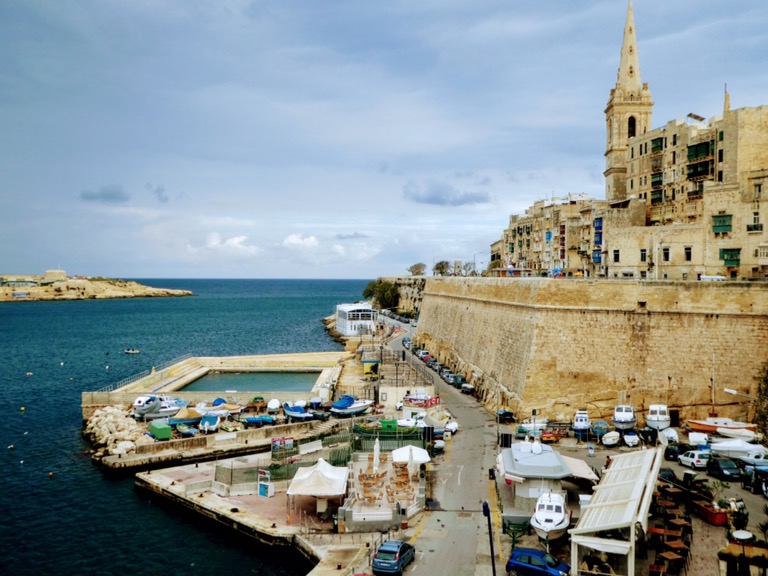 A dull, breezy morning for our second visit to the island’s capital, Valletta.  Buses from Bugibba run at approximately 15 minute intervals taking about one hour to reach Valletta.  Roads are both narrow and congested and the constant stop start motion of the bus always seems to make us feel drowsy.

It was bustling as we crossed the footbridge from the bus station into the pedestrianised old town but away from the main square we were soon able to avoid the crowds.  There are many fine sandstone buildings to admire including the National Library of Malta with its pleasant terrace cafe, featured above.

It was then onto St. George’s Square which was cordoned off to visitors on our visit last Wednesday whilst the Changing of the Guard ceremony took place.  This morning we were able to admire the sentry guards close up standing to attention outside the Grand Master’s Palace.

Feeling it was time for our morning coffees we discovered Cafe Cordina, a Valletta tradition with an elegant interior on Republic Street which was a grand affair but with affordable prices.

Feeling refreshed, our next stop was to the Argotti Botanical Gardens at Floriana not far from the Grand Hotel Excelsior and created originally for the Grand Master Pinto.  The gardens are laid out with fountains, potted palms, oleander and cacti with a small walled garden used by the University of Malta for educational purposes.  Looking out over the walled gardens we were rewarded with spectacular views of Valletta’s Grand Harbour.

A little window shopping followed before we headed back to our hotel in Bugibba by bus.  Our original plan had been to take the small ferry across the harbour to Sliema and return by bus from there but as it was windy the service was temporarily suspended.

Back at the hotel the remainder of the afternoon was spent relaxing in the spa and then enjoying tea and cakes in Cafe Mazoc chatting to the friendly bar staff none of whom appeared to be from Malta but instead from Serbia, The Philippines and the UK!   After dinner we watched the nightly entertainment for the final time in the hotel bar then returned to our room to pack up our belongings.

A Ferry to Gozo