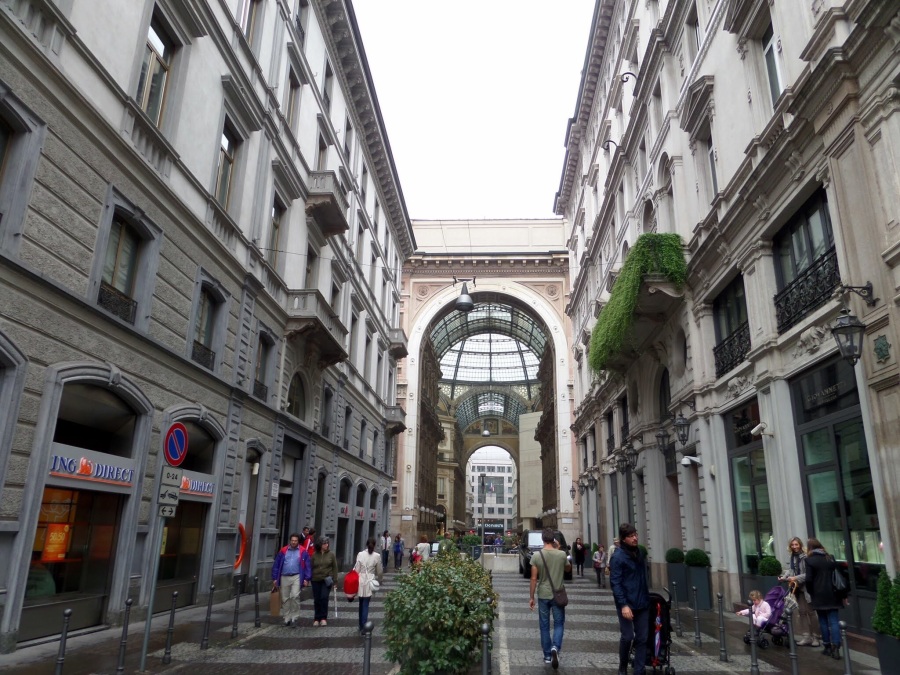 After breakfast in the hotel’s restaurant we walked to Bergamo’s railway station and bought return train tickets to Milan.  Trains depart frequently and the journey time is one hour.

On arrival in Milan’s Central Railway Station we marvelled at the ornate hall with its large, curved roof adorned with frescoes and chandeliers.

We rode the escalator down to the metro and bought day tickets for the Milan transport system.  We then took the metro to Duomo station.  It’s an amazing sight, mounting the station steps and finding ourselves in the main square with its stunning cathedral in front of us and the wonderfully elaborate La Galleria shopping arcade to our left.  There was a lengthy queue to enter the cathedral but this moved quickly and it was only a few minutes until we were inside.  We looked all around then descended into the crypt which was very ornate.

Our next stop was La Galleria which must rank as one of the world’s most beautiful shopping arcades, filled with high end stores including Armani and Louis Vuitton.  After coffee and cakes we visited La Scala Opera House and the castle with its attractive gardens.

Next, it was time to take a ride on one of Milan’s delightful old trams with their highly polished wooden seats.  We travelled to an outer suburb, had a little look around there, then took another tram back to the railway station.  The front of this grand station was undergoing renovations during our visit and didn’t look as appealing as I remembered it from my previous visits.

The train back to Bergamo was crowded but we managed to find some of the last remaining seats to rest our legs.

After a short rest at our hotel we decided to have dinner in the hilltop village of San Vigilo at the top of the second funicular.  It took some time to get there but it was worthwhile as the Ristorante Pizzeria San Vigilo had stunning views of the new town below, together with lots of atmosphere as it was very busy being a Saturday evening. We both had mozzarella and anchovy pizzas which were delicious.

A short break in Bergamo, Italy